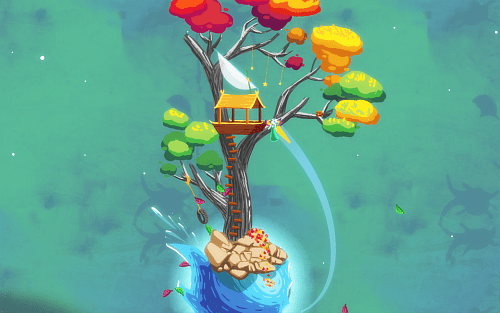 Gravity Ghost is a physics game with a twist. Run, jump, and soar around planets, using gravity to glide through the air. Explore a shattered galaxy and rescue its survivors, armed with powerups and mysterious terraforming powers. Meet the 7 magical guardians and best their challenges. There’s no killing, no dying, and no way to fail. Just hours of blissing-out to buttery-smooth gravity goodness. Featuring a dynamic new soundtrack by the composer of FTL: Faster than Light, Gravity Ghost is a headfirst dive into another world.

Gravity Ghost – WHAT WE THINK:

I was that one kid who always slavishly followed Lego instruction books while everyone else tossed them aside and built whatever came to mind. I need order and direction in my life, and while I’m sure there are a lot of interesting psychological implications there that’s probably not why you’re reading this review. My point is that I was worried when I was told Gravity Ghost is designed to run counter to gaming’s typical objective-driven gameplay.

Games that try to break the fundamental mold of what a video game is can be brilliant, but they can also be boring exercises in simplicity that hide behind the label of “art” when they’re called out on it. I’m all for experimenting—indie gaming’s ability to experiment is arguably its greatest strength—but to be different for the sake of being different is as uninspired as the mundane gameplay these developers claim to be breaking away from.

I’m telling you all this because I want you to understand the mindset I had going into Gravity Ghost. The game makes its disdain for objectives apparent right from the start—it opens with the heroine cuddling her adorable space fox, only to have it vanish before her eyes. She looks sad for about half a second, and then she’s back to normal and I’m in control. It’s not exactly compelling storytelling, but having to rescue a loved one has kept the Mario franchise going for decades, so I’ll buy it. Let’s go rescue a fox!

Five straightforward tutorial levels taught me the basics. Gravity Ghost is based on a simple concept—you move left or right around planetoids to gain momentum, then jump into the air to move from the orbit of one space rock to the next. Your goal is to touch the golden star located in each level and then exit through the red door.

Gravity Ghost makes a strong first impression. The very first level has you taking a gorgeous, soaring arc around its single moon, immediately showing off the beautiful cosmic ballet you’ll be performing once you master the game’s concepts. Of course, if you’re like me you’ll spend most of your time soaring off in the complete opposite direction of what you intended, but I think that has more to do with my own inability to understand physics than any problem with the game itself.

You keep the completed stars from each level and use them to unlock constellations (sets of levels, essentially) on the map screen. The requirements for unlocking each constellation is low, and most have at least some degree of non-linearity. That means if you get stuck on a level you’ll usually have a few more you can challenge, a smart choice for a game with such a simple objective—players won’t get frustrated and quit because of a single difficult stage.

Unfortunately, I managed to run into a nasty glitch that completely wiped my progress from the map without warning whenever I pressed the enter key (enter isn’t used in the game, but the instinct to use it anyway is hard to shake). I played a late beta and was told the final build would show a little more polish, so let’s hope the developers address this potentially game breaking problem.

Visually, Gravity Ghost is a mixed bag. Our heroine (I’m going to call her Ms. Ghost in lieu of any other name) is cartoonish, but she navigates a universe of realistic stars and nebulae. It’s a combination I found off-putting in screenshots but spectacular in motion—once you see Ms. Ghost looping around planets you’ll realize she couldn’t have been drawn as anything but a cartoon.

It’s also a style that, without spoiling too much, is perfect for some of the creatures you’ll encounter in later levels. Everything’s hand painted, and you can sense the love and care that’s been put into this little galaxy.

My only objection to the design is that there’s no visual variation between planets of the same type. You’ll encounter new and different planets that change the gameplay, but every basic moon has the exact same set of craters. It’s a lazy copy and paste job that takes you out of the world’s beauty, and it would be nice to see this adjusted for the final release.

In the audio department Gravity Ghost has the typical instrumental, post-rock style so common in artsy indie games—mostly slow and relaxing, but with a few upbeat numbers. It’s a perfectly decent soundtrack, one that will get your head bobbing without sticking with you the next day. My only issue with it lies in how it’s implanted—tracks are queued seemingly at random, and often the end of a slow number segues jarringly into a fast paced one.

That may sound like a trivial complaint, but it’s important for what a game like this is trying to convey. Music can do so much to affect a game’s mood—the classic example is Braid, where early levels and their jaunty upbeat numbers gave way to quiet, dark pieces. For Gravity Ghost to let its soundtrack be shuffled rather than match certain songs with certain levels seems like a missed opportunity to tug at players’ emotions.

FALLING BACK TO EARTH

Now that I’m done nitpicking, you’re probably wondering if the game is actually any fun. For the most part, yes—Gravity Ghost keeps its simple premise from growing old by continually introducing new elements, such as ice planets where you can’t get a solid footing and glass planets you need to shatter to unlock the star you seek.

Of particular note are the levels that introduce the animals that form the shape of each constellation. They add a bit of variety to your objectives, and also introduce the game’s most creative visuals.

Yet despite these constant little touches the fundamental concept of soaring around planets eventually gets stale—you can only fly around so many planets before the sensation becomes overly familiar. At times I managed to complete levels by randomly flying around, caught in the gravity of my own indifference or ineptitude before being thrown into my target by chance. In moments like that I worried that Gravity Ghost had fallen into the common indie trap of placing more importance on aesthetics than fun. The constant introduction of new ideas kept me pushing forward and prevented the game from tumbling into that pit, but it strikes a precarious balance.

I had been warned that Gravity Ghost wasn’t your typical objective driven game, but I still found myself progressing in a more or less linear manner through levels that shared the same simple goal. The developers also emphasize that the game has “no killing, no dying, and no way to fail,” but making a non-violent, user-friendly game isn’t as revolutionary as their pride in it seems to suggest (though that it bears advertising at all says something about gaming culture).

That doesn’t mean I have any objections to the inability to fail, mind you. Some gamers believe that a good game should challenge players to take risks by rewarding their successes and punishing their failures, while others argue that you should instead challenge gamers to explore and experiment by assuring them that they won’t encounter setbacks just because they tried to be creative. I’m sure most gamers would agree that both approaches have their place, and without turning this review into a wider discussion on game design I think the latter approach serves Gravity Ghost better—enemies or timers would only make the game’s beautiful moments frustrating.

But embracing that approach isn’t an excuse to make a game boring, and boredom is an emotion Gravity Ghost flirts with. Games that don’t challenge a gamer’s skills need to engage their mind in other ways, but once the novelty of soaring through the stars wore off I lost that sense of engagement.

Another feature the developers advertise is “feelings,” and I think that’s what they want to truly drive Gravity Ghost­. That’s an admirable but lofty goal—for a game to be an emotional journey rather than one dictated by gameplay it needs characters and a storyline with enough depth to carry the day. That doesn’t necessarily mean pages of dialogue and backstory, but it does mean finding some way for gamers to make an emotional connection to the elements of the game. But everything I encountered in Gravity Ghost, from the levels to the characters, was too simplistic to make that connection. Much like space itself, Gravity Ghost is beautiful but empty.

Gravity Ghost is by no means a bad game, but it is one that failed to live up to the expectations the developer set for me. It’s gorgeous, a shining example of the sort of unique aesthetic beauty indie developers can create when they don’t have to worry about appealing to a large audience. But it’s so slight that, much like the game’s heroine, it could have slipped away from me at any moment. With no serious gameplay or storytelling ambitions to weigh Gravity Ghost down, it’s an experience that’s pleasant but unable to create memories that won’t drift away.

Mark Hill is a Calgary based freelance writer. He contributes to Cracked, Topless Robot, TopTenz and many other websites. Check out his personal site at www.mehill.org. 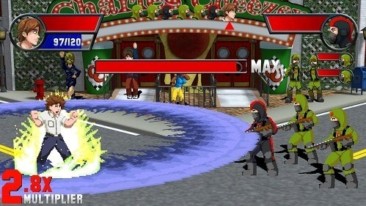 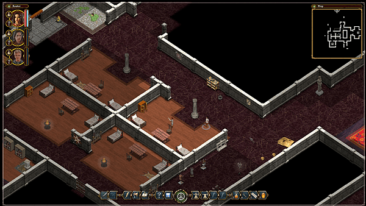