THE ATTACK PACK from ATTACK MOUNTAIN

Back in the late ’70s and early ’80s, arcade cabinets were all the rage. Dispensing a quarter into a machine to play a game has now dwindled into a nostalgic memory for many. Now more than ever, the resurgence of creating those addicting, simplistic arcade games is a growing trend within the indie game scene. THE ATTACK PACK by ATTACK MOUNTAIN evokes that arcade feel with three small, action-packed games.

In QUACK ATTACK 1985: TURBO DX, you move around the screen as a duck, collecting as many eggs as you can while simultaneously avoiding other ducks who are doing the same thing. When ducks come in contact with one another, the duck that has the most eggs hits the other and resets their egg count. The goal of the game is to get the highest score possible before dying. It’s a simple premise and easy enough to understand. Playing the game, however, proved to be a trying experience. 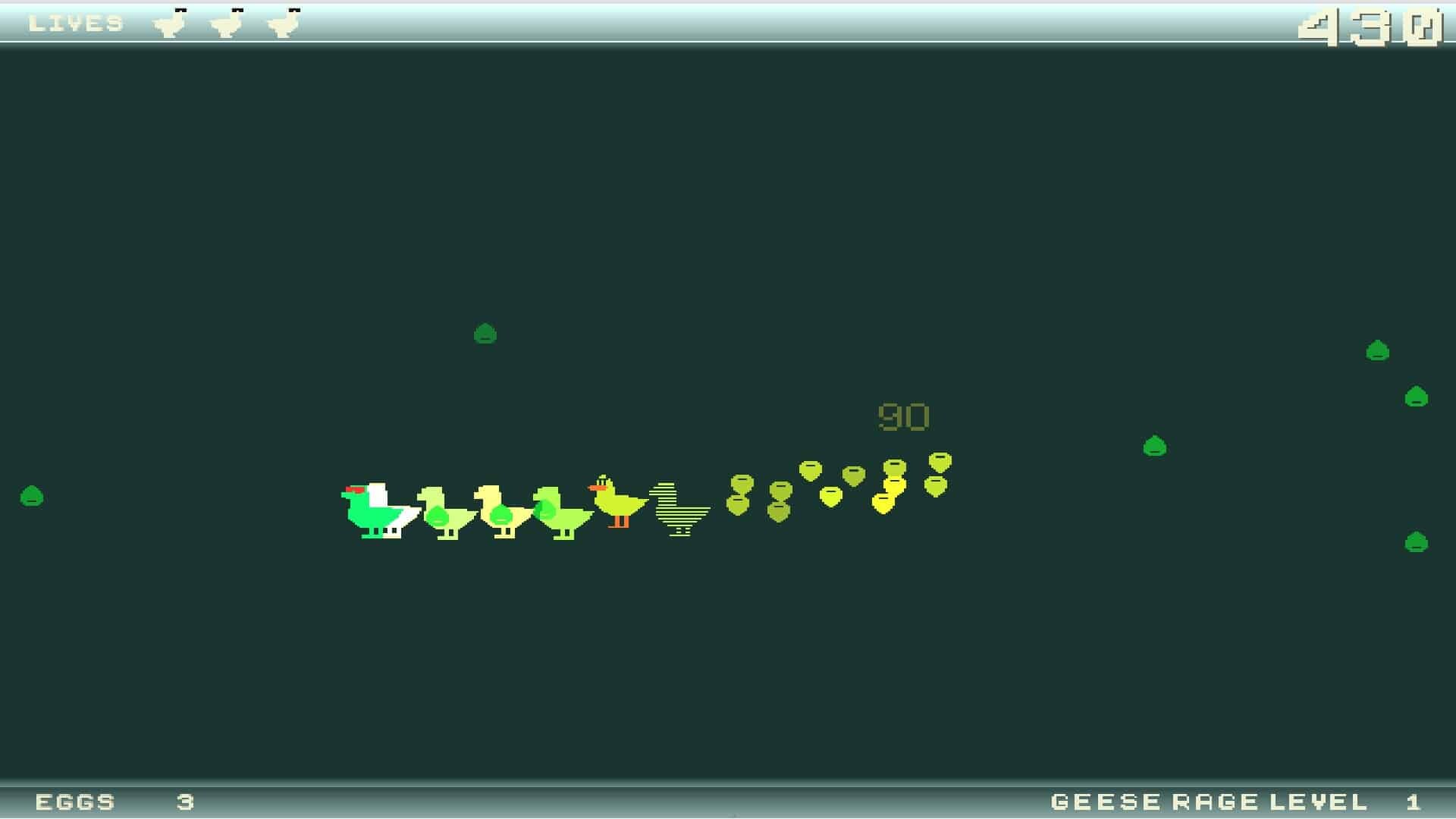 The game disorients you and moves at a blistering pace, making it needlessly difficult. The screen is constantly flashing while ducks move at an insane pace. It felt as if the game was trying to confuse you on purpose. It makes it more difficult but in a frustrating way. Since you move so fast, you constantly lose track of where you are on screen. This is further compounded by the game’s constricting controls. You are only able to move your duck using four axis of up, down, left or right. This adds even more challenge because of how small the eggs are on screen.

The visuals are purposefully basic to evoke an early arcade game vibe. And it does succeed, even featuring the sound effects you’d expect from the game’s art style. It feels like it could be an old arcade game that was lost, except for all the flashing colors on screen. I also wished there were some way to adjust graphical options, because part of the screen was cut off, but I don’t know if that was just an issue on my end.

What would you do if you were an alien and landed on earth? Probably do what the protagonist in this game does: collect humans to grow stronger. You find yourself in a large park full of humans waiting to be collected. You must maneuver and manipulate your environment to collect as many as possible.

Collecting these humans is not as easy as it sounds. Starting off, you find that you can only walk either left or right. Not only does this make it tough when humans naturally run away when they see you, it also creates a slower gameplay experience. At first, it felt like a “walking simulator,” but you soon learn that the game has a light puzzle aspect to it. 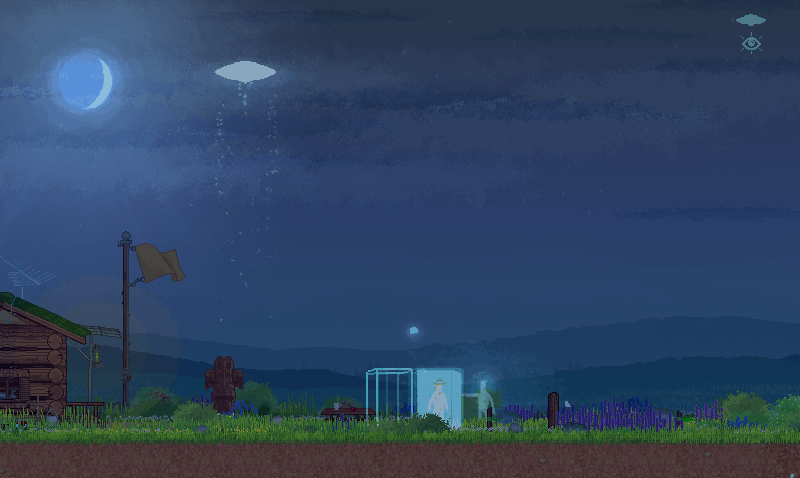 When humans run away from you, you can use useful things in your environment to catch them more easily. As an example, a human saw me and ran away, but I used my mouse pointer to click on a beehive. The bees came out and started chasing the human, which made him run back in my direction, allowing me to collect him.

The game has small instances like these, but I often found them too limiting, as they are not present most of the time. I wish that the game had more of this type of light puzzle-solving to make it more entertaining. Instead, the game relies more on your ability to reach runaway humans before they leave the screen. If you walk out of the area and come back, the humans do re-spawn, but this made the game feel tedious.

Catching humans also grants you more powers to make capturing them easier as well as allowing you to enter new areas. The concept is sound, but the gameplay isn’t as rewarding as it could have been, because the game boils down to one task which needs to be completed over and over again.

I did enjoy this game’s style, from its ’70s-inspired soundtrack, to its simplistic pixellated visuals. The game was very atmospheric and made for a somewhat relaxing experience when you weren’t desperately trying to capture humans. It uses color really well, and the environments look great. Grass moves in the wind and details like fluttering butterflies are welcome additions.

Unfortunately, this game isn’t very fun to play. Whether it was the slow pace or the fact that collecting humans felt too repetitive, it made for a largely bland jaunt. THE GREY MAN is definitely the most experimental game in this bundle – part exploration, part puzzle-solving. It has interesting ideas, but ultimately failed to create an engaging experience.

The most action-heavy game in the bundle, SOS: SPECIAL OPERATIVE STORIES has you playing as a gun-toting special operative on a mission to kill everyone in your path, Rambo-style. And I mention Rambo because the game feels a lot like an ’80s action movie, right down to the music and over-the-top action. 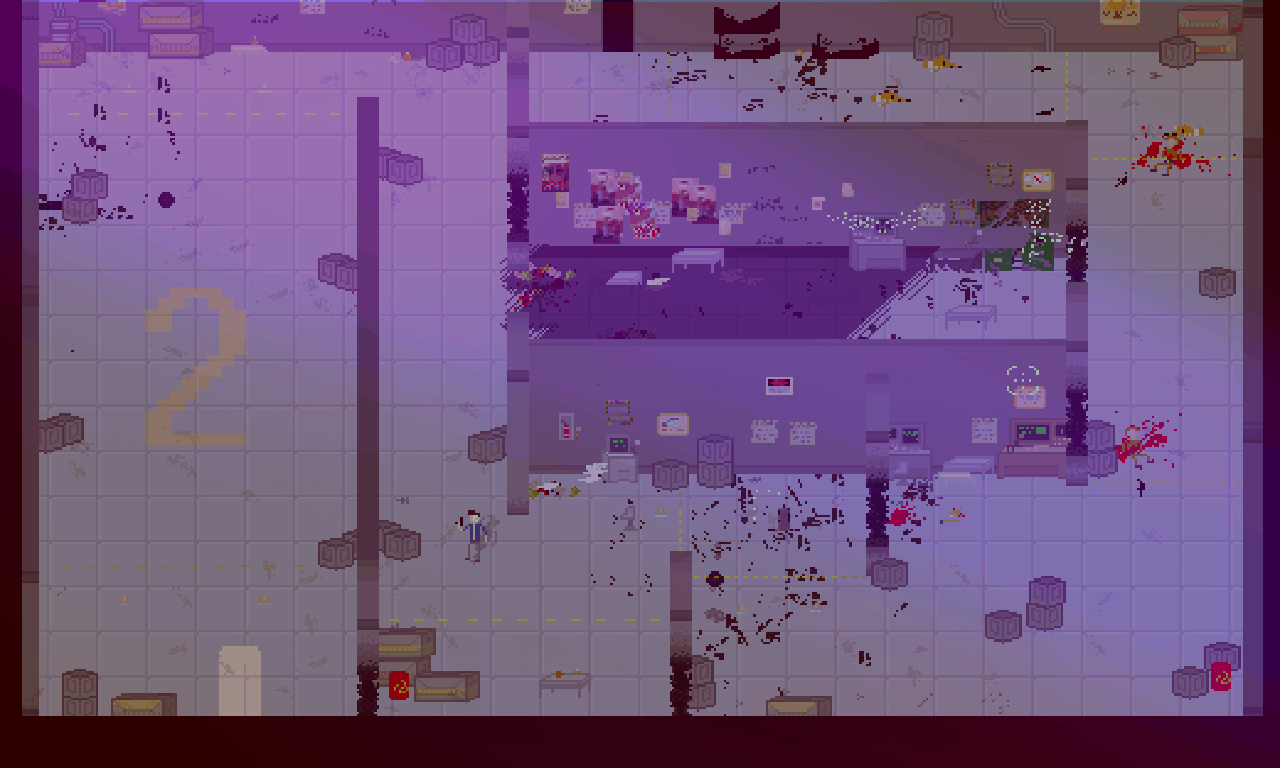 The game is easy to pick up and play and simplistic enough to make it fun. You move using the WASD keys while using the mouse to shoot. You also have the ability to dodge and throw an endless supply of grenades. Missions generally involve killing everyone in sight, then facing a boss. It did remind me at times of Smash TV. SOS: SPECIAL OPERATIVE STORIES is all about shooting everyone with only a small amount of narrative sprinkled on top, but this isn’t an issue because it’s enjoyable, especially when there are exploding barrels everywhere.

The game does have some faults which detracted from my experience. I often felt that the visuals blended into the color of my crosshair. It also doesn’t help that the crosshair is not as visually prominent as it could be. I often lost track of where it was, which screwed me up during a couple of boss fights. I also didn’t like that there were no in-game options and no ability to save your game. It leaves things feeling a little unfinished.

Ahead of the Pack?

THE ATTACK PACK has a nice blend of different titles, each offering their own gameplay experiences. I definitely enjoyed SOS: SPECIAL OPERATIVE STORIES the most because of how mindlessly fun it is. I feel like QUACK ATTACK 1985: TURBO DX was the weakest game in the bundle because of how disorienting and unwieldy it felt. Unfortunately, the bundle as whole is a mixed bag and only recommended for those looking for more old-school, cabinet-style arcade games.

THE ATTACK PACK is available on Steam.

Check out the trailer for THE ATTACK PACK below: 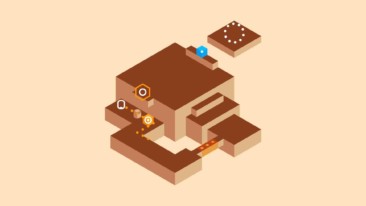 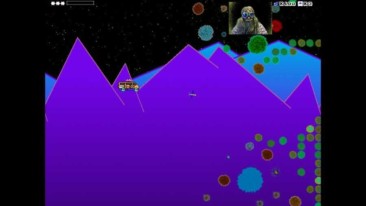