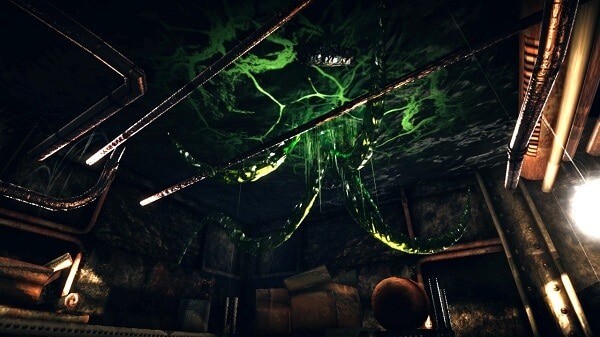 Albedo: Eyes from Outer Space – What We Think:

Albedo: Eyes from Outer Space does a great job conjuring up ’50s B-movie atmosphere, from the blips, beeps and screeching horror film strings of the opening menu to the slimy tentacled monsters you’ll encounter throughout the game. It’s too bad that the game’s illogical puzzles, clumsy controls and needlessly difficult action sequences make it hard for you to enjoy it.

The Eyes Have It

The game is set in a near future scientific research lab after a devastating and mysterious explosion. As a somewhat apathetic night watchman, it’ll be your job to try and escape the ruined building, solving puzzles, repairing broken equipment and dealing with plenty of bug-eyed monsters along the way.

The lab looks fantastic–all ruined walls and broken pipes scattered with weird glowing machinery and overtaken by slime and bits of tentacle. The monsters look even better; skittering multi-limbed arthropods, they’re topped by massive eyeballs. Imagine a giant Half Life headcrab auditioning for The Residents. It’s a perfect rendition of low-budget sci-fi horror from a bygone era. 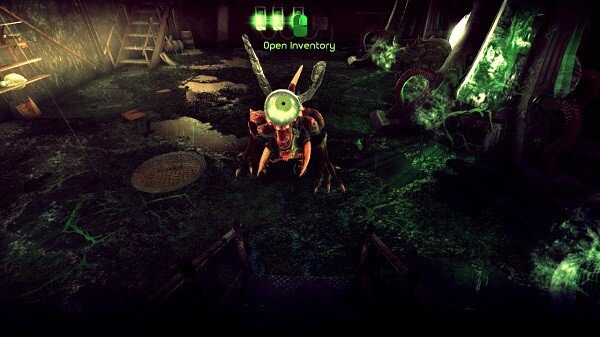 The shame is that Albedo distracts you from all the creepy sound effects and moody visuals at every turn. It’s riddled with glitches and annoyances. Some are easily fixed, like an almost dizzying level of mouse sensitivity that can be remedied in the settings menu. Others are mostly forgivable, like the main character’s narration kicking in to explain sequences that haven’t been visually triggered yet in the game.

Unfortunately, the problems don’t end there. An adventure game played from a first-person perspective, Albedo tries to cram in action sequences, none of which are particularly well-implemented (though the ability to use almost any item in your inventory, like garden shears or screwdrivers, as ad-hoc weapons is a clever touch). Some of them, like a timed underwater section, are straight-up miserable. 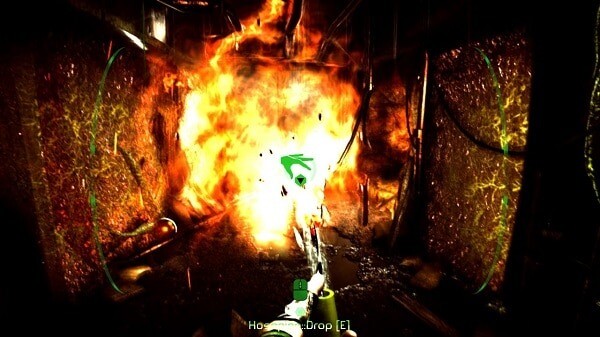 Perhaps even worse for an adventure game, a number of the puzzles are illogical and counter-intuitive. The opening sequence requires you to rig a trap for an unseen alien in order to escape a locked room, for example; once this is done, you can leave the first room, but there’s no explanation for how the door ultimately got unlocked.

The otherwise excellent design also gets in the way here, with the level of detail sometimes inadvertently turning inventory puzzles into a hidden object game as you mouse around looking trying to determine which objects are interactive and which ones are just for show. 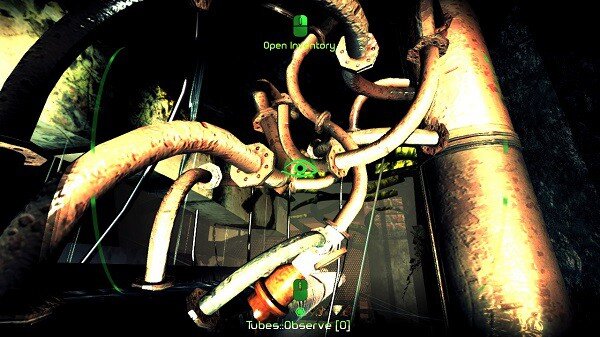 The game actually does nail some of its more abstract puzzle sequences, like lock-picking and pipe-fitting mini-games. Admittedly, these types of puzzles aren’t everyone’s cup of tea, but they’re done well here, requiring lots of patience and thought (or a glance at a walk-through, for the more impatient among us).

If Albedo focused more on that kind of thing and took a sort of Myst by way of the Midnight Movies route, it would be a lot more successful. Unfortunately, as it stands, the game jams too many gameplay styles together and doesn’t quite get any of them right. At least we’ll always have the eyeball-headed creepy crawlies.

Get Albedo: Eyes from Outer Space on Steam

Watch the trailer for Albedo: Eyes from Outer Space below: 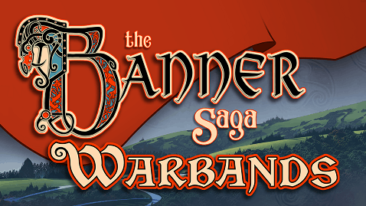 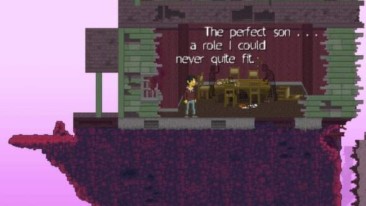 Review: Disorder – The Walk Between Hope and Despair