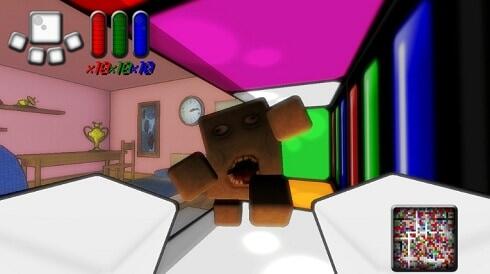 See the world from a new perspective in this innovative First Person Puzzle-Platform game that puts you in the role of Pixel, our little cubic friend. As a pixel, your life has always been confined inside a small monitor… but now you have a dream: Escape from it!! Destroy the pixels in the monitor to open your way, create new ones and exploit their color-related powers to your advantage, or activate your special abilities to overcome the hardest challenges. Either if you love mind-teasing puzzles or fast paced action, this game has what you are looking for!

A Pixel Escape, a semi-finalist in the Dream. Build. Play 2012 challenge, strives to take a 2D image and turn it into a first-person adventure. Toting several modes, the game puts you in the role of a pixel trying to free itself from the screen. The monitor makes up the world of each level, from randomly generated images to pre-made puzzle levels. Even pictures can be converted into levels for the game, providing near infinite possibilities for the different levels on offer.

What is the Dot Matrix?

The gameplay of A Pixel Escape is divided into four sections; quick play, puzzle levels, picture levels and a puzzle generator. Quick play drops you straight into a game with minimum hassle while choosing puzzle levels allows you to pick from an impressive list of levels split between beginner, intermediate and expert difficulties. Picture levels provides an array of pre-chosen images which can be used as the foundation for custom games. Finally, the puzzle generator provides the same customization tools for a game made without a pre-existing picture.

These options may seem varied but the game actually only provides two distinct game modes within all of these choices and these are Gold Mine and Escape. Gameplay takes place from a first person perspective in both cases, placing you in a flat world with the transparent screen on one side and the back of the monitor on the other. The world is populated with large block shaped pixels of different colors, with each color having a different property. In Gold Mine mode you must punch and destroy a certain number of golden blocks before the timer runs out. This task can be made easier by causing red explosive blocks to detonate and cause a cascade across the level. Most blocks can be destroyed by punching through them and you’ll spend a lot of time digging your way to find more golden blocks. A map tool makes this easier, giving perspective by showing the screen in its 2D form along with your location on it.

Escape involves you navigating a maze of unbreakable blocks in search of a crack in the screen to escape through. The mazes often have dead ends forcing you to respawn at the last checkpoint by manually selecting this option from the map. In both Gold Mine and Escape you must occasionally battle enemy pixels ranging from ghosts to zombies and fire pixels. Unfortunately this combat usually just involves punching the enemy or detonating a nearby explosive pixel.

Gold Mine is the superior of the two modes, capitalizing on the block-breaking mechanics of the game. You can also create a block of any type in this mode, opening up strategies such as creating a purple spring block to bounce higher or a red explosive block to blast through normally unbreakable blocks. There is also a sense of pace to this mode, driving the player to rush through the level destroying blocks as quickly as possible. The flipside of this, however, is that strategy tends to sit by the wayside as you simply punch your way through blocks and to victory. Escape feels somewhat limited by comparison. Without the ability to place or break blocks the game simply feels like a maze that you much navigate from the unappealing perspective of a first-person shooter. The simple enemies do little to spice up this mode and the repetitive exploration is compounded by the occasional need to respawn when you reach a dead end.

The game is visually well designed but the simple, flat worlds formed of blocks don’t combine well with the first person perspective. This is true whether you are playing on a pre-made world or a level based on a picture. By contrast, the music is vibrant and retro in equal measure, giving the game an upbeat and engaging feel.

There is plenty of content on offer in A Pixel Escape. An impressive number of pre-made levels are available and if this isn’t enough you can generate your own levels or use a picture as the foundation for new levels. Customization options are abundant and you can tailor a level to any style you choose, opening up a lot of choices for those who want to tweak things to their liking. Unfortunately, despite the impressive variety of customization options, you’ll still end up doing largely the same thing in any level-punching (or climbing over) blocks that encompass most of your view. Kunga Brothers clearly put a lot of effort into A Pixel Escape and there are some interesting ideas here that could grow into an enjoyable experience. Sadly, despite its potential and the variety of options that can be changed, A Pixel Escape can’t evade the relatively bland nature of its core gameplay. 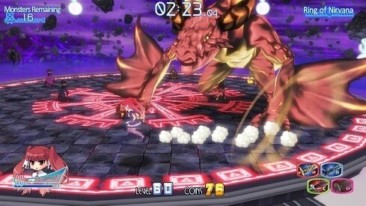 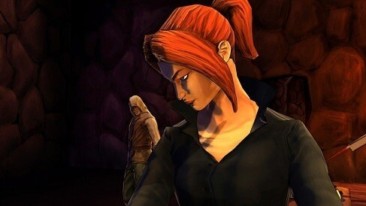