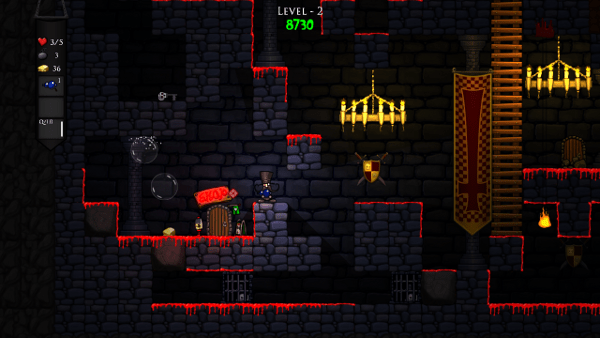 Roguelikes have become insanely popular in the indie game scene in the past couple of years. 99 Levels To Hell from Zaxis Games/B-evil feels like a mixture between two of the most popular Roguelike-likes out there: Spelunky and Edmund McMillen’s The Binding of Isaac. It has the 2D platforming aspects of Spelunky and the dual-stick shooter elements of The Binding of Isaac. It’s a fast paced Roguelike-like that emphasizes player skill and features permadeath along with randomized elements. But in a lot of ways 99 Levels To Hell still feels like a work in progress.

The game is light on narrative as you slowly discover snippets about the world and history in the form of audio diaries. The diaries are read aloud, telling a story about two brothers. Unfortunately it’s not very compelling and feels sort of tacked-on. It’s obvious that the game’s main focus is on its gameplay, and hey there’s nothing wrong with that, if the gameplay delivers.

May Your Soul Guide You

The controller method take a bit of getting used since the button layouts are unconventional. They are responsive however, and work well once your brain grabs hold. What the game eventually boils down to is jumping around, stopping to shoot monsters, and then jumping around some more. It gets pretty challenging since killing monsters requires precision and your complete attention. No watching Netflix at the same time! 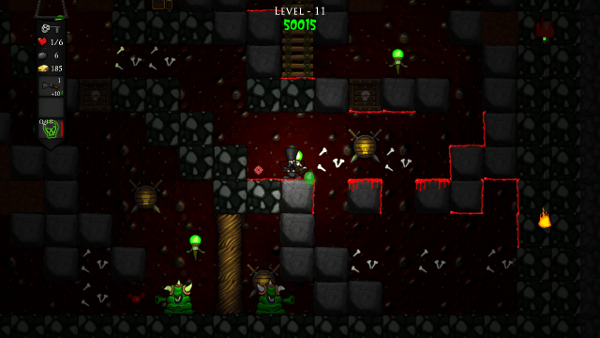 The prize is generally centered around a high-score system; killing monsters increases your score amount, and killing them in succession gives you a finite score multiplier. Once you die, you can see your final score and it’s connected to online leaderboards. The primary objective for each level is to find the key that unlocks a door, and then finding said door which leads to the next level.

Every 10th level you will reliably encounter a boss. After you kill a boss, you gain a checkpoint. So if you die, you can start a new game on the 11th level or the 21 level and so on. Optional items can be found within each level: Gold helps you buy weapon upgrades, Bombs can be used to destroy certain blocks, Hearts are used to refill lost health, and Special Abilities that give you a permanent offensive or defensive power to help you through the game.

In every level – excluding boss battle levels – you have a certain amount of time before powerful ghost enemies come out and attack you. Much like Spelunky, 99 Levels To Hell requires that you not overstay your welcome in any given level; it creates a certain pace for you to complete each level and it does a good job creating tense moments.

The game is made up of 10 different dungeons, all comprising 10 levels in the style of its dungeon theme. The levels never feel varied enough (besides obvious texture swaps on repeated map layout).

The Devil’s in the Details

The game boasts “100 levels that spawn at random” but maps just aren’t ever all that interesting, or fun to traverse, which is where Binding of Isaac excelled. Beyond environmental traps, levels will also sometimes contain elevators or umbrellas that give you the ability to skip levels and progress faster. Even with these elements in place, levels don’t do enough to keep the gameplay interesting. The monotony starts to set in quickly as you’re basically doing the same thing over and over again ad nauseum. 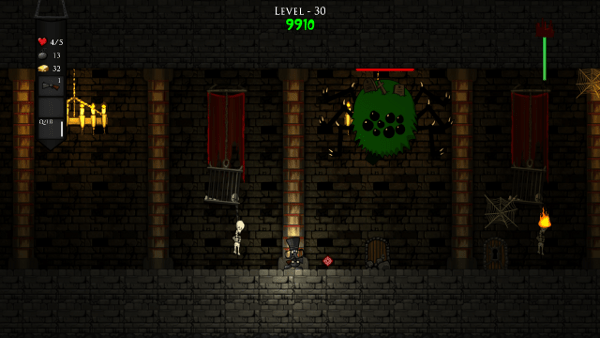 Although the maps may look similar, the game tries to mix things up by adding randomized items. Different weapons or special abilities make up most of these and are imperative to making your playthrough easier. The game relies on these items far too much. Success in this game is garnered by getting lucky and finding a shop that contains weapon upgrades or a special ability. If you don’t get lucky, bosses become extremely difficult since your starting character layout is so underpowered.

You start off with a very short range shotgun and no special ability. This adds to the game’s difficulty substantially, especially if you were to start a new game from a check-pointed higher level wherein enemies are tougher and harder to kill. It often feels unbalanced when compared to other Roguelike-likes out there. You may go through all 9 levels of a dungeon and find zero weapon upgrades, no abilities, making the boss fight of that dungeon too frustratingly unfair. 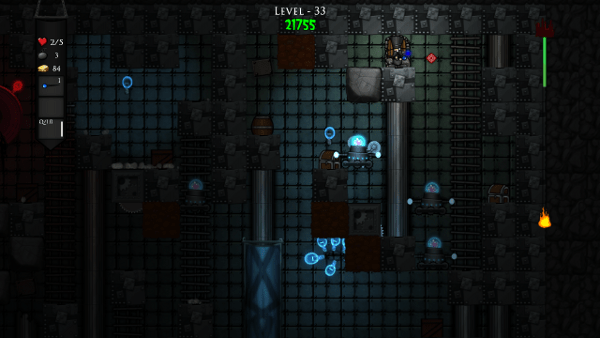 Visually the game is pretty bland but the lighting effects look nice. I had no issues with the game’s art style overall even though I felt it could have been more appealing. The music and sound effects support the game’s tone nicely and I had no issues there.

99 Levels To Hell is a decent 2D platforming title with Roguelike elements. Judging by the discussion boards on Steam, it seems as if the developers are listening and plan on adding future updates to improve upon the game. The game at the moment feels like it’s in a state of beta testing, (as do a lot of indie games nowadays, particularly glaring given the euphemestic “Early Access” term now applied to them when they are in fact for sale on said marketplace).

Ultimately this title is, at present, too repetitive and unbalanced to recommend.

Get 99 Levels To Hell on Steam

Get 99 Levels To Hell at Desura 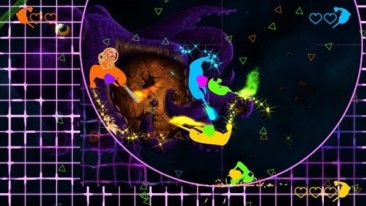