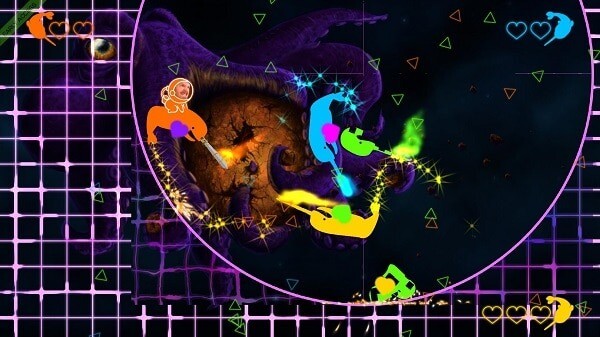 Starwhal: Just The Tip – What We Think

Narwhals are highly underrated creatures. They’re essentially whales, but each one sports a ginormous stabby tusk at the front of its face. What’s not to love?

In Starwhal: Just the Tip – successfully Kickstarted for double its goal by indie developers Breakfall Games (who also brought you Marvin’s Mittens) – these pointy undersea mammals take to their rightful place among stars to square off in neon colored battles to the death. It may be the greatest local party-game I’ve played, at least in a long time.

Note: This review is based on the current Beta available on Steam. 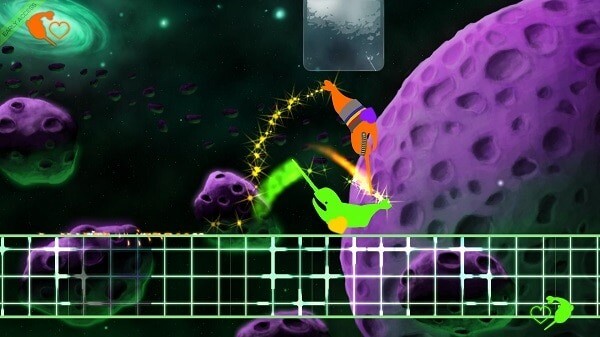 As a narwhal, you have a pointy end to attack with, and a big pulsing heart to protect. To win, you must ram your horn into the hearts of your foes, but this may mean exposing your own delicate organ. Each strike takes away one heart point, and a contestant is eliminated when his last point is stolen. Whether you take on three friends, or a combination of friends and bots, SJTP is a wild ride.

The control scheme is extremely basic, and it makes for some intentionally difficult handling. One button controls thrust, and you can aim the point of your narwhal up or down to change the direction in which you swim. That’s it. The ‘whals get going pretty fast, and having four of them all flipping about wildly whilst trying to gore anyone near enough his point makes for a nail-biting, hilarious spectacle that had me laughing out loud, regardless of my rank at the end of the game. 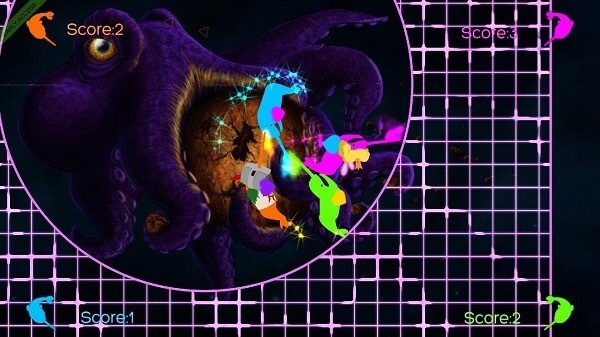 Close calls and near misses are punctuated by a brief period of slow-motion. Should you be involved in this near clash, this provides an opportunity to pull off some quick moves to either make the strike or avoid taking one. When playing with four players, these periods happen frequently. It ramps up the overall intensity of the experience.

Visually, the models for the mammals themselves are very simple; without personal touches, each one is a simple base color with the heart appearing as a different hue. Levels are comprised of bright 90’s neon tones, and see through blocks that allow players to see the gorgeously designed planets the ‘whals are fighting near. Sparks fly from the tusk of each Starwhal as they take flight, and watching a felled opponent scatter unceremoniously into 3 large hunks is as satisfying as it is funny.

Personalizing your ‘whal is almost as much fun as playing the game. You can select a different head and body type, and there are several possible combinations. There are nods to video game characters and sci-fi icons alike (as a die hard fan of Dark Souls, I very much appreciated the Sun Bro getup). The devs have also stated that new customization options are incoming with the next update, which goes live March 10th. 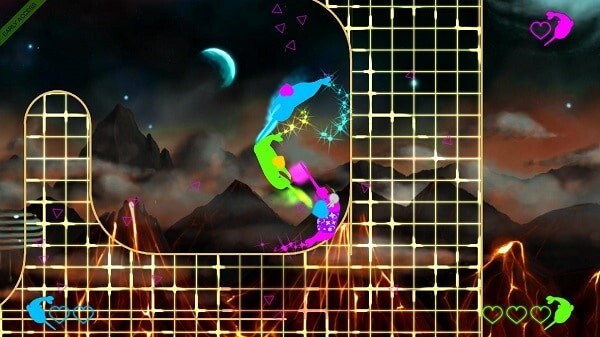 There are four modes of play, though only two are available in early access. Classic Mode allows you set the amount of heart points each player has, with the winner being the last man standing. In Score Attack, you set the number of points that determines victory, and each player tries to be the first to amass that number of hits. Information on the forthcoming Zones and Heart Throb modes can be found on the Steam forum page.

I managed to play several rounds against 3 bots (The AI opponents make for a decent challenge) and played a handful of rounds against a mix of human opponents and bots. Always keep the screen packed with the full 4 contestants for contests most frantic. Should you manage to get 4 players together around your machine, settle in; this is party-game bliss, and it will likely be a while before everyone comes up for air.

Get STARWHAL: Just the Tip on Steam 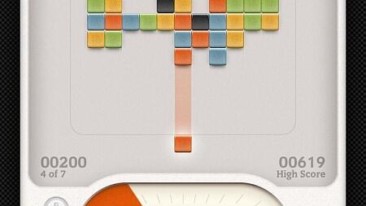 Review: Mosaique for iOS and Android 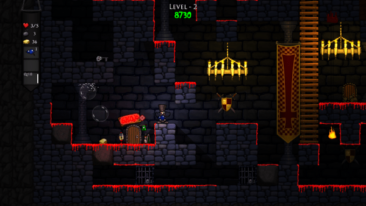