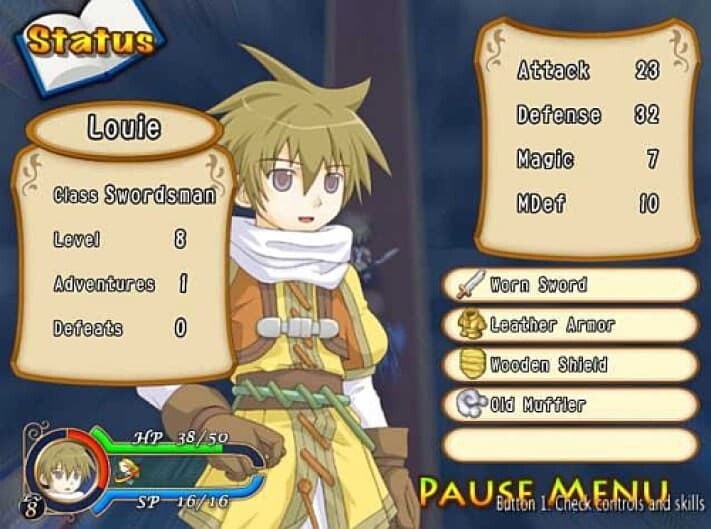 Recettear from EasyGameStation and Carpe Fulgur

No doubt, Carpe Fulgur had some interesting choices when deciding on their first title to import from Japan, but I think they hit the nail on the head when they chose EasyGameStation’s Recettear: An Item Shop’s Tale.

Old school Zelda-style hack and slash dungeon crawling combined with a casual store-keeping game you might catch your mom playing. Sound like an unlikely combination?

The key controls are not intuitive and can be totally frustrating at first for those not already familiar with the arrow keys + zxc standard and there is scarce little help in this regard from the otherwise extensive opening tutorial. And there’s a LOT of exposition before any action happens. So does it pay off?

We’ll look at the two elements individually, then tie them together (which seems like what the developers did anyway).

You and Your Item Shop

So you’re a poor girl who’s father has recently died, leaving you all alone in the world. But, kind man that he was, he’s left you a wonderful gift. CRUSHING DEBT! Now the fairy mafia is going to come and take your home and bust your kneecaps if you don’t start working for them. OK, I’m overstating things a little, but things are most definitely bad.

This part of the game plays very much like a number of other store management games out there. You wander through the larger shops in town for interesting buys, then sell them at you’re place at a mark-up. Strategy involves deciding on what types of items you want to sell (weapons, armor, food, etc.) how prominently you want to display items, and haggling over price with customers. Depending on local need, certain types of items will go up and down in price and either make your day, or break the bank.

While buying things from local stores is a good way to keep up stock, the real money is in looting dungeons. Hey, let’s face it, you don’t have to pay for items you pick off a corpse, do you? But little girls and fairy accountants aren’t exactly cut out for dungeon work, so it’s time to find some individuals desperate enough to do the dirty work for you.

Hitting the dungeons is interesting. While you are initially only introduced to a warrior to partner up with, you will find thieves, mages, and others willing to risk their lives for a pay-check. While the playfield in a dungeon is a low polygon 3D affair, characters and monsters are wonderfully hand drawn. Combat is mostly single button attack and avoid in real-time. Special moves exist, but aren’t really necessary. There are typically bosses every 5th level which, while interesting, aren’t often difficult to defeat. Death is well measured in Recettear.

While you can’t really die, when your partners health hits zero you must teleport home without all but one of the items you collected. This doesn’t sound too bad, but consider that in Recettear, like in life, time is money. You spent a good part of a day not doing anything and you’re next payment to your creditors wont wait.

The Ties That Bind

Story and character are both the the thing that makes the shop/dungeon dynamic work and what inevitably elevates Recettear: An Item Shop’s Tale to a game worth playing. Unfortunately, it may also be the place with the most room for improvement.

First, kudos have to be given to the art department. All the anime style characters are wonderfully drawn, but it would have been nice if they were a little more animate. Even just mouth movement when they talk would have been an improvement. It could be considered a style choice though, harkening back to good old days when adding such simple touches was not so easy. There’s a lot of talking in Recettear, and while I enjoyed the fact that they kept the original Japanese dialogue, the shear amount of text I needed to read became daunting. This isn’t helped by the fact that an extensive tutorial process may be a little too extensive. The fairy Tear will go over an added game element with you, then practice it with you, then often discuss it again, and probably have a customer come in and try it “for real” with you. It just becomes a bit much. Thankfully, once you’ve played the game once, you will be comfortable enough to Esc your way through all of these conversations.

The interesting characters you meet are probably a great part of the game, but are also a lost opportunity. You meet a spoiled brat that decides she’s going to use daddy’s vast business empire to put you out of business, then just sort of fades into the background.

The young warrior could have been used as a light romantic interest. The motivations of some of the other characters could have been a little more fleshed out. In the end though, I guess I had enough text to read as it was.

The one advantage Recettear has over most RPGs is that you can play it in short stints. Fire it up for half an hour and just spend a day selling items in the shop, or maybe head into the dungeons  for a quick five levels. Just be careful, because it’s also one of those games where you’ll find yourself promising to play for “just another half an hour” over and over again until the evening is gone.

Recettear: An Item Shop’s Tale can be purchased from Gamersgate, Impulse and Steam.