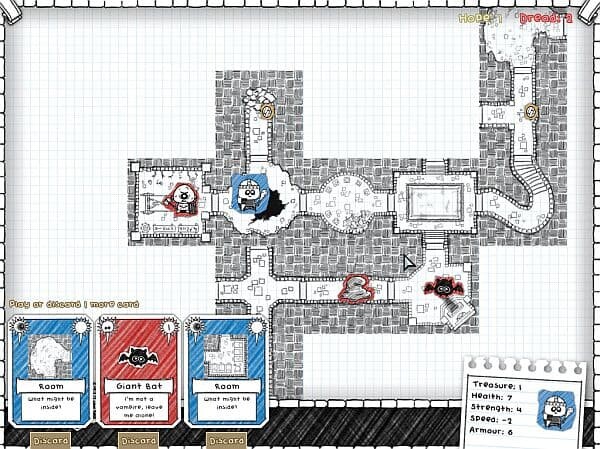 Guild of Dungeoneering – Alpha Build – What We Think:

Guild of Dungeoneering is essentially a solo variant of Munchkin that does little to mask the comparison. Like the card-based tabletop game, the latest from Gambrinous is filled with loving references to various D&D tropes, taking the meta-humor a step further with a demon that refers to itself as a Wandering Monster.

As a proof-of-concept, the alpha is decent enough. You start each turn with a hand of five cards, of which you must play or discard three. You use those cards to design a dungeon and fill it with loot and monsters. The humor is (mostly) on-point and the hand drawn graph-paper art style exudes a homespun charm.

Hello? Is There Anybody In There?

There are, however, several red flags that warrant caution. Some are more severe than others. Guild of Dungeoneering is sorely lacking in monster and item variety, but the engine is in place and I would expect much more content prior to launch.

The poor balance is a much greater concern, largely because it reflects an incomplete understanding of the appeal of tabletop gaming. Munchkin remains fun even after the puns wear thin because the experience owes as much to the wit and aggravation of other players as it does to boxed product. You can never predict how opponents will use the cards they have.

Guild of Dungeoneering offers only coded solitude, which minimizes the potential for quirky spontaneity. The alpha attempts to restore suspense with random character movement – an AI determines each move – and even touts the absence of player control as a primary feature.

You get to build the map, but you don’t get to explore it.

The gimmick is supposed to inform the humor, but the setup is far more frustrating than funny. The randomness is programmed and therefore predictable. You will die, but you’ll know why and there’s nothing you can do about it.

It serves to remind you why developers don’t ordinarily kneecap the user. Without agency, you’re not playing a game. You’re just an overseer watching from above while a random number generator kicks you in the teeth and tells you to laugh.

Rubber Ducky, You’re the One

Your reward for putting up with the abuse is a punchline that’s worth a chuckle once and monotonous thereafter. The AI encourages players to disengage, and the referential humor isn’t enough to make up for the mechanical shortcomings. Once you’ve defeated one Rubber Ducky, there’s not much novelty in battling another. 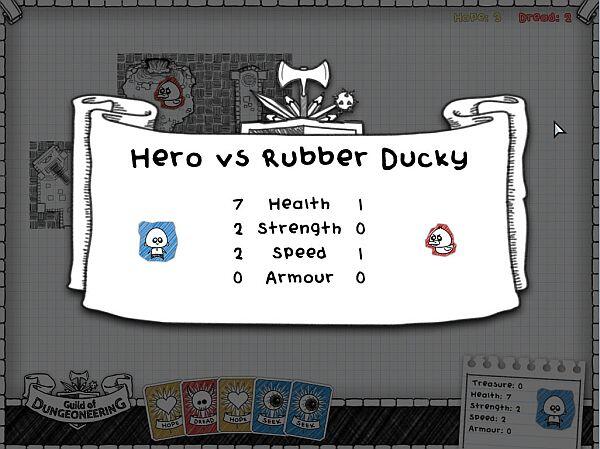 Guild of Dungeoneering assumes that you’ll want to craft a sprawling dungeon despite the fact that there is no incentive to do so. If anything, the AI ensures that the opposite is true. The more concise the dungeon, the more likely it is that the character will go where you want him to go, and the more reliably he’ll encounter the treasure and monsters you place for him.

Skill of the Draw

The result is an overly simple game that can be strategically mastered in fifteen minutes. I built a tunnel – a straight line that never branched or forked – and completely eliminated dramatic tension. Any leftover difficulty relies on luck of the draw. You’re powerless if you the game coughs up the wrong monsters and items. It’s literally impossible to die if you draw the right ones.

Playthroughs eventually feel more like Madden simulations than interactive adventures, except the game continues indefinitely if boredom doesn’t set in first. There is a boss that shows up after you’ve wasted enough time, but he moves slowly and it’s easy to stay out of his way if you’re careful.

The Quest for the Sake of Questing

The game ultimately struggles with motivation, offering ‘get the loots’ as the only meaningful gameplay objective. And while you could pursue a high score, the plodding pace fails to provide the immediate feedback that makes for a satisfying rush. Guild of Dungeoneering needs something – whether that’s a deeper story or some kind of mission structure – to anchor the experience, preferably one that rewards player skill and creativity rather than chance.

Guild of Dungeoneering is still in alpha and the basics – combat, aesthetic, etc. – are worthwhile, so the game has potential. There are simply too many unanswered questions, and it’s unclear how the developers plan to answer. People won’t play a game just because it exists. Without a mechanical hook, Guild of Dungeoneering is an opening act masquerading as a headliner.

Guild of Dungeoneering on Steam Greenlight 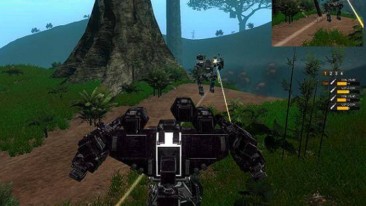