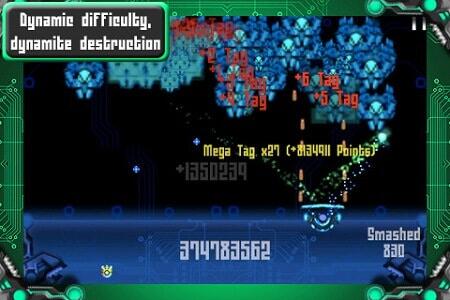 Drag Tag Smash is the fast paced game that is very simple; drag the sphere, to tag the invaders, to smash them to smithereens.

If you are in possession of an iPod, iPad or iPhone, stop whatever you are doing and download Drag Tag Smash. Go! NOW!

It’s not often that I get to play a game that gets so much right and lays it out in the first five minutes of play. Yet, from SmashMouth Games comes Drag Tag Smash, a brilliant merging of Arkanoid, Space Invaders, and borrowing bits and pieces from any number of addictive music and puzzle games that have been released in the last five years. It also slathers on a thick layer of intense electronic music.

By double tapping the screen, the ship will launch a probe connected that is tethered with an energy beam. It travels along the trajectory it launches, and is used to tag enemies. Once it has done so, if nothing gets in its way, it travels back to the ship, where a successful connection will result in the ball being launched back at the waves of enemy craft. Moving the ship back and forth requires dragging it via the touch screen, and missing contact with the probe means losing whatever chain was amassed. Every few seconds, the Smash wave emits, eliminating all enemies that have been tagged. It starts at a manageable pace, but there’s no time afforded to get cozy, as the screen will be constantly littered with invaders regardless of how many are destroyed.

Smile and Wave After Wave

The chaining system pushes this title over-the-top, and the best part of the game; if you can slip your shot up the alleyway to the left or right of the swarm and drag it overhead, it’s possible to keep the probe in the air for long periods of time, and tagging multiple enemies in the process. All the while, new enemies drift in to replace their tagged brethern, and with luck and skill, they will be tagged themselves. Points will be racked up when the Smash wave takes out the tagged foes, and for every foe that is hit before the probe comes back into contact with your ship, the score multiplier goes up by one. Chain a few hundred enemies together, and watch the number of points skyrocket.

Keep an eye out for falling bonus icons that will add increased offensive abilities, such as lasers and spread shots. Get enough power boosts, and you sweep back and forth clearing out enemies while you keep the ball in the air. The chains rack up even faster, there are less enemy projectiles to dodge and as a result, the scores generated are ridiculously high (I had to count the number of place values in my score to determine how high it actually was…I’m just not used to looking at scores that large). After a few attempts, I was racking up scores in the billions, and I’ve no doubt that trillions can be reached with some diligent projectile dodging.

Take too many hits, and its game over, but successfully completing a large chain will help to regain a bit power to the ship’s shields. Larger chains get tougher to pull off as the game progresses. Not only do the drones fire volleys of projectiles more often, but eventually, enemy drones will park themselves right above the ship. This makes their shots harder to dodge, and deflecting off them makes your shots harder to control thanks to the greatly hobbled reaction time. Still, a blaster icon of some sort can quickly level the playing field for those quick enough to pick one up.

I can’t stress this enough: The GAME. COSTS. A BUCK. For a game this wildly engaging and entertaining, grab this game now before the developers change their minds. Hands down, one of the best experiences I’ve had with an iPhone game.

Drag Tag Smash is available at the App Store for roughly USD $1.00

CreaVures: Turn On Your Heart Light – An Indie Game Review