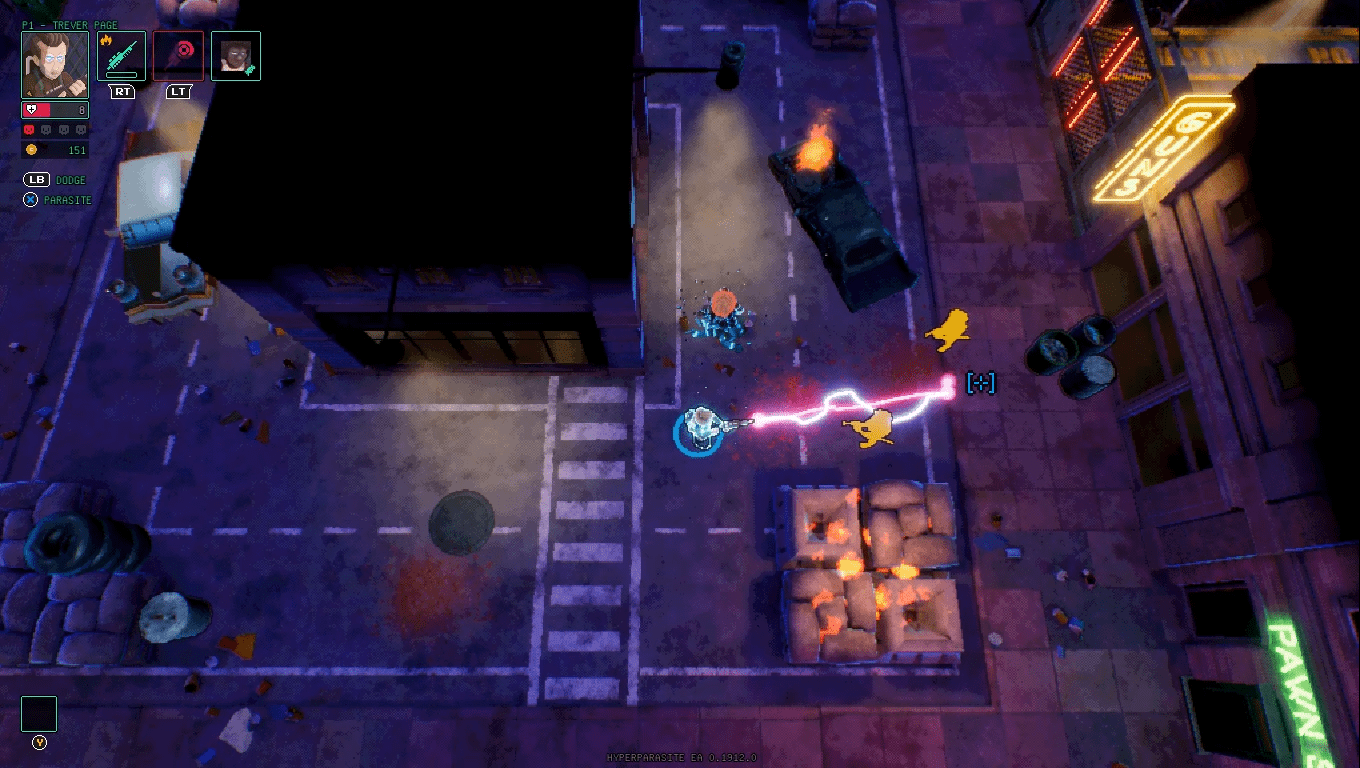 In HyperParasite by Troglobytes Games, you play as a parasite that’s being hunted by the world. This means that you must survive against literally everyone. Everyday people like a cop, basketball player, firefighter, wrestler, and even a karate teacher are now your enemies.

So the best thing to do as a parasite is to find a human host. 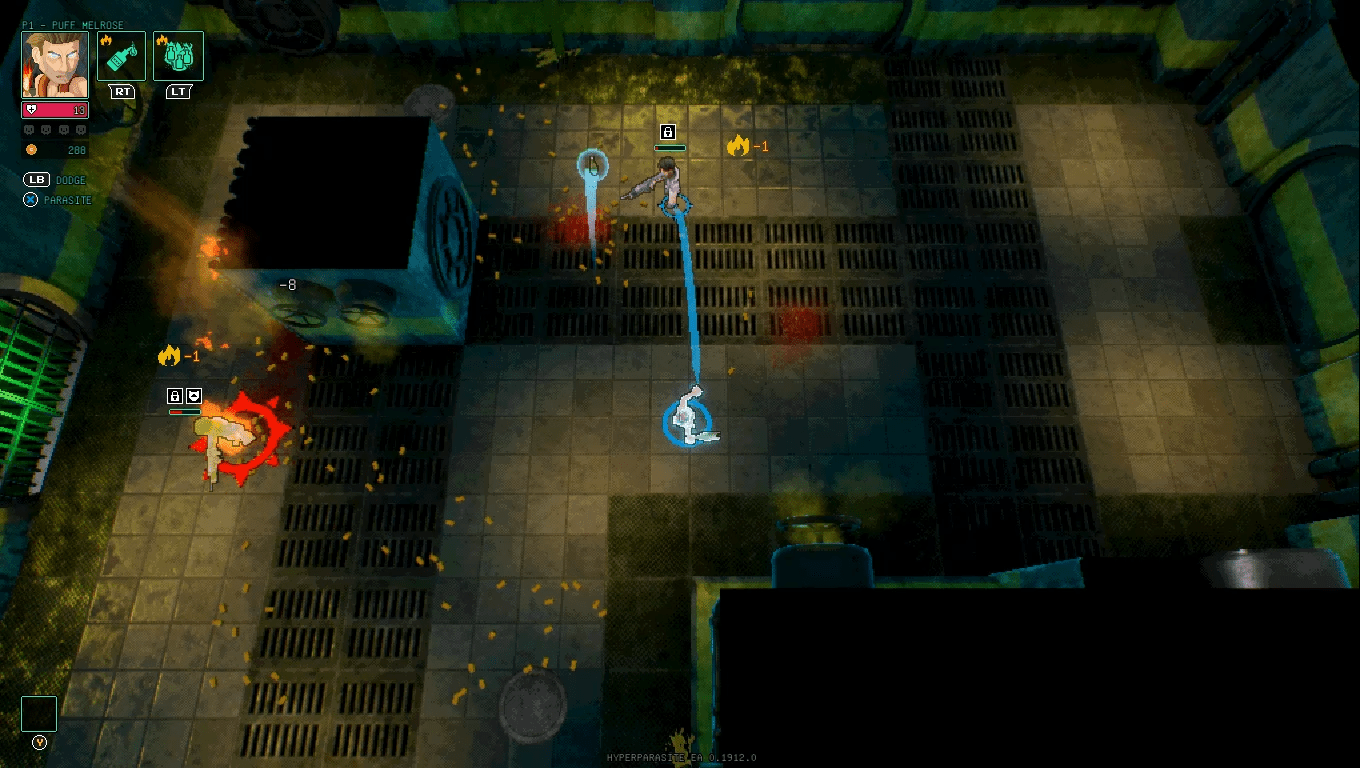 The Host with the Most

So you’ll be doing your best twin stick-shooting while you dodge bullets and charge melee characters. In addition, the game throws bosses and mini-bosses at you for added challenge.

Maps are procedurally generated and offer enough room to fight back effectively. There are environmental objects to destroy, like exploding barrels and other traps.

Coins that can be found around the map can be used to buy items or passive stat bonuses. There are also upgrades that can be acquired and take effect until your run is over.

If you’ve played a Roguelite like Nuclear Throne, you’ll know what to expect when it comes to map layouts: nothing too fancy or groundbreaking when it comes to level design, but a functionally sound collection of square-shaped rooms. There are also five different areas that change up the scenery and enemies.

Overall I didn’t have an issue with maps themselves and I appreciated that they weren’t too large.

Parasite in a Scary Fight

Combat overall can feel satisfying depending on what character you use. Some characters that are just straight-up not fun to play; there’s some trial and error involved in figuring out the best from the rest.

Overall, I found that since a lot of characters are melee-based, projectile-firing enemies like the Ghost Hunter or the Drug Lord were more fun to play. Most melee characters, on the other hand, can be easily surrounded since many of their attacks are not fast enough.

All of the enemy characters have their own feel, weapons and stats. This is where the combat variability comes into play. Each character has a special attack that runs on a recharging cool-down. These attacks are generally more powerful. This does a good job of differentiating the characters more.

Overall, there is a nicely eclectic mix of characters from a newspaper-chucking Papergirl to the spiked club-swinging, Mad Max-inspired Diesel Punk. It’s worth noting that every character can be controlled if you’ve unlocked them. 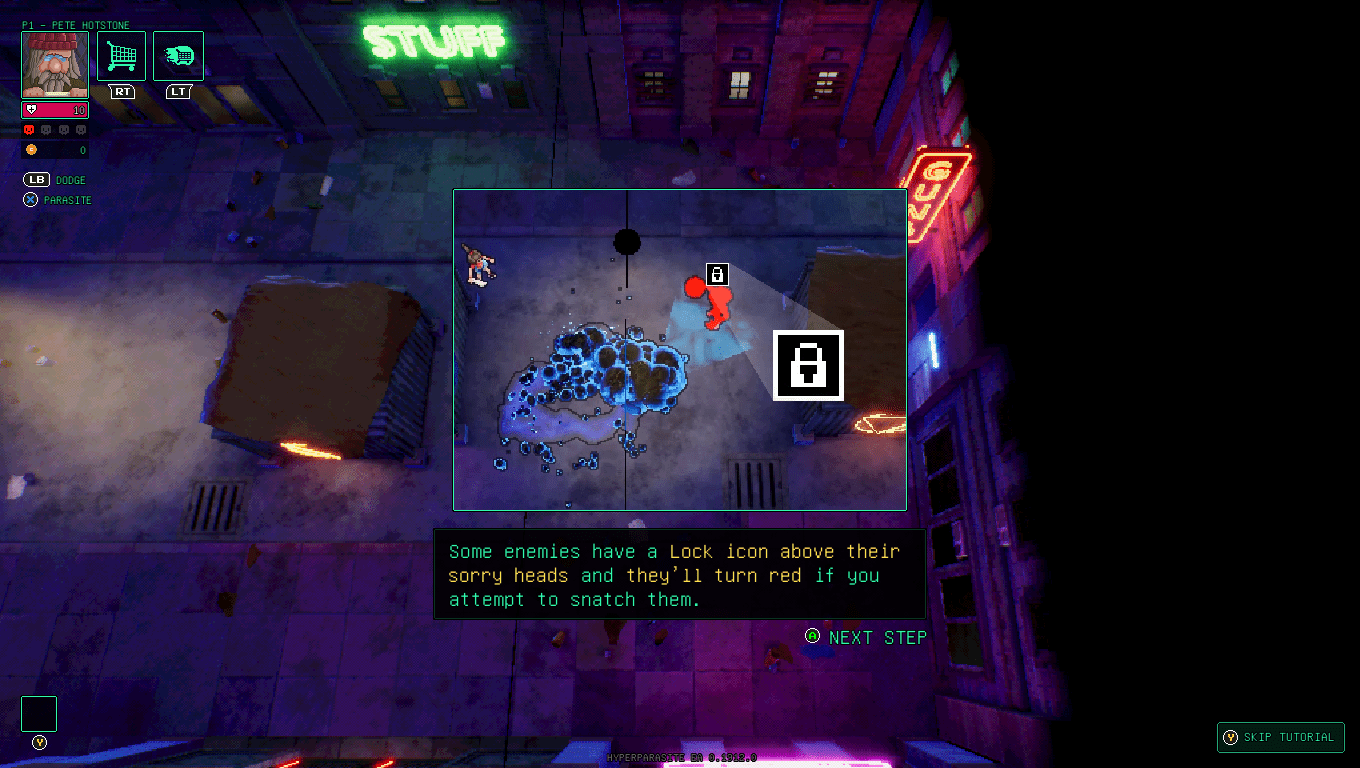 The Parasite’s Mission Is Transmission

I felt like this unlocking mechanic was less fun or rewarding than I would have liked. It felt like a grind to unlock characters instead of just playing as whoever I wanted. It makes entering new areas in the game feel especially arduous, since each area has a unique set of enemies to unlock.

There are bosses and mini-bosses you encounter throughout areas. One mini-boss I encountered in the first area was a boxer and there is a move he does where he regenerates health. I was killed during the fight so naturally, the game spawned other enemies for me to inhabit.

Unfortunately, since I had just started the game, not a lot of characters were unlocked, so I couldn’t take over the characters the game was spawning. It was nearly impossible to kill him because of his regenerating health and my inability to effectively attack him with other characters.

This also becomes an issue when entering a new area for the first couple of times when no enemy is unlocked, leading to frustrating moments.

Paradoxically, Parasitism Is a Lot of Work

The health re-spawning issue wasn’t that big of a deal, because I could eventually grind and kill him when I was properly more powerful. But this overly grind-y aspect of Rogue-lite games can turn some people off.

If you’ve played something like Enter the Gungeon, you know to expect grinding as a natural form of progression.

But the most successful Rogue-lite games have a nice balance of grind. Too much grind can become frustrating. I was definitely frustrated in this game a number of times because I could see the fun parts of the game, but they were locked behind too much grind.

At the end of the day, I feel like the mechanic of unlocking characters just gets in the way of fun.

A typical run would involve me going through the map, using all the coins I picked up and putting them towards unlocking a better character. Dying at the boss and doing that over again. Thankfully the coins you spend to unlock characters carry over to your future play-throughs. I repeated this so many times, because area bosses are just too difficult with weaker characters. 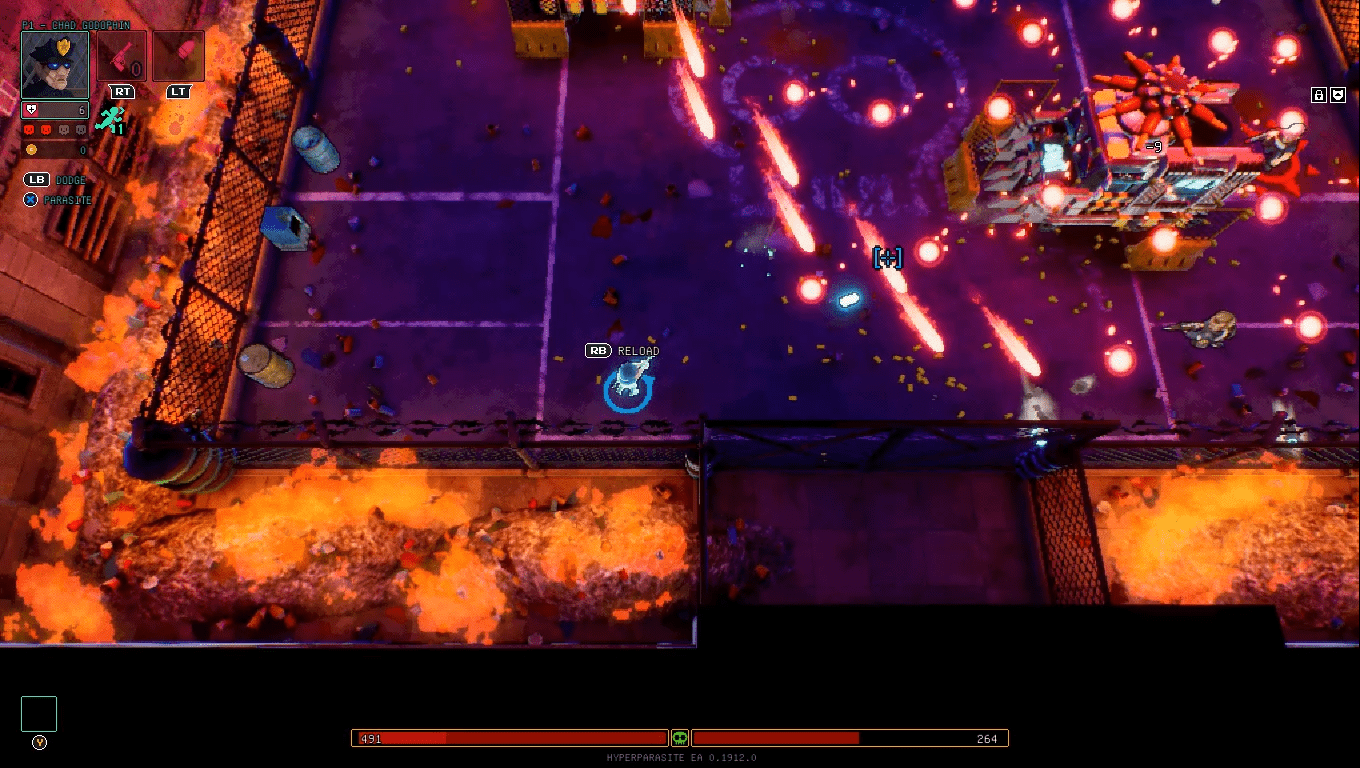 But the great thing is that in this era of gaming, these balancing issues can be easily fixed with patches. So my issues with HyperParasite may not be relevant in the future. It all depends, though; I know that this kind of grind is an essential part of many popular Rogue-lite games, so my complaints may just be what many fans are looking for (or at least things they don’t mind).

Stylistically this game is inspired by ’80s depictions of a stylized future. It implements neon lights on gritty buildings in the Downtown Area, and the concrete ground tiles are properly filthy and dimly lit in the Industrial Area.

There is a nice level of detail, making objects look like they have this retro VHS fuzzy filter. It looks great and captures a particular mood perfectly.

I feel that HyperParasite could use a bit more balancing. Its core gameplay is solid, and it can be fun depending on the character.

I found it to be too grind-focused when it came to playing as other characters, but I know that when it comes to Rogue-lites, the term “grind” can be subjective.

Regardless, I still think there is enough here to recommend to those looking for a top-down shooter with a lot of combat variety and a plethora of playable characters.

Watch the official trailer for HyperParasite below: 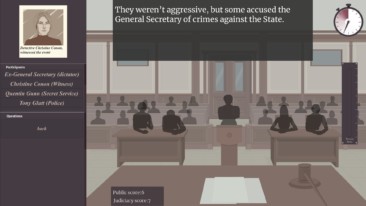 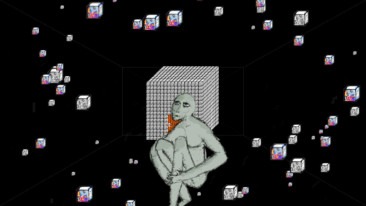