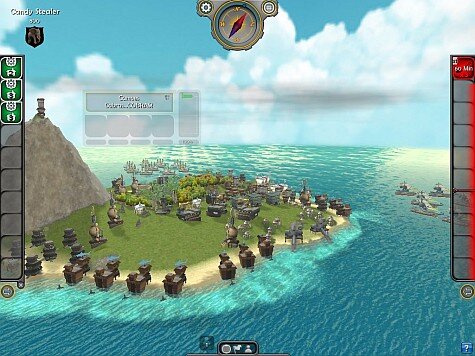 Set in a watery world where the inhabitants fight for the land and resources that remain above sea-level.

Picaroon is a Freemium RTS with some MMO elements (or what the devs call an MMORTS); it takes place in a persistent world where you compete against potentially dozens of other live opponents, and you control it like an RTS. Your day begins on your very own, barren island with the few ships in your possession. You are required to build farms, foresters, fishing huts and embassies. As expected, these buildings help you acquire and develop resources: people, food, wood, ore and stone that will help you build armies in order to ward off and/or vanquish your foes. Most buildings take a good five to ten minutes to build, if not more, so the game plays over a course of days instead of minutes or hours.

The game also features an achievement and quest system that allows you to use “specials.” These specials are used to acquire more resources for your island, speed up build times, attack other islands, speed up navy movement times and several other abilities that generally make life a little easier. Specials can also be purchased with doubloons, the virtual currency you can purchase real money.

Like any Freemium title, the game is technically free to play, but this is like saying living is free; as most of your competitors will be dishing out money to win a game, and thus to actually pull a win you will more than likely have to dump some money into it.

To lessen the impact of specials, there is a ‘specials power’ cap that won’t allow you to spam specials. Each special has a certain amount of power points that count up towards this cap. Once you pass it you can’t cast another special. UNLESS, that’s right, unless you pay for another special that will double your cap or, alternatively, you can pay for the special that allows you to zero out your current special power. Whatever way you want to spin it – you will pay more to play more.

The main goal in Picaroon is to build up a naval army to attack other islands. Getting to these islands can take days. All for about 10 minutes of fighting. Although most ships can only attack an island by barraging it in a random pattern, airships can be built to attack specific buildings. Early on you are granted three days’ immunity so you have time to build up your stores and militia. Of course attacking any other player’s islands will strip you of this protection, as well gaining more than three islands total. This helps keep the protection from being abusive. Additionally, your last island can’t be lost so you are always protected against having to start from scratch.

Before you can build up your navy you must satisfy some building prerequisites (“trees”): certain ships require certain buildings and these buildings must be advanced to a prerequisite level. Every building can level up to 4 levels, with each level affecting a building differently. Buildings that produce resources will provide more resources; a farm will provide more food, housing permits a larger population which in turn enables you to build larger, stronger armies, distribute more resources to the home land and export your surplus. Strategic distribution of resources can earn you greater reputation and bonus specials by the time you reach the endgame. Building outside of the standard building tree are called technology centers – a beta building that allows you access to an alternative technology tree that gives special bonuses like increased food production or reducing corruption around your island.

I found the controls are little janky and the interface is somewhat cumbersome, and while these do not ultimately break the gameplay, I felt a little extra polish would go a long way on improving the intuitiveness of the UI. Even controlling the camera was unnecessarily awkward most of the time. In an RTS, precision controls are key, but as far as the MMO interactivity, it never proved too overbearing over small amounts of time. So ultimately these minor design flaws can be overlooked.

For the casual gamer unfamiliar with RTS or MMOs or both at once, this may seem a lot to absorb at the outset, but once you have lost a game and played a few hours you really start to understand it rather quickly. That said, if you aren’t ready to pour money or time into this game then it’s not for you. I spent about 12-16 dollars per game, which last around 12 days. This was with the aim of exploring every aspect of the game, and I can report that some areas really aren’t worth the cost of admission.

But hey, the game is free to check out, so see how far you can get without paying. You may eventually feel it’s worth 10 dollars to win a game, or, if you have the discipline, you might just get away with playing a decent, slight twist on the RTS genre for free. 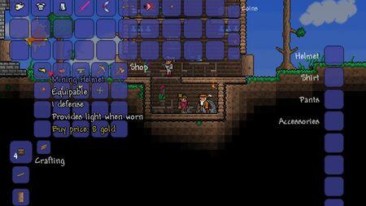 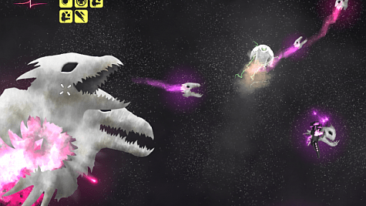