Follow Henry McAllister in your quest to discover the mysteries behind the Monocle and your ghost friend, Kain, while you go through many different and fascinating locations. A Man With a Monocle is a story-based but at the same time old-school platformer, featuring over 55 levels coupled with countless challenges to overcome, alternative passages and many hidden secrets waiting to be discovered.

Minimalist in nature, A Man With a Monocle borrows the control scheme of the earliest Super Mario Brothers titles while employing a solid artistic presentation.  It also provides players with the tools to design and share their own levels. The player is introduced to Henry, the semi-visually challenged Man from the title. Henry is a stately chap whose fancy dress would be better suited to high tea than a romp through an enchanted forest. He’s become lost in the woods somehow, and his monocle starts talking to him. Apparently, the eyepiece houses the soul of a deceased servant named Kain who has been trapped that way as a form of punishment. If you continue in the same direction you were already headed (you don’t really have the choice of going the other way; I tried), you might be able free the soul within the monocle from his otherworldly imprisonment. You must now traverse a forest, en route to a temple, collecting bones as you go. As you progress through various stages, the monocle with often pipe up with additional information on his life, his death, and his master (your brother, Charles) who disappeared years ago. There are some interesting twists and turns that surface as you unravel the mysteries behind the man who cursed Kain.

The game is a basic side scrolling platformer, and the graphics are distinctly low-tech, yet charming nonetheless. Controls consist of moving Henry with the arrow keys, and pressing X to jump. You can also climb up and down ladders. You can also make Henry duck by pressing down, but I didn’t encounter any part of the game where this action was necessary.

There are eight enemy characters that you will confront. There are slugs (green and purple), dropper blocks (think blue and red Thwomps), A Pac Man-type creature and his angrier Pac Man cousin, A blue eyeball critter, and a yellow hunchback that will eventually regenerate after you jump on him. They all run back and forth. None of them come directly at you, and you can defeat them all by jumping on their heads (save for the Thwomp clones, which you must run under). There is no variety in the way they move, but their speeds vary slightly. Once you stomp an enemy, he will not respawn, save for the yellow hunchbacks.

The level designs are equally efficient. Run to the right side of the screen, climb ladders, jump over gaps, and ride floating platforms across chasms. The light levels will change as you reach new stages, and there are some cave and temple areas to provide some variety. I was hoping that the ice levels would contain some of the token slip-and-slide physics, or even falling icicles as one might expect. Alas, there are no such modifications. The level designs do make good, creative use of what is there, and getting to some of the access points can be truly challenging. The full game also comes with a level editor that provides you with all that is needed to make your own fiendishly difficult stages and campaigns, and share them with other players.

The music is beautifully orchestrated, and sets a creepily serene tone, elevating the game above the simplistic level and sprite designs. The bits of story that you uncover as you progress also break up the monotony of the constant trek-to-the-right nicely.

There are no points awarded for crushing foes or collecting bones, though the latter are counted. If you manage to get all the bones in a particular stage, your health will be replenished, but seeing as you there is no limit to the amount of lives you have, you can achieve the same effect by falling to your death or running into an enemy to dispose of the last bar of health you have. However, for finding them all, you are awarded a golden bone. There are unlockables to be had, (another playable character, to name one) and this is how you obtain them. However, there is no way to revisit a level, so should you inadvertently leave a level without your golden bone, you’re golden boned.

I encountered only a couple of bugs in my quest, but none of them were game-enders. After receiving another bit of story from Kain near the end of the stage I was on, I backtracked to collect the remaining bones. When I returned to the point that should have brought me to the next stage, nothing happened. This was corrected by hitting the escape key and continuing my game, so while it was an annoyance, it was wholly fixable.

I also found the mechanics of jumping on enemies to be surprisingly specific; there were times when I was well above my enemy, but because I was still in the upward stage of my jump arc, the contact resulted in my losing a point of health.

With 55 levels (some of which are wickedly trying, even on the lowest difficulty setting) and the tools to create many more, AMWAM has a lot to offer to fans of the tried and true side-scrolling platformer. The designers have also indicated that any updates to the game will come free of charge, and that might include additional campaigns. A Man With A Monocle is simple and clean on the surface, but is dark and just a little bit twisted in what lies below.

Download the trial version of A Man with a Monocle for free, or purchase the full game for USD $9.99

One comment on “Game Review: A Man With a Monocle – Mario Gets A Slightly Sordid Period-Piece Tribute”

Indie Game Review – Hegemony: Philip of Macedon – A Back to School Special? 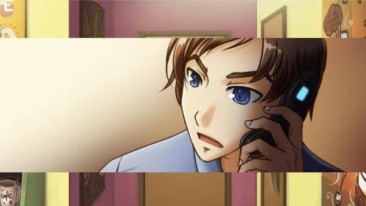 Jisei – The First Case: Someone’s Been J-Popped. Can You Discover the Killer? Gambatte!