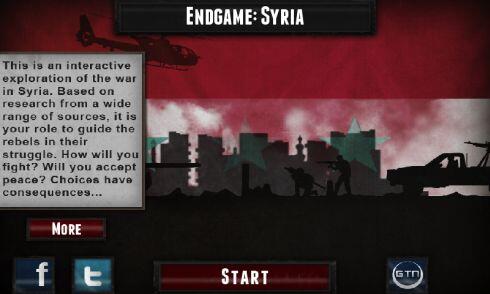 BRISTOL, UK. JANUARY 7th, 2013: A game that explores the Syrian civil war, Endgame: Syria, was recently rejected due to iTunes App Store’s strict content policies that include disallowing games that “solely target a specific race, culture, a real government or corporation, or any other real entity”. A spokesperson for the distribution outlet claimed that Endgame: Syria, which explores a real news event and aims to show users the range of factions and peoples involved in the situation, fell into this category and so was rejected. “This decision is a shame…as it makes it hard to talk about the real world. We had hoped that Apple would be more nuanced in how they applied this rule but we got a bit worried when it had been in submission for around two weeks without a decision – we then figured that because of the controversy of using the gaming medium to cover an ongoing war meant passing the game had become an issue for them.” Tomas continues:
“Our aim is to use games as a format to bring news to a new audience and submission processes such as this do make it a lot harder for us. I get that Apple want to make sure really offensive titles don’t pass into their store, but ours is far from that. In fact the response to the game has been broadly positive with much of the mainstream media picking up on the story. We’ll be making changes to the game and re-submitting it but it does mean we’ll have to strip some of the meaning and context from it to pass Apple’s submission process and that is not ideal.”

Interestingly, the game runs as an HTML5 application right here so can be played on an iPhone or iPad without needing to be installed.

Watch this fascinating video by Rawlings discussing the concept in further depth and the challenges of making a game about a war that is currently taking place:

This interactive experience is an exploration of events unfolding in Syria. This is a news-game; a simulation that uses interactivity to explore a real world event. Developed by GameTheNews.net in around two weeks, the game allows users to explore the options open to the Syrian rebels as they push the conflict to its endgame. Each choice the user makes has consequences – the types of military units you may deploy, the political paths you choose to tread. Not only does each choice impact the current situation but your choices may also impact the final outcome. Users can play and replay events to see how different choices on the ground might lead to different outcomes.

Will you choose to accept peace at any cost? What if the war goes badly and the only options left mean more extreme actions; would you agree to follow this path? This experience has been built from real news and presented in a design that has gone to great lengths to be sensitive to the subject matter it covers. More information about this is available from within the app itself and on the developers website; GameTheNews.net

Can you win the war and the peace that follows? Find out in Endgame: Syria? 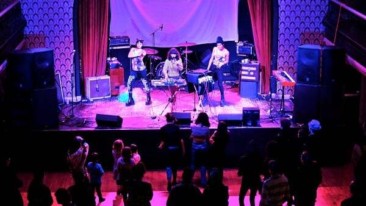