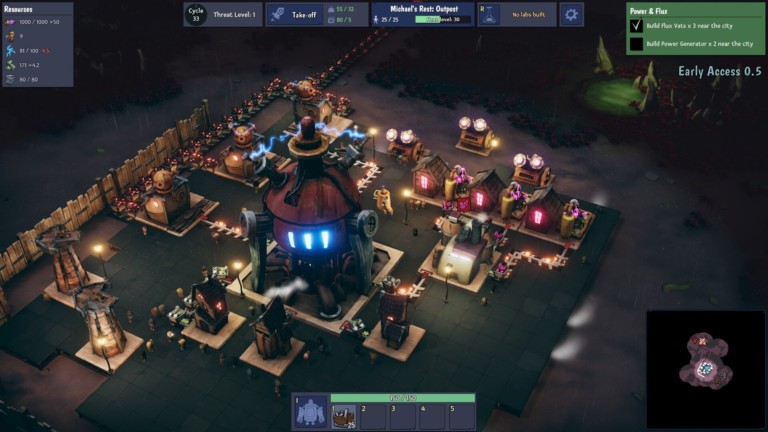 The basic mechanics are similar to Factorio (our Best Indie Game of 2020): harvest natural resources, refine them, and use them to build more stuff. Even the interface and incidental bits are similar, right down to the isometric view and the use of a third-person avatar to take care of the running around and building.

And like Factorio, supply chain set-up is everything; Dream Engines isn’t about the stone-cutters, wood-harvesters, or food-processing plants, but rather the way they all work together as a harmonious whole, coming together as an engine of progress far greater than the sum of its parts.

Provided you connect them all with conveyor belts – technically in this game they’re rails, but the concept is the same – in an efficient way, of course. Placement is everything. Screw it up, and your supply lines get clogged, your workers go hungry, and your city falls apart. Screw it up badly enough, and weird neon insectoid creatures will destroy your city altogether while you watch helplessly, trapped in a maze of clogged rails and powered-down building, as happened to me during one early run.

What sets Dream Engines apart from its most obvious inspiration is its dark, whimsical setting and steampunk flavor. Your avatar is a crossbow-wielding robot, and early resources include trees that bleed and rocks that hover – not to mention that you’ve got to keep track of both conventional electricity and a power source called “flux” necessary for the more science-fantasy elements of your city.

Depending on your attitude, the emphasis on setting could cause additional headaches, since there’s a lot of text to work your way through to get a grip on things, especially once you start building research laboratories and progressing through the tech tree. Dream Engines is not a game for the impatient. 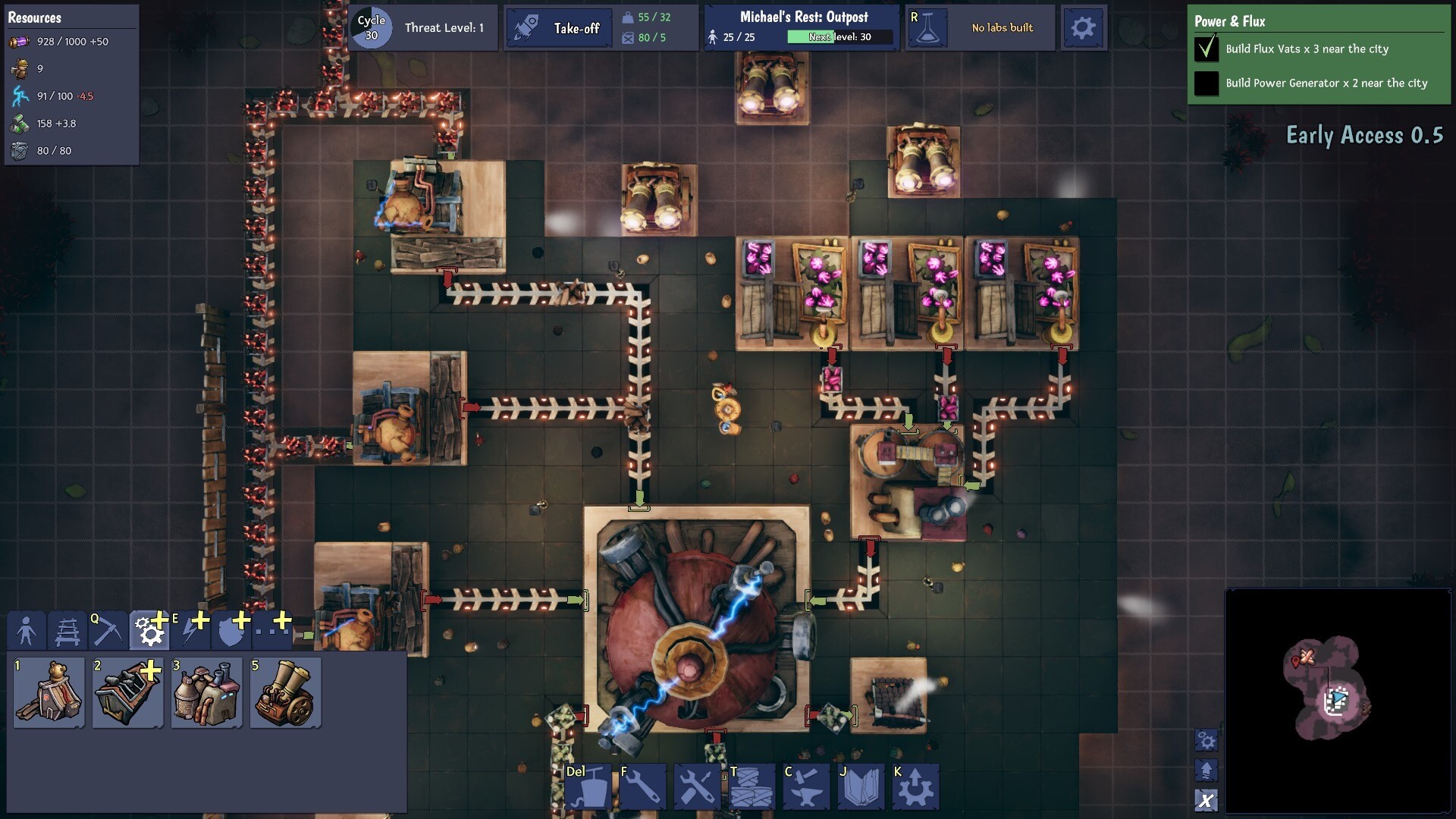 On the other hand, the weirdness of the setting and the fairly relaxed pace the game uses to explain it make for a more compelling experience if you’re into that kind of thing. Because its ties to conventional reality are loose, it’s harder to predict what’s going to come next.

The visual aesthetic, with lots of vaguely medieval-looking wooden buildings with steeped peaked roofs combined with the occasional steampunk-meets-Tesla mad science contraption, is beautifully done. Combined with a score more than a little reminiscent of Danny Elfman, the overall effect is the strategy game equivalent of a Laika Studios or Tim Burton stop-motion film.

While clearly inspired by Factorio, Dream Engines isn’t just a steampunk re-skinning of the cult favorite. For one thing, it doesn’t have the same complexity, for good or for ill. On the plus side, that means it’s a little easier to grasp, but at least for now – it’s still in Early Access – it also doesn’t have quite the same limitless potential.

What makes Dream Engines really unique, though, is that “Nomad Cities” subtitle: finish a map – or start to get overwhelmed by monsters, which gradually increase their aggressiveness – and you literally just fly your city elsewhere.

This adds all kinds of logistical considerations, because you can only carry so much, and you can also place buildings outside the boundaries of your city, meaning you’ll sacrifice them when you fly away. This adds to the importance of building placement; you’ll want to keep the most expensive, complicated stuff close to home, so to speak, so it travels with you.

This also has a nice side effect: if you screw up your rail placements and conveyor systems beyond reasonable repair, you can just take off, learn from your mistakes, and start over in a new place instead of trying to demolish and rebuild everything in the old one.

Dream Engines: Nomad Cities might not be for everyone – it’s a little on the twee and whimsical side for some and might be either too complicated or not complicated enough, depending on how passionate you are about intricate manufacturing simulations – but it’s got enough going for it to carve out its own little niche. 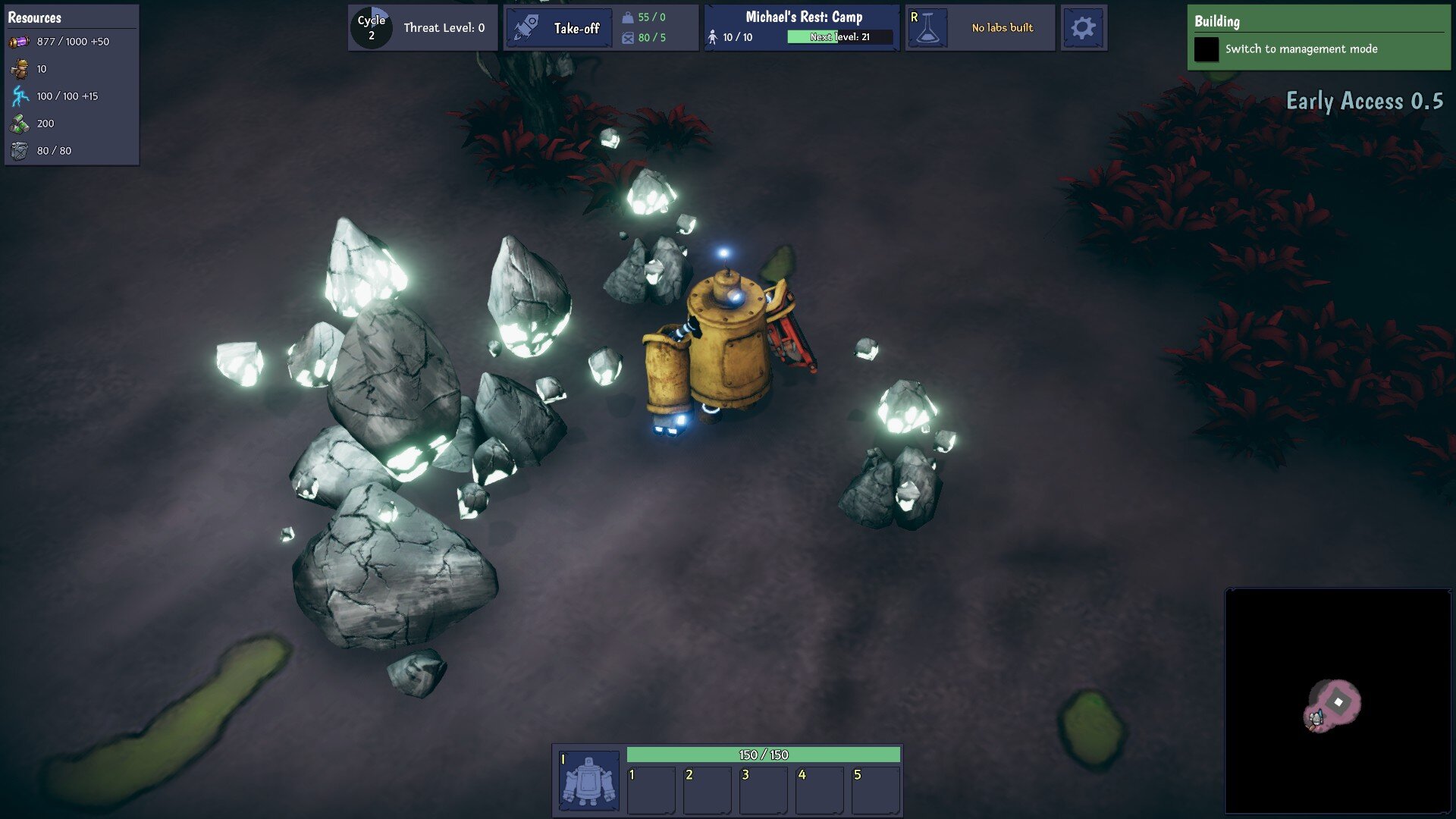 Moreover, it’s still in Early Access, which means that developers Suncrash still have time to lean into one direction or the other – whimsy or complexity – or even try to double-down on both.

Personally, I’ll be curious to see what Dream Engines builds toward as it nears its flight into full release (not to mention what buildings and resources are left behind after take-off), but in the meantime, this is already a compelling and intriguingly weird take on factory and city simulations. 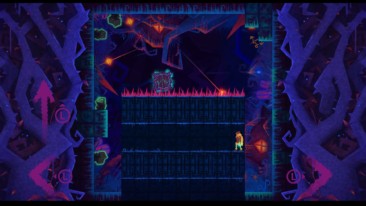 Tetragon Review – Flip Out and Flip Gravity with This Puzzle Platformer 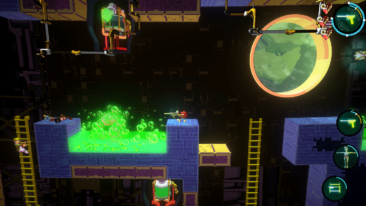