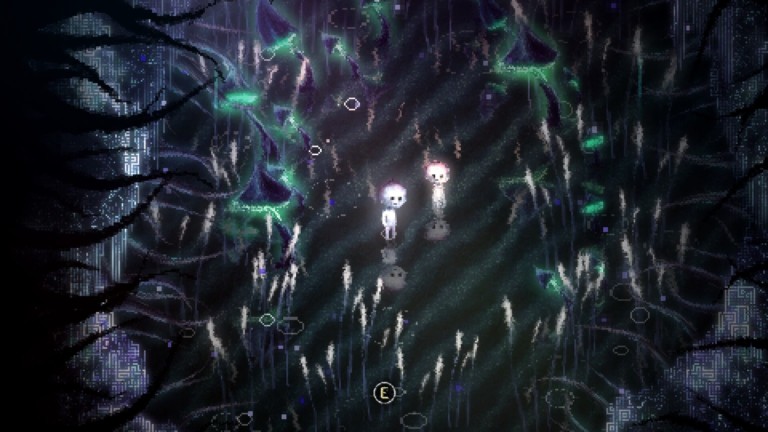 If I were to summarise Dap in a sentence, I’d say “Pikmin, but horrifying”. Dap is a top-down action horror game set in a mysterious forest. The player is placed in the role of one of the titular “Daps” and tasked with unraveling the truth behind what is causing a strange corruption to creep through the forest. In the process, it is necessary to gather up and rescue numerous other Daps, who will help in this goal.

A Forest of Both Meadows and Shadows

The story of Dap is delivered slowly and mostly in cryptic dialogue, but it takes little time to establish the basic premise; the Daps, little spirits reminiscent of the Kodama in Princess Mononoke, inhabit a magical forest that is fast falling to a terrible corruption of unknown origin. One of these Daps, controlled by the player, sets out to help the others escape this fate and, perhaps, to save the forest itself. 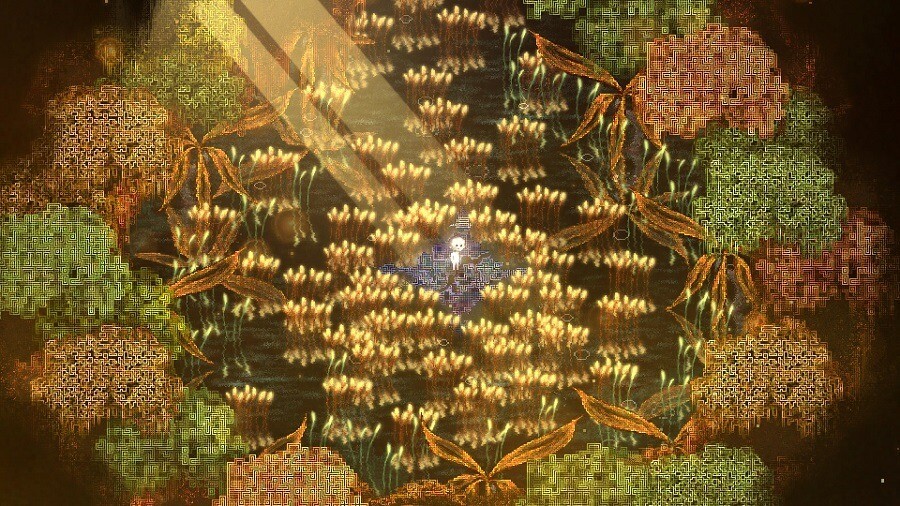 Dap does an excellent job of crafting its horror by way of contrast. This is, I feel, an underused trick, and it works very well here; the encroaching corruption and the terrible effect it has is all the more grim thanks to the innocent and beautiful nature of the Daps and their environment, respectively. The game does a particularly good job of making the Daps likable through their cute little “dap-dap-dap!” vocalizations.

Exploring the forest can range from an exercise in wonder to an anxiety-ridden nightmare. Stunning, colorful woods can quickly give way to twisted, infested pits. Much of the action is built around collecting Daps and using their combined powers to defeat enemies or unlock new routes.

Combat is fairly straightforward; a melee attack is available, but given the threat most enemies pose, it’s often better to rely on ranged magic. This magic gets stronger when you have more Daps with you, so it’s usually a good idea to keep your followers around. 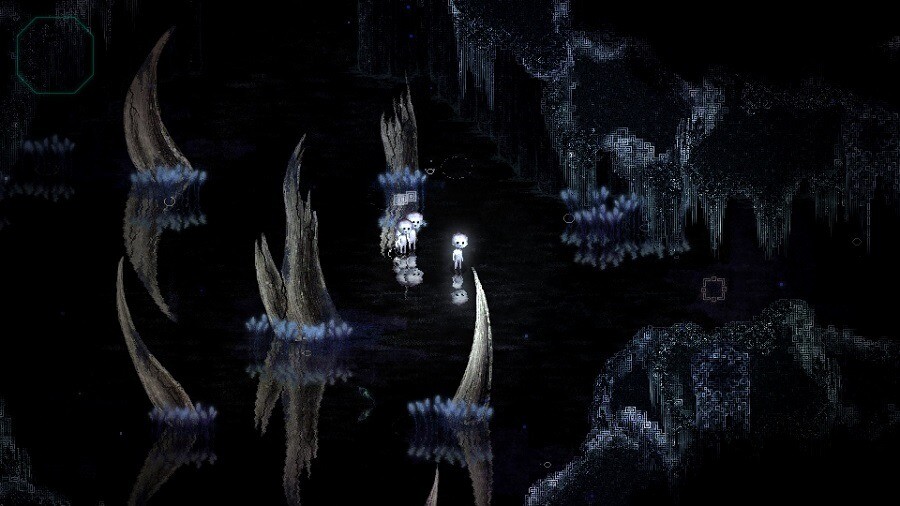 Be Careful of Corruption

This may be easier said than done, as there are plenty of horrors waiting in the corrupted forest. I found Dap to be surprisingly tricky at times, although this is more than mitigated by quite generous save points. Enemies come in numerous varieties, from relatively innocuous bird creatures to nightmarish monsters that fire projectiles from a distance. Amongst the most alarming threats are corrupted Daps, which will lunge at your group with vicious cries.

More insidious than the enemies themselves is the corrupting force flowing over the forest. Some areas feature an eerie red glow that permeates the air and staying there for too long will cause your own Daps to suffer corruption. Stay long enough and they will begin to turn on each other and attack, brutally decimating both you and your group in a bloody massacre. This can be avoided either by rushing through the corruption (a risky endeavor when enemies are about) or by setting campfires with a limited resource, creating a temporary safe space. These fires can also be used to refill a healing potion bottle using harvested mushrooms. Managing these two resources makes for a key aspect of survival in Dap. 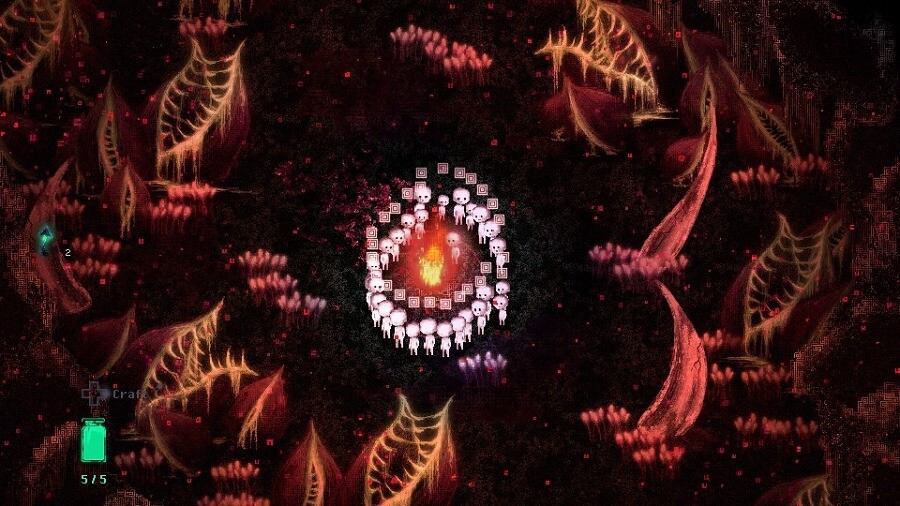 Going up to the Spirit in the Sky

Once a level is finished, the Daps evacuate to a spiritual garden in the sky. Here, you can plant trees using a rare item gathered from the forest and help them grow with another, crafted from leftover resources that you didn’t use to stay alive. This is a fairly simple activity, but it is a welcome escape from the tension below. It’s also rather nice to see your rescued Daps chilling out away from all the horror.

Visually, Dap is absolutely stunning. Its pixel-based art manages to render both beauty and bloody horror in equal measure. The design work is also excellent, with bizarre and twisted creatures that are sometimes unnervingly close to their natural cohabitants of the forest.

The music and sound design back this up with gentle, serene tracks broken up by sudden turns to more jarring music when the danger of the corruption gets too close. 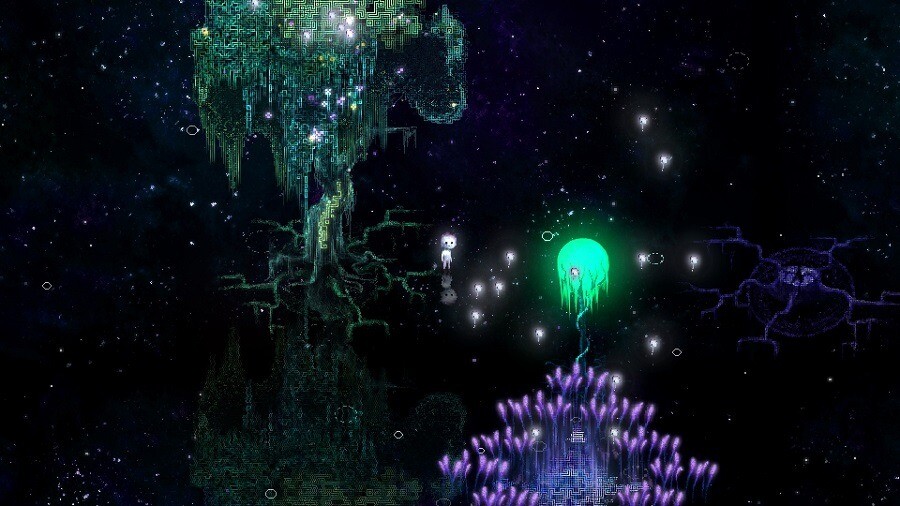 Dap is a superb horror adventure game that achieves the impressive feat of making the sometimes fairly detached overhead perspective genuinely unnerving. Dap crafts an intensely gripping world through its subtle dialogue and beautiful visuals. Its reliance on the unusual principle of managing a large group of followers makes for some refreshing gameplay, too. If you’re looking for an engaging horror adventure set in a compelling world, you should definitely have a look at Dap.

Dap is available via Steam.

Watch the official trailer for Dap below: 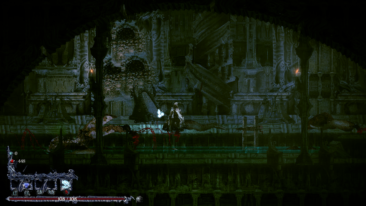 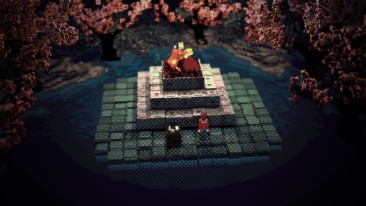