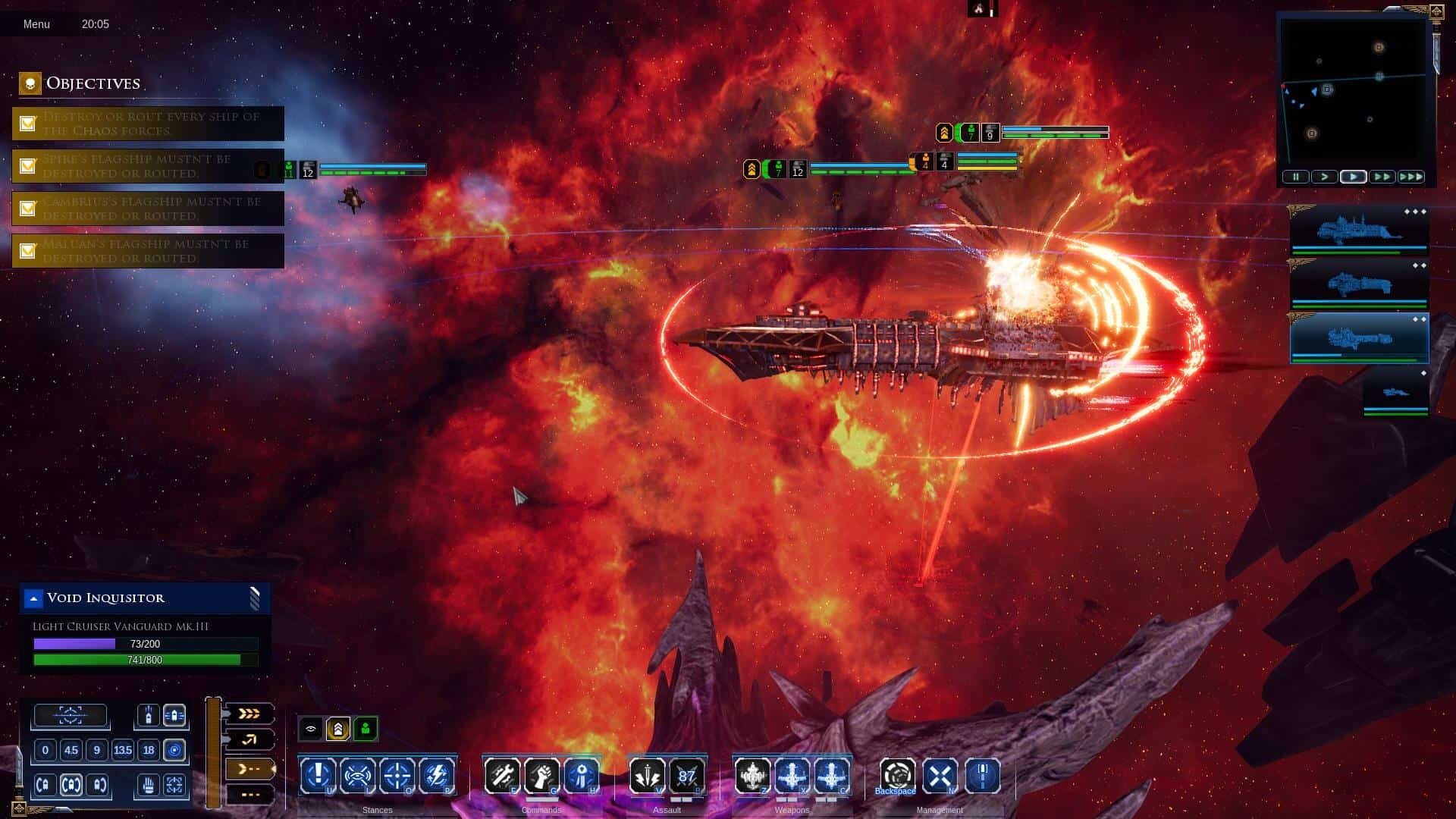 After routing the forces of Abaddon the Despoiler, Lord Admiral Spire and several heroes of the Imperium disappeared through the Eye of Terror. Trapped in the Immaterium, they gave chase to the traitor. They finally emerge into Realspace once more, only to discover that hundreds of years elapsed, and Fortress World Cadia is destroyed, finally overwhelmed by Abaddon.

The fleet begins the search for survivors of the Battle for Cadia. Once regrouped, they will bring the fight to Abaddon and his ilk, proving that this fight is far from over.

Sects in the Campaign Room

After a short string of instructional missions, the campaigns become available to play. Each one follows the path of one of three factions, with a fourth reportedly in development: the Imperium, made up of the Terran races; the fearsome Necron, a scourge of ancient skeletal androids bent on reclaiming dominance over the stars; and the Tyranids, a virulent bio-mechanical hive-mind that seeks to reduce sentient life into biomass, on which it feasts. 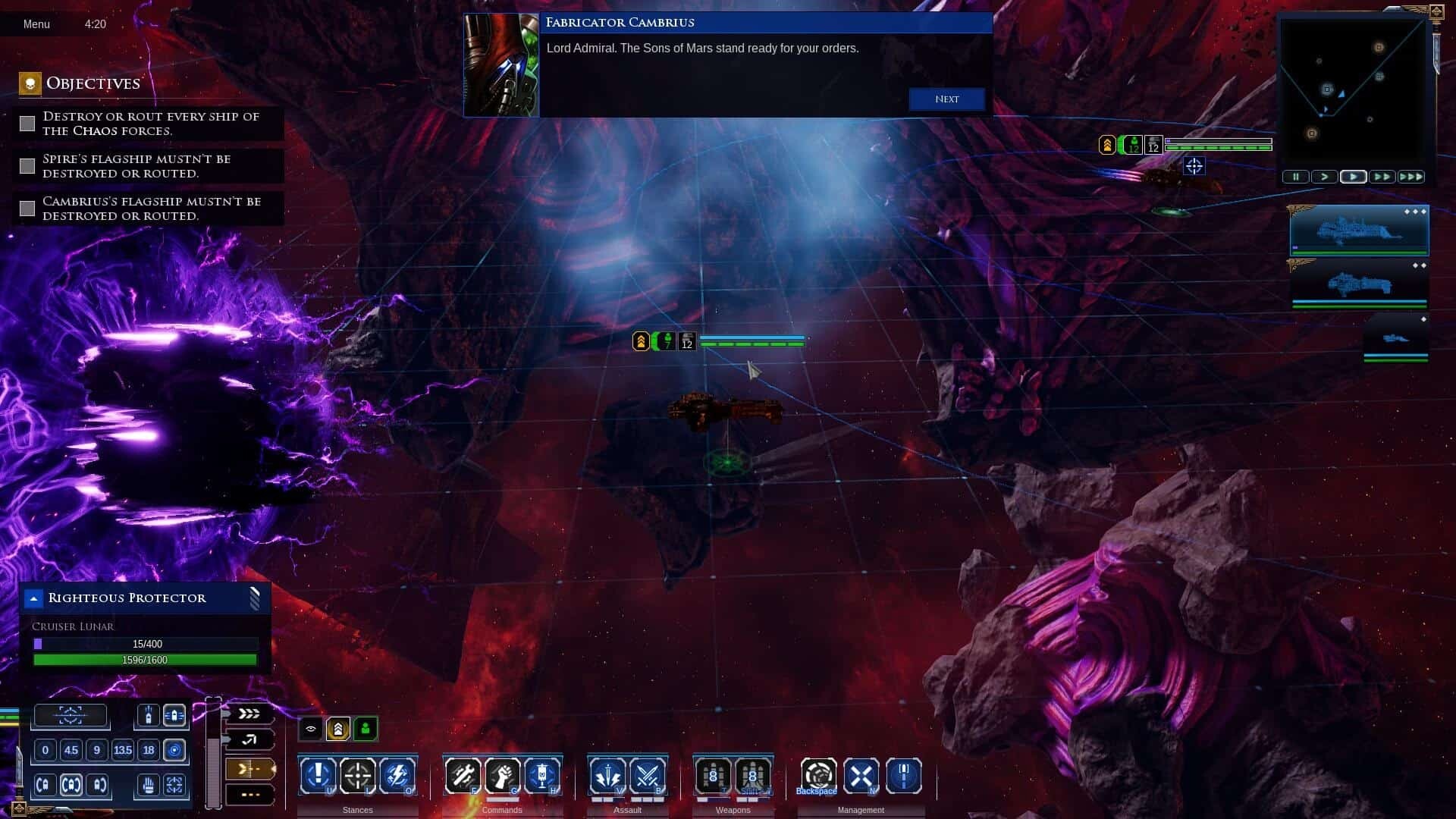 Each map is littered with pockets of debris, creating the spectacle of a cosmos coming apart at the seams under the strain of the aeons old galactic conflagration. The obstacles ensure that caution must be employed when traversing battlefields to avoid unnecessarily damaging the fleet.

Between missions, resources can be spent to contain the growing threat of oncoming forces looking to break up the revenge party. Battles are inevitable, but steps taken ahead of time can soften the overall brunt. 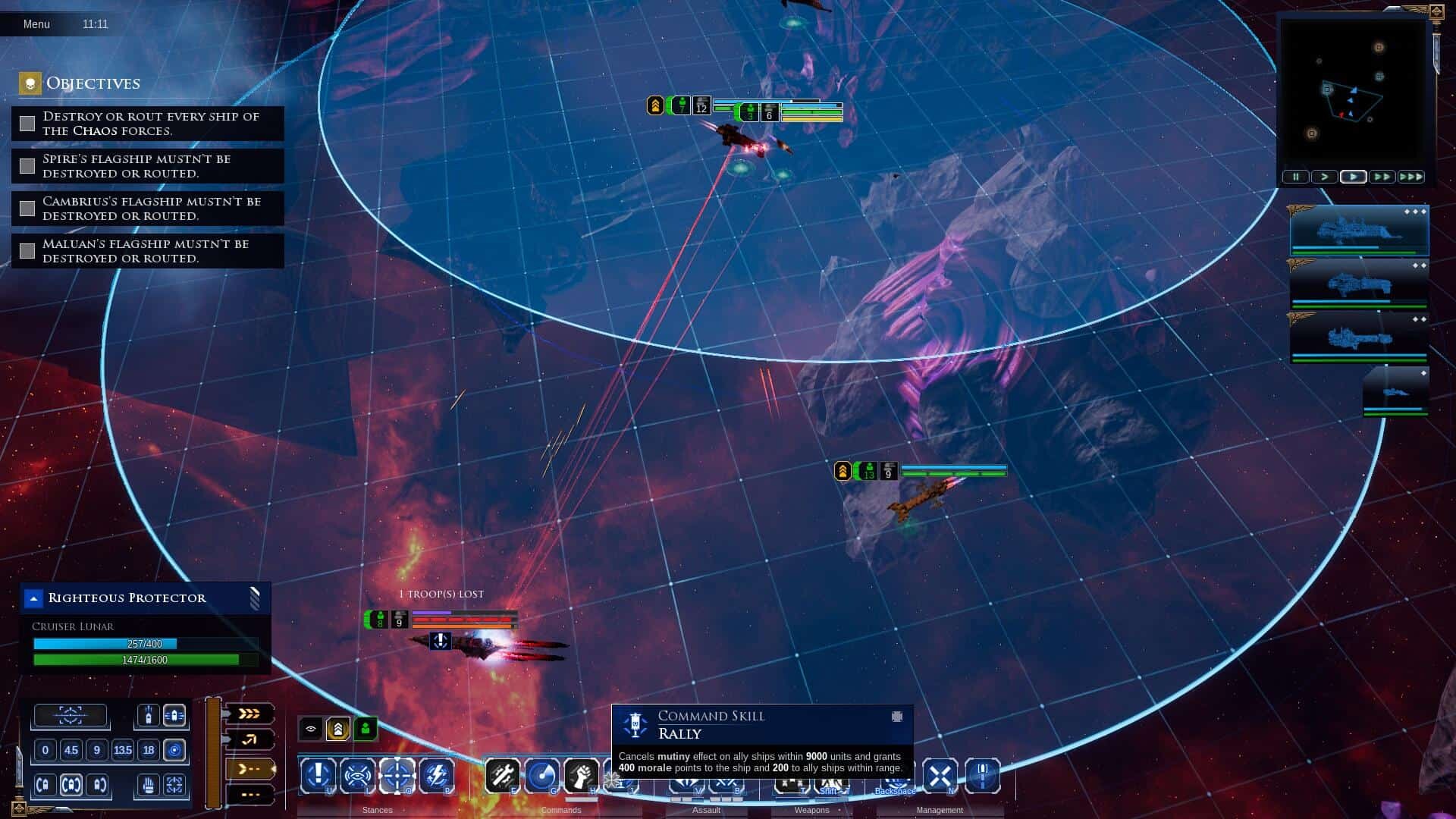 Your Dice or Mine

Though the campaigns can be challenged numerous ways, the real replay value is in PVP Battle mode. Experience gained in battle eventually unlocks fleet cap sizes, as well as additional traits that can be employed when assembling a fleet.

Each map contains several areas that generate strategy points once they have been claimed by a faction. Victory can be achieved by obliterating the enemy fleet or by amassing enough strategy points.

There are some issues in PVP balancing. This is partly due to the large number of factions and sub-factions available. Inexperienced players taking their chances with the Space Marines against a horde of Tyranids are probably going to get an up and close look at the stomach linings of the ravenous brood.

The various types of spacecraft dazzle, regardless of which of the 12 factions is selected. The larger ships are intimidating platforms comprised of massive space guns, dipped in egg, rolled in a batter of more massive space guns, and then fried to a blinding chromatic sheen.

The exception to this are the crustaceous Tyranids, whose bio-mechanical nature results in spacecraft that resemble enormous deep-sea horrors, replete with reaching tentacles and razor-sharp teeth.

Watching the hull of a fortified Space Marine battleship get punctured by a miles-long tongue as a means of consuming the crew within really amps up the creep factor.

Blast From The Future

Destructive energy weapons – like the fearsome Nova cannons – scream across the battlefield, but these attacks must be used with care. Successfully connecting will deal a lot of damage, but they come with hefty cooldown timers. Determining where the intended target is going to be when the strike is deployed takes some guess work.

If charging an enemy head on, torpedoes can also gradually chip away at a ship’s defenses until a boarding fleet can be launched. Successfully boarding can hack away at a ship’s overall crew level, making it less effective in battle or disabling it entirely.

There are dozens of attacks, weapons, shields and warp points deploying and activating simultaneously. Keeping an eye on an entire fleet is an all-hands-on-deck task that demands quick thinking and constant attention. Watching the glorious carnage as it unfolds is a treat, even when on the wrong end of a beat-stick. 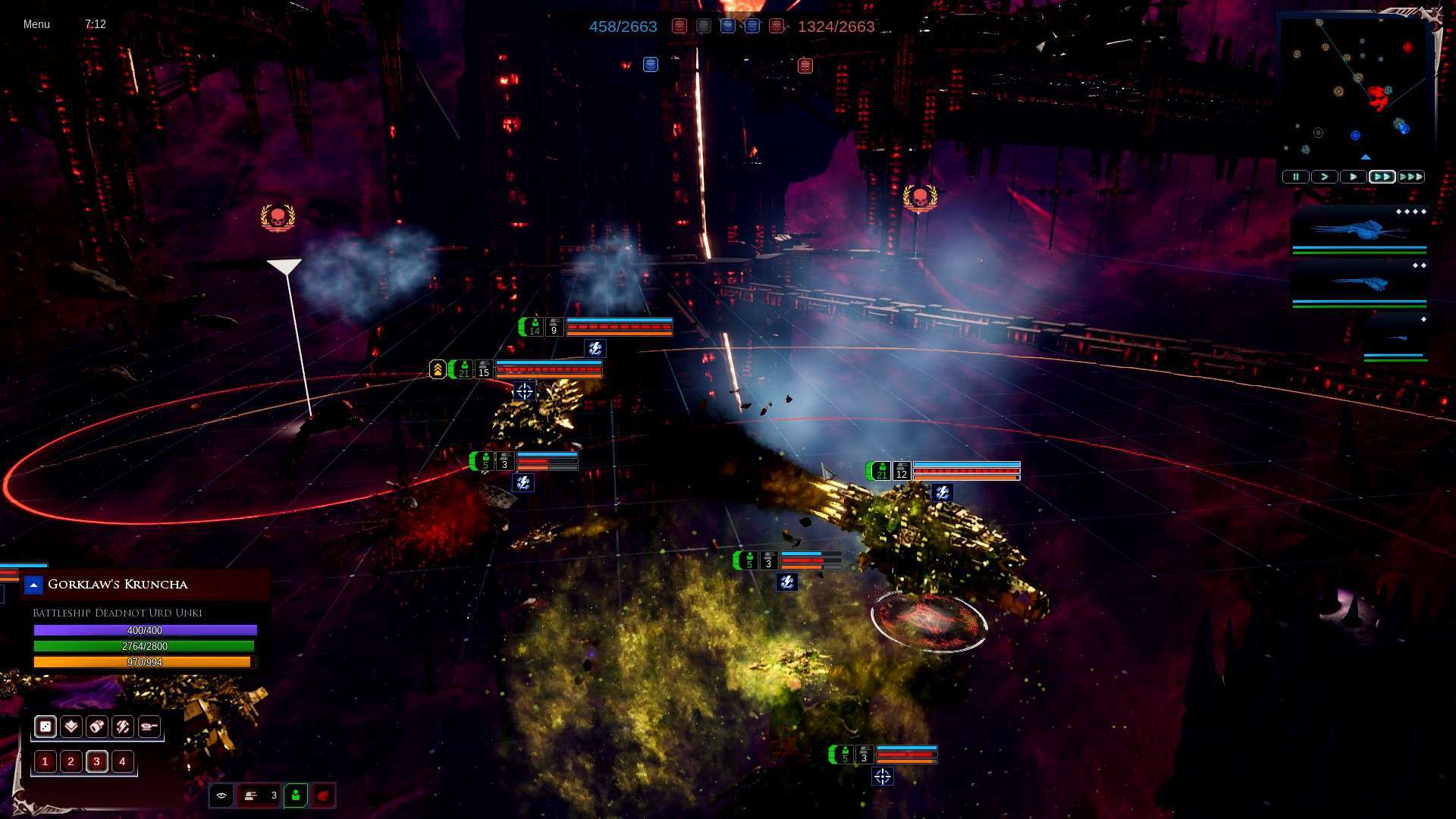 When speaking, the mouths of characters shift slightly – a visual technique that can be a bit disturbing at times – but breathes life into the stoic still images.

Dialogue is delivered brusquely and brims with valor, like an elder viking telling adolescent vikings to get off the lawn. And yes, that’s a good thing.

While playing the beta version, I did encounter some technical issues. In one instance, I received verbal cues from crew that my order was carried out, only to have nothing happen. They sat by happily waiting for the fight to come to them, all the while cheerily telling me that they were forging ahead to capture a strategic point.

Units would sometimes complete a positioning command, only to fly directly into the fray without prompting. The end result was a game of Red Rover where the opposing team was a wall of circular saws.

Tindalos Interactive has made many improvements since the beta and is still working to address concerns raised by the gaming community.

Brings The Hammer Down

These annoyances aside, Battlefleet Gothic: Armada 2 is a weighty and satisfying RTS. The game makes excellent use of the sprawling mythos, evoking the reputations of the game’s most celebrated figures. Even without the Warhammer 40k banner to its name, there is enough variety and nuance to ensure years of epic all-or-nothing deep space confrontations.

Watch the official trailer for Battlefleet Gothic: Armada 2 below: 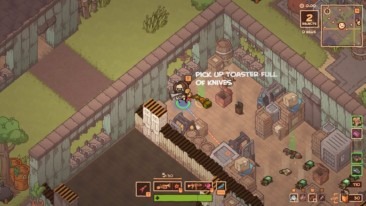 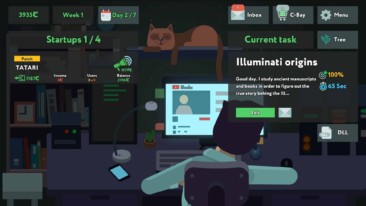 while True: learn() Review – A Game About AI and Cats