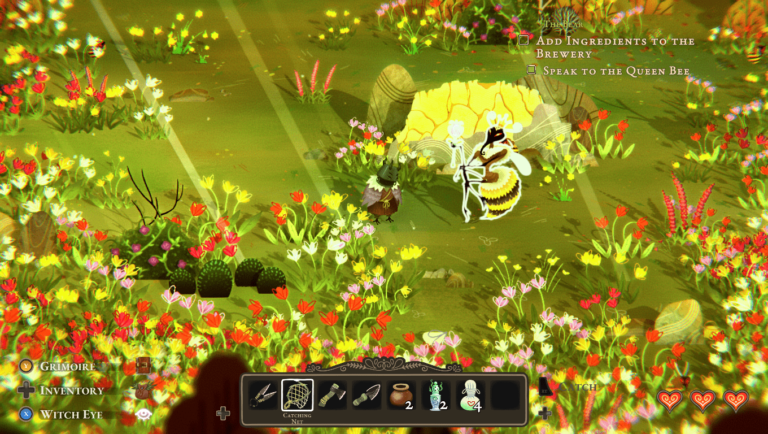 Wytchwood is a crafting-focused game where you play as a witch who has amnesia and needs to fulfill a contract she signed with a mysterious goat. The contract entails that you collect the souls of 12 individuals to wake up a woman stuck in an enchanted slumber. 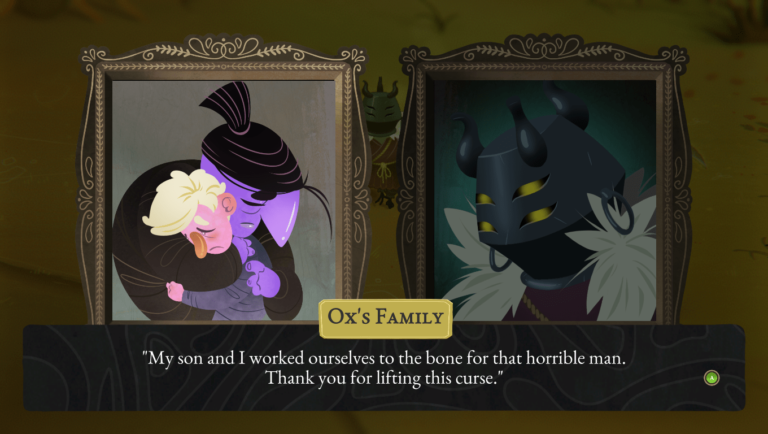 In order to fulfill the contract, you must gather resources to craft all kinds of things, from traps to devices to help gather even more resources and ingredients. Pieces of wood, feathers, animal eyeballs, goblin slime, dried worms, dragonflies, and fairy dust…there are so many ingredients to gather in this game and so many recipes to craft.

The issue is that I felt like I spent most of my time crafting with a lot of the same ingredients over and over again. I get it that Wytchwood is a crafting-focused game, but I wish it didn’t rely so much on recipes that require other crafted things on top of other crafted things. It’s to add challenge to the game, I’m sure, but it really makes for a slower pace.

Gathering resources means that there is a lot of back-tracking. Fast travel mitigates this, but fast travel points feel too spaced out to cancel out back-tracking entirely. This could become an issue for some since the game is around nine hours long.

As a result, Wytchwood has a game loop that involves the assignment of an objective, then gathering and crafting things to complete the quest. It’s fairly addicting if you don’t mind collecting and crafting, but most of the time it feels like a lot of busywork in order to progress quests forward. It’s something to keep in mind if you find the idea of collecting ingredients over and over again off-putting.

Thankfully, crafting is so intuitive! Open up the recipe book and hold a button to craft. This streamlined approach makes crafting feel easier to bear.

Gathering ingredients is also mercifully straightforward: Not sure how to kill an insect? Open up your handy witch-vision, which conveniently tells you that insect’s weakness. It’s a system that takes away a lot of the monotonous experimentation that comes with other crafting games.

Overall, I found the gameplay rewarding enough that I didn’t mind a lot of the backtracking. There were times where the multi-tiered quests felt a bit like padding, but Wytchwood allows for more of a laidback experience, where I could shut off my brain and go into autopilot. Collecting resources and crafting feels real zen most of the time.

Then the Charm is Firm and Good

Each quest involves collecting an individual’s soul, and each has a small narrative attached. These interactions with NPCs are entertaining; the small tales range from goofy to morbid while overall keeping a lighthearted tone. For example, reanimating a corpse seems morose, but the game approaches it with levity by making a joke out of the corpse only responding to questions with zombie groans. I liked this because it doesn’t take itself too seriously, and it isn’t too dark in these trying times. 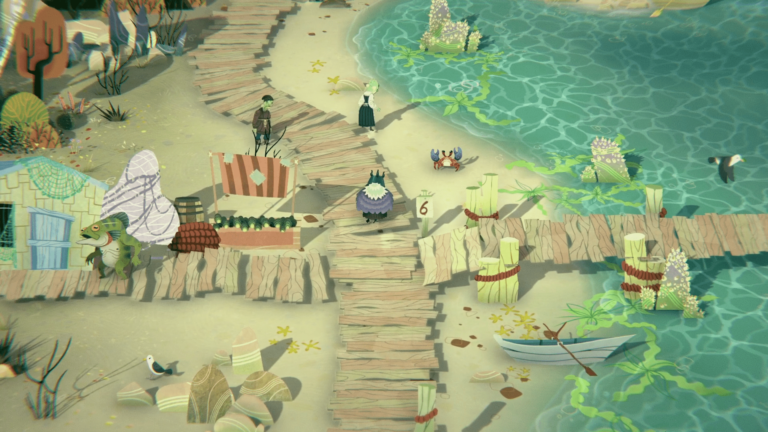 The tone is also complemented by its fantastic visuals and sound design. Every environment is unique and brimming with small details. Foliage moves when touched, small animals skitter away when approached, and tiny insects fill the air with appropriate buzzing sounds. Great sound effects and audio design here make each environment a treat to explore.

The whimsical fantasy music with a splash of uplifting melodies also stood out. My favorite track had to be “Swamp Area’s Theme,” featuring a banjo with a subtle drum that evokes loneliness and uncertainty.

Wytchwood is a fun crafting game with plenty of small narrative points to keep you engaged. There is a lot of back-tracking and collecting resources if you don’t mind that, but fans of the crafting genre will feel right at home, and the takeaway is that it expertly weaves crafting and story, making for a game that is equally addicting and entertaining.

Watch the official trailer for Wytchwood below: 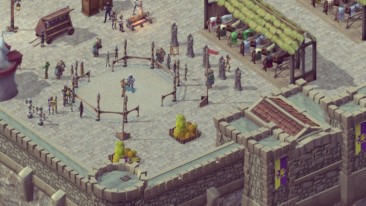 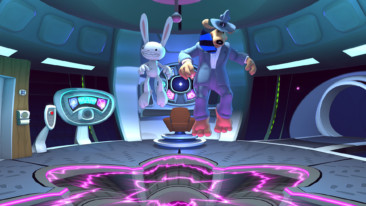 Review: Sam and Max: Beyond Time and Space remastered