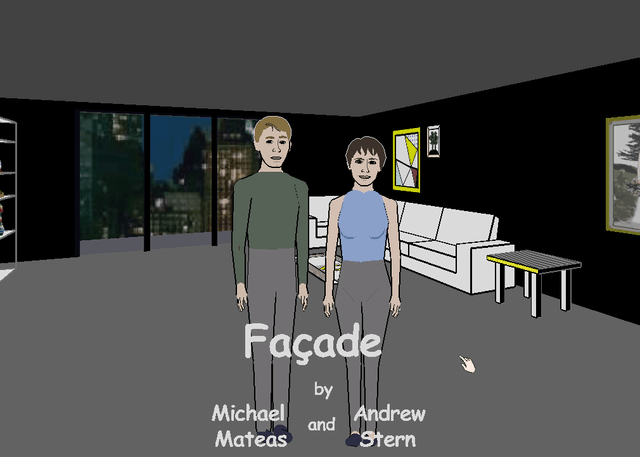 Called “the future of video games” by the New York Times, Façade is a return to the text-based games of yesteryear with some admirable (if sometimes frustrating) upgrades. The creators have forgone the large, over-the-top adventure and have instead opted to drop your character in the middle of a small reunion with two now-married college friends in their city apartment. Trip is a domineering, yet insecure urban go-getter, and Grace, his outspoken wife, is constantly redecorating the apartment. As the game begins, you can select the name of the third character, either male or female, and that name will be used whenever the other two address you.

You can move through the apartment using the arrow keys, and by hovering the cursor over certain items, you can interact with them. You can pick up and drink the beverage that Trip makes for you. You can examine Grace’s paintings and trinkets. You can even shake Trip’s Magic 8-Ball and watch “answers” appear on its screen. You can also hug, comfort and kiss both Trip and Grace. By using the keyboard, you input questions, statements and responses.

My first piece of advice when playing Façade is this: be patient. Though there is some room for verbal interaction, the story is still on rails for the most part, even if the path differs from time to time. You’ll find that if you try to get too conversational, Trip and Grace will often stare at you blankly, or reply with a generic “Um…yeah…” Try to keep your input simple.

I found I would be in the middle of typing a question, only to have Trip start to speak. Pressing the “Enter” key to submit my question caused Trip to stop dead in the middle of what he was saying. It’s a minor thing, but after it happens a few times, you start feeling less like a houseguest and more like a person at a keyboard.

My second piece of advice: try, try again. There are a number of different ways this story can unfold. At the root of it, Trip and Grace aren’t happy together, but how you act, and more importantly, how you react, are going to impact what dirty little secrets will emerge. Make sure to watch how Trip and Grace react, and listen to what they’re saying. Running around kissing everyone is going to get you tossed out of the apartment, ending the game. Basically, your best bet is to treat Trip and Grace like old friends. Give them time to speak, and you’ll learn a lot about them. Even if you find yourself bounced from their home, you’ll have more knowledge of their past to make use of the next time you play.

The graphics are somewhat muted in this title, but I firmly believe this to be a choice on the part of the creators. The level of emotion displayed in the faces of both Trip and Grace is really the most solid feature of this title. Combined with the excellent voice acting, Façade is worthy of multiple replays just to see how many dialogue trees you can access and listen to. The raw emotion and the minimalist approach to visuals makes it all feel a lot less like a video game, and more like a pleasantly disturbing intimate theatre piece.

For anyone who has ever fought the urge to hop on stage during a powerful moment in a stage play to directly engage the characters, Façade is your chance to do just that. The game doesn’t just feel like a stage play, either. At the conclusion of a play-through, you have to option to have the application transcribe the chapter in its entirety as a text document. These are automatically saved in a folder created by the program. It’s a small but highly effective touch.

Ambitious and captivating, even if the level of interaction falls short of what I had hoped for, Façade is another striking example of how video games are steadily emerging as a true art form.

[Jan 4th 2018]: Facade no longer seems to be available for download and the developer’s site is no longer publicly available.