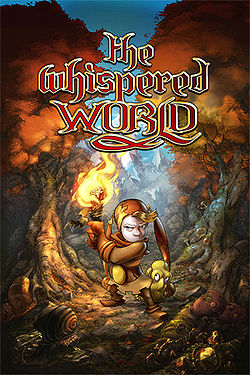 I had a hard time reviewing this one.  How do you voice your criticism for a game that looks this good?  It possesses a level of hand-drawn animation that hasn’t been seen in a game since Dragon’s Lair and Space Ace.  When I first saw screen shots, I knew this was a game I wanted to play and I was sure I was going to love it.  I read an outline of the plot and was even more enthused … then I played it.

Keep in mind that you may not experience all of the following because it may be a compatibility problem with my system.  Though I’ve never experienced any of them with another game on this computer and the system is well beyond the game’s requirements.  Also note that, after a little surfing, I found that many others were having similar issues.  If you check out the official game forums, you might find a solution to a particular problem you’re having, but the multitude of issues there does not bode well for the game.

Not a single cut scene ran smoothly.  The audio during cuts skipped and repeated so badly that there was no way to understand what was going on. The cut scenes also have a sort of washy half-finished look to them too.  The animation just isn’t as crisp as the rest of the game.  It makes me wish they had just stuck to in-game techniques for the cut scenes.

The load times as you walk between areas is excessive.  This is a 2D game with a little parallax scrolling.  There’s no need for it to take this long to load. Sometimes it just crashed trying to load new scenes.

The one pain anyone will experience with The Whispered World is the screen resolution.  The game runs at 1024×768.  No more.  No less.  And it plays full-screen without any option for a windowed mode in-game.  So, if you’re using a monitor that’s smaller than that (how do you live with yourself?) you’re out of luck, and if your monitor’s native resolution is higher, you might experience pixel stretching.

Thankfully there is a solution for those of us gifted with large monitors:

Navigate to the Program FilesSteamsteamappscommonwhispered world folder and find the config.ini file. Open it with a text editor and change the FULLSCREEN line to = no. Windowed mode for the win!

The voice acting is uneven; there are a few lively characters peppered throughout the game, but for the most part they all sound and act like they’re manic depressives on the verge of suicide with low-grade cases of narcolepsy. The lead character Sadwick is the worst offender.  Not only is he dull and depressing, but he also possesses a slurred and infantile manner of speech that will probably grate on you horribly.  You may get used to it or, like me, you may grow to wish you could reach through the monitor and break his jaw, just so he’d have to wire it shut.

Adventure games tend to be a linear medium: there’s a specific story to be told and we’re along for the ride.  This isn’t a bad thing – it allows for a little more depth of story than other genres.  The Whispered World, however, takes this to the extreme.  There isn’t a moment that doesn’t require you to do very specific tasks in a very specific order.

Take the opening area of The Autumn Forest for example.  There are quite a few different areas to explore and a couple of items to pick up within each, but a very long and detailed sequence of events that must occur in order to continue forward.  Not many of these events seem to make sense within the context of the narrative, nor are any of them laid out as tasks required to be done.  You’ll find yourself loading back and forth between areas for countless hours trying to figure out what needs to be done next.

Most games these days will give you, say, ten tasks to do in a particular chapter before you can move forward, and usually these can be accomplished in any order so that you’ll only become potentially frustrated when you’re down to one or two task you can’t figure out.  The Whispered World is one frustrating task after another.

Few adventure games are born without item collecting.  We’ve all done it. Grab items A through Z from your inventory and see if any of them affect the object in front of our character.  Try combining those same items to see if they make a new item that then can be used on the aforementioned object. The tedium of these tasks is usually helped by having the lead character have something witty to say when you try and combine things that won’t work together.  The Whispered World does this too, but it all comes from the mouth of the insufferable Sadwick, making you want to just stop trying.  Also, the solutions to these sorts of problems are sometimes so far out in left field that there’s no way you could reasonably see that a particular item was the appropriate one for the situation.

The Whispered World seems like a wonderful feature length animated film in the spirit of Bluth and Bakshi, shoe-horned into a game. There’s an interesting story here, but it’s shackled to such cumbersome play mechanics that the effort of seeing it to its conclusion becomes too much to bear.  There are some great walkthroughs on the net, so you can easily jump through the hoops to get to the experience if you’re feeling brave. With the length of time it took for this to come to market, I’m not sure how long it will be until we see more from this team, but let’s hope next time the gameplay sees the same polish as the artistry.

The Whispered World on Steam

Game Review – Dream Chronicles: The Chosen Child Merits a Closer Look In More Ways Than One