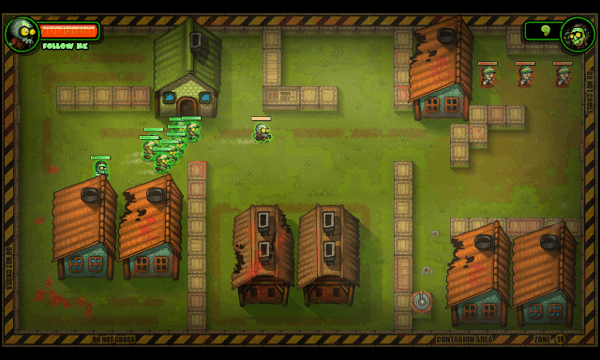 It seems like a zombie themed game is released every week. While we have been dispatching zombies for years, it’s rare that we get to play as a zombie. My best guess as to why we don’t? Zombies are widely considered to be slow and dumb, and no one wants to play as someone like that.

Most of us would rather play as a character with some smarts who can move as quickly through a game as possible. I, Zombie by Awesome Games Studio is a game where you play as a zombie, but while it has some familiar themes, taking up the titular role in this game is not what you might expect. 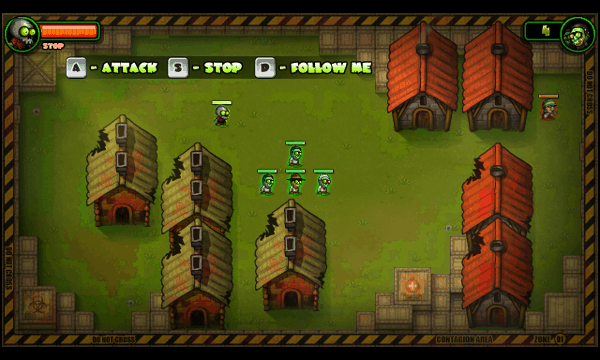 I, Zombie is a simple action strategy game whose goal is to survive and infect the living people in each level. Once infected, these zombies are under your control. You’ll have to strategize, order, sneak, and maneuver your way around the map to infect everyone without getting destroyed in the process. Once you infect the last living person on the map, the level is complete and you are rated based on how many zombies are still alive. Or undead, I suppose…

Playing as a zombie has some perks. You can freely move at a reasonable speed that can be equated to a fast walk, you can infect humans and turn them into zombies, and you have regenerating health. All of this is useful in helping you survive your enemies, which include gun-wielding humans and automated turrets. The main ability that sets this zombie apart from the rest is its ability to command other zombies.

Infecting humans is the main mechanic and it’s easy to do: Merely touch the human NPCs for about two seconds until they turn. After this, you can then issue them basic commands. You can order them to follow you, stay where they are, or give them permission to attack the nearest human. This core mechanic works well, as it’s simplistic and responsive. 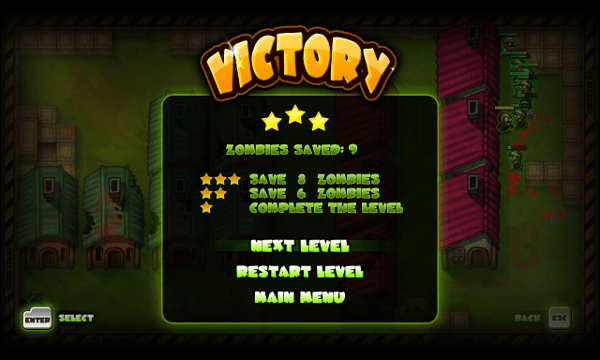 Commanding zombies is a great idea that could have been expanded upon because after a while, the game starts to feel repetitive. Since the design of the game is very simplistic, there are only a certain amount of core strategies you can use. Unfortunately, the game never does anything particularly interesting with this core element.

For example – say you have two zombies to order around and want to infect an unsuspecting patrolling guard – you must order the other zombies to infect him while you keep a safe distance. Once you eventually realize that the humans will shoot at whichever zombies is closest to them, you figure out that you must use the other zombies as bullet shields as much as possible. This is the main strategy you’ll have to implement to succeed in this game. It’s one of the few strategies you can use, and it’s used rarely.

The game incentivises playing smart and being cautious with every decision because one hastily decision usually leads to death. Since all the game’s levels are short, having to restart doesn’t feel frustrating. You don’t have to worry about challenge in this game because it’s mostly non-existent; I can only recall having some difficulty with the last level of the game. The levels themselves are not challenging but getting three stars in every level is where some challenge comes in.

Level design is another one of the game’s weaker aspects. It would have been cool if you got to infect a busy street, a hospital, a grocery store, or anywhere really as long as the levels don’t look as bland as they do. Instead you’ll play stages that have the exact same but different colored houses, the same enemy types, and wooden boxes scattered everywhere.

The gameplay only adds to this. Many of the rounds feel overly simplistic, which keeps them from being fun or challenging. It greatly hampered my enjoyment of the game.

There are some levels in the game, however, that are uniquely interesting. In one, you need to use just your commands to help maneuver a single zombie around as you are stuck in a specific spot. Successfully ordering around the zombie while making sure it survived was clever, because it changed up the game, relying heavily on my timing.

Another level that stood out also required precise timing, and tested my maneuvering skills. It featured enemies around every corner. Sneaking past them, while maintaining a proper distance was both challenging and fun. It’s unfortunate that there are only a few levels in the game that are notable, like this one. A few more diverse challenges like these would have made playing through far more enjoyable.

Once you’ve cleared the 20 levels in this game and spend around 90 minutes doing so, it becomes clear that the game could have been so much more than it is. Without diverse level layouts, varied game objectives, visual charm, or a narrative, the game misses the mark in terms of creating an engaging experience.

I, Zombie is a competent but bland casual strategy game that fails to create something that could have easily been great if there was more work and inspiration behind it. Instead the game will leave you feeling underwhelmed. The game’s core ideas – of playing as a zombie – is rare and interesting, but it’s brought down by lackluster level design. Ordering around zombies is not as fun or as interesting as it should have been.

Get I, Zombie on Steam 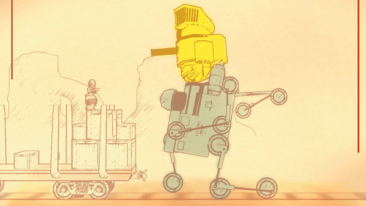 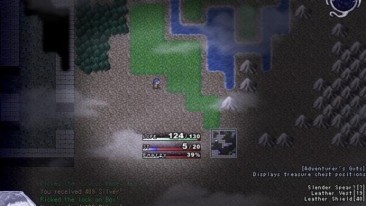 Review: One Way Heroics from Smoking WOLF Is Addictive and Unique