A parody of the open-world action genre, Retro City Rampage takes modern game mechanics and mashes them into an authentic 8-bit experience.

Equal parts fast paced arcade action and an epic mission based story mode, it’s all the driving and shooting you’d expect and a whole lot more! With missions that twist pages straight from classic game experiences, you get to re-live and rewrite history in a way only a modern anti-hero could!

Hailing from British Columbia, the same hotbed of indie development that houses Klei Entertainment and many others, Brian Provinciano’s highly anticipated Retro City Rampage pays homage to a massive number of games and pop cultural references, and tries to make them all play nice in the sandbox. For the most part, it’s an experiment that works fairly well.

The Meme-ing of Life

Using an 8-bit top-down Grand Theft Auto-esque playfield as a core game experience, Retro City Rampage also branches out into missions and mini-games, some of which employ slightly different mechanics. Each of these plot points and asides brilliantly spoofs notorious video games, celebrities and television programs from yesteryear.

Provinciano is to be applauded for the amount of detail he has managed to pack into this experience: Players in the know will find mock-up versions of Mario, Teenage Mutant Ninja Turtles, Ghostbusters, the A Team and Saved By the Bell as well as a slew of others. There are literally hundreds of references to be found in main missions, in story dialogue, or even in the names of stores found while exploring (a few which went over my head). Truly, any player that visits all spots on the map will have a nearly complete education of pop-culture references experienced by those of us fortunate enough to have grown up in the 1980s. Unfortunately, the same “A-HA!” factor might not be there for players born even a decade later; the older the player, the less likely he is to get most of the constant stream of inside gags.

We Must Go Forward…To the Past!

The protagonist (one aptly named “Player”) starts out as a henchman to the maniacal Jester, and by following the clown’s orders, he gets a feel for the main mechanics of the game. Jacking cars is the easiest way to get around the city, and can be done by simply hitting the triangle button. If police should be nearby when this occurs, your wanted level will go up (likewise if any criminal activity is witnessed). They’ll give chase until Player is out of sight, or until a bribe token is found in the city.

Player can fight cops and passersby by punching them, firing at them with various weapons, throwing them, or stomping them goomba-style. The most efficient method is to use gunfire (I found the jump-stomps very difficult to consistently pull off) and the player can either lock on and fire, or use the twin analog stick method, a la Smash TV. Melee weapons include bats, guitars and cardboard swords, and guns can range from standard pistols to the outlandish Ion Pounder AS5 (basically a Ghostbuster backpack). Or course, if a car is handy, a little hit-and-run goes a long way as well.

The opening chain of events leads the player to jacking Doc Choc’s car (think Back to the Future‘s DeLorean) causing Player and Doc to travel back in time, only to become trapped when the time machine sustains damage. Much of the story will involve collecting parts to restore the device to working condition.

While from a theme perspective, I can appreciate the selection of GTA as a throughline, scaling it back to an 8-bit version drains some of the punch of the main series to which RCR pays homage. While it is still a lot of fun to tear up a sidewalk and mow down countless innocent pedestrians, it’s hard to look past the fact that there are only eight possible directions in which to steer a vehicle. With the exception of a few faster vehicles, the speeds of the cars are nearly identical. Regardless of the vehicle Player jacks or the wanted level, dodging cops in RCR is nowhere near as daunting an experience as it is in true GTA titles.

The missions are fun, full of senseless violence, and packed to the gills with nods to games and memes alike. While the action can get repetitive (strap in for a ton of “go get me this” fetch missions) the laughs are in steady supply for those who wasted far too many hours blowing into cartridges to get them to work. It should also be noted that the checkpoint system is less than forgiving. Failure to fully complete a mission will often bring Player back to the beginning of a mission, regardless of how much progress was made prior to dying.

While the main mission provides a fair amount of game to plow through, there are an insane amount of side activities to tackle. Simply walking the grid of the city will double as a stroll down memory lane for anyone who grew up in the 80’s glued to their TV and console games. Playing through the story will unlock various ways to diversify the play experience, as well as augment Player’s style. There is a huge amount of content to mine here which may be the cause or the side-effect of the game’s long development time (over three years) – so completionists will find a small kind of paradise in this respect, or torture, depending on whether one view’s one’s completionist nature as a benefit or a hazard. If the tedium of completing quests becomes too thick, take on a rampage to blow off steam; most of these are ridiculous amount of fun, while others (such as the pistol rampage) feel slow in pace, and awkward to the point that they feel tacked on to flesh out the experience. There are some terrific little gems like the arcade where you can play complete mini games of popular indies reimagined for ancient game platforms that include Super Meat Boy and bit.Trip Runner and for some these alone may be worth the cost of admission. All scores are tracked online, so even after achieving a gold medal, there are still thousands of other scores to best.

While Retro City Rampage may lack overall polish, it positively gushes in admiration for the various pop-culture icons that phase in and out of the zeitgeist. The 8-bit approach is solidly implemented, though the control limitations that accompany such a style can sometimes hamper the overall experience. While the scaled-back feel will certainly tickle gamers in their 20’s and 30’s, players outside the recommended in-joke age range are likely to see a collection of bizarre disjointed statements set against a 48 color backdrop.

It is due to this generational exclusion that RCR will likely fail to appeal to some audiences. As hinted at in the title, Retro City Rampage is mindless fun that is best reserved for those who earned their gaming stripes in an era long since past.

Retro City Rampage can be purchased on the Playstation Network, Steam, or from the official website 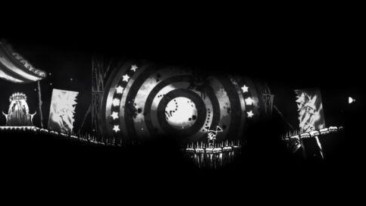 Review: Closure – what you can’t see can hurt you