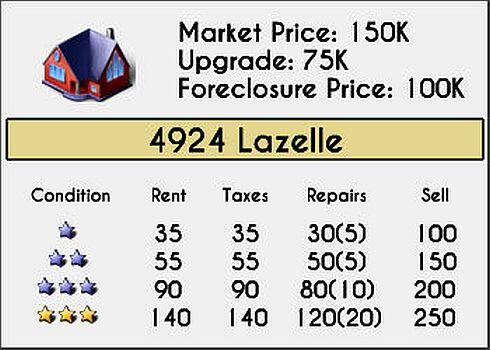 Real Estate Empire DECK is the sequel to Real Estate Empire 2 and is a streamlined, quicker gameplay experience available both as a video game and a physical card game. It is a quick little Monopoly-style property and profit game to be played without a board. The version that I played had a quick ‘Score Attack’ mode where I just had to make as much net worth over 12 turns. This is done by buying properties, upgrading, renting them and collecting monthly rents.

The simplicity of the game is a double-edged sword. While anyone can pick up the game and figure out the mechanics without much difficulty, the same lack of complexity does little to hook players.

Similar to Monopoly, if you collect 3 properties in the same community (represented by a colored bar where name of the street is) and upgrade them all to their highest value all 3 unlock a final tier of extra worth. However a lot of the communities have a very similar color and it’s hard without seeing them side by side to determine if what you are buying belongs to a set you already partially own. There is a light blue color, and a cloudy grey color that look identical unless you’re holding physical cards and seeing them at the same time. Each game I played I bought houses that had similar colors thinking I was adding to an existing community. Furthermore, houses in the same community are not even on the same street, so you can not even use the names of the streets to help tell apart similar colored community indicators. Mentioning physical cards, there is a ‘Print your own’ version of this that might play better. Not simply because playing the online flash version feels like nothing more than a distraction, but also because having another player with whom to compete for properties would add a lot to the game. There are also extra cards to draw and play that I was not able to experience in the Score Rush. These would probably add some much needed surprises and variety as the Score Rush didn’t offer much in that regard. Otherwise, it seems like there would be no other player-to-player interaction.

The Rent is Too Damn High

There’s not too much else to it, at least for the Score Rush. Real Estate Empire – DECK was easy to understand, and I did fairly well on my very first game with no tutorial or documentation. Aside from community colors being too similar, it is intuitive, and easy to pick up and play without having to slog through a rulebook. But this very simplicity is also its Achilles’ heel. The online Score Rush I played is a quick distraction, but offers nothing to really grab you with in the long term. I’ve given it a rating of 2/5, but keep in mind that there is a multi-player physical cards version that may have more to engage players. With all that in mind, what is on offer here, for those who may be interested, is a streamlined, faster-played boardless Monopoly. 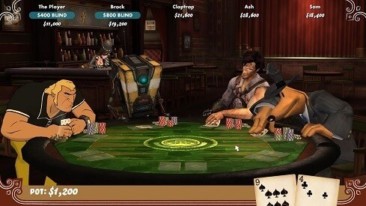 Review: Poker Night at the Inventory 2 from Telltale Games