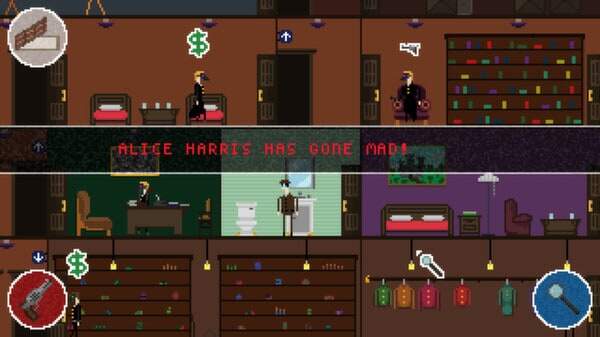 Noir Syndrome – What We Think

Noir Syndrome – from Dave Gedarovich and Glass Knuckle Games – is like the uncle that sits on the last piece of the jigsaw puzzle so no one else can complete the picture. He’ll claim to be a better puzzle solver and you can still have a pleasant afternoon. But everyone in the family knows he’s cheating.

Noir Syndrome is a hardboiled mystery thriller that’s serial rather than progressive. You play as a detective investigating a string of murders. Each case lasts fifteen days, after which the game resets and you start anew. The constant reshuffling makes Noir Syndrome endlessly replayable, proving that there’s a market for accessible brainteasers.

The game otherwise plays like a point-and-click adventure, insofar as clicking on people and places is the only meaningful interaction. You talk to people to compile suspects. You sift through objects to gather evidence. Then you cross-reference the data and use process of elimination to make the proper arrest. 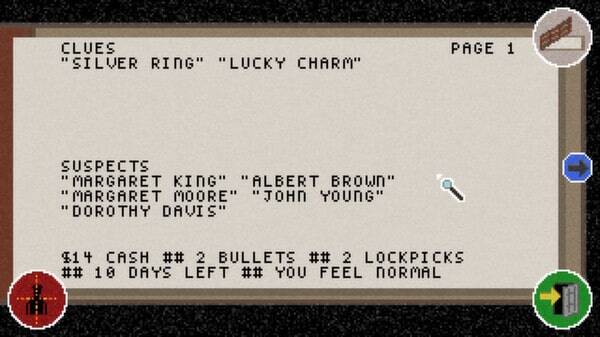 Noir Syndrome is a themed Sudoku (or it would be if you transferred it to a spreadsheet), a collection of logic puzzles that serve as brief yet enjoyable diversions. Logic, however, only comes into play when you check your notebook to figure out whodunit. Getting to that point requires ten to fifteen minutes of gameplay.

Are Criminals Smarter Than A 5th Grader?

The actual puzzle – and there is only one puzzle – is punishingly easy. Once you know all the suspects, three clues will usually be sufficient to finger a culprit, to the point that a third-grader could probably find the answer.

The majority of your time is therefore spent trying to figure out what the puzzle is, and there’s not much rhyme or reason to that process. The game will tell you which places to investigate, but there’s no guarantee that you’ll find clues once you get there. All you can do is click on everything and hope to find something useful.

And that’s the trouble. Though attractive, the Noir trappings are masking for an incredibly simple core. Noir Syndrome ineffectually tries to hide that simplicity behind several layers of random probability. There’s no way of knowing where and when you’ll find a clue so the search isn’t a challenge. It’s just a digitized casino game in which past precedent has zero bearing on future outcomes. 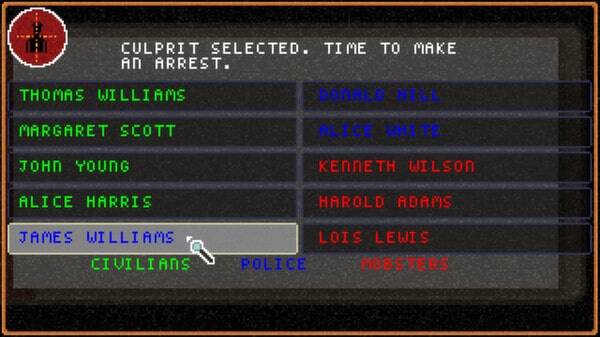 Any attempts to increase the difficulty manifest as punishment rather than strategy. It’s most blatant when you’re wanted by the mob and an NPC shoots you dead immediately after you arrive at a new location, but it’s also written into the code at a foundational level.

The developers don’t want you to run around spamming the left mouse button – though that’s the best and only way to approach the game – so they’ve tacked on a hunger stat that depletes with every click. You can eat food to buy more clicks, but the only way to find money is to click on random objects. If that doesn’t generate any income, you’ll starve to death well before the 15 days are up.

Found Some Bullets Under The Couch Cushions

Noir Syndrome tries to assuage the tax issues with multiple in-game currencies – including bullets, lock picks, and cash – but they all rely on the same flawed mining system so the balance is completely out of whack. Sure, you can leverage money to get bullets, but there’s not much you can do if you don’t have money in the first place.

All too frequently Noir Syndrome sends you home empty handed. After speaking to literally every NPC I encountered, I failed one case because no one ever provided the name of the final suspect, who happened to be the killer. In another, I starved to death without unearthing a single dollar. Both cases were unwinnable, but I had no way of knowing that until after I had already lost.

It’s a shame, because Noir Syndrome has a sneakily irresistible pull. It’s fun to pop in for twenty minutes to see what the seedy inhabitants of the 1950s have been getting up to while you’ve been away. Contrived as the difficulty might be, it does breed a certain degree of suspense because victory is never guaranteed.

The game also fosters a vibrant ecosystem of police, mobsters, and dozens of idiosyncratic locations. The moving parts make each playthrough unique, especially if you attempt to fulfill any of the game’s secondary objectives. You’ll need a fair bit of luck to crack the vault in the old fort, but it is there and that enhances the flavor. 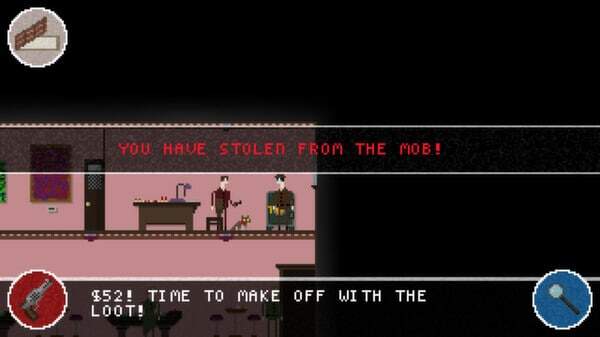 Though there’s not any ongoing narrative to speak of, each case starts to acquire its own story the longer it goes on. Here’s where you managed to apprehend the criminal while running from the police. Here’s where you were gunned down while stealing from the mob. It’s like living inside a TV procedural, and the atmosphere – as well as the overall structure – truly is exceptional.

Even He Whodunnit Doesn’t Know Whodunnit

Unfortunately, none of that aesthetic posturing has any impact on the central design problem. No matter how well you know the game, you’re still subject to the whims of chance when it comes to solving the crime. You won’t get clues if Noir Syndrome doesn’t want to share, and the bully behavior rankles every single time.

An Agent Without Agency

The game does become more consistent once who learn who sells what and where, and you can unlock reward tiers that grant you starting bonuses (lock picks are particularly useful). It’s just not enough given the circumstances. Defeat is commonplace in video games, but it’s a lot tougher to accept when you never had an opportunity to change the outcome.

Get Noir Syndrome on Steam 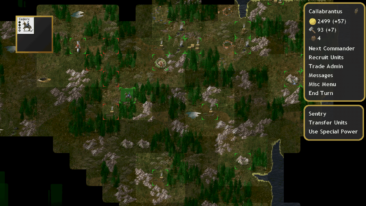 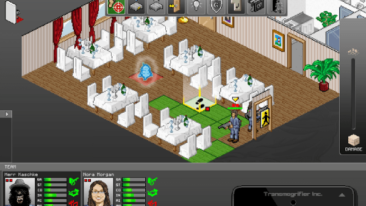