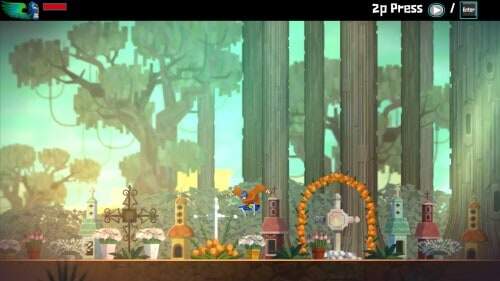 Guacamelee! What We Think

Set in a vibrant fictitious Mexican world (and netherworld), “Guacamelee!” from Toronto-based indie game developers Drinkbox Studios, takes classic Metroidvania platforming and infuses it with a combat system heavy on combo chains and some RPG elements to boot. The results are engaging, satisfying, and highly addictive.

Juan is a simple agave farmer tasked with helping the village prepare for a celebration. Before the fest can go down, a band of evil undead banditos destroys the governor’s mansion and kidnaps the governor’s daughter. Juan rushes in to rescue her, and though he loses his life in the process, he gains something greater: The power of the luchador!

Though his death should have left him a rotting husk, he maintains his magnificent physique, and by leaping through nexus points, he is even able to travel between the living world and the afterlife unscathed.

These two dimensions may look similar in appearance, but only by mastering the transitions between both can Juan hope to catch up to the villains. He eventually can leap between the worlds of the living and the dead at will.

The skeletal warriors left behind by the banditos can be dispatched using luchador strikes and grapples. Chaining these techniques together will result in larger monetary rewards (delivered in otherworldly piñatas that appear when a battle is concluded).

Use these funds to purchase new moves, costumes, or boosts to your attributes. Impressive acrobatic attacks and flashy duds ensure that when you unleash mind-blowing macho multi-hit combos, you also look amazing while you’re at it. 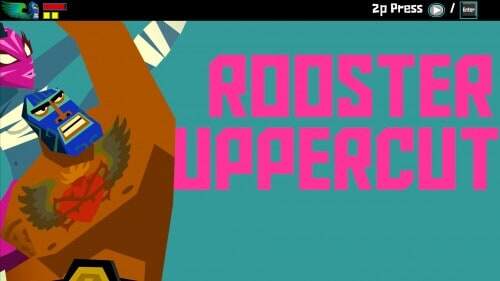 Some enemies come cloaked in a colored shield. Only one type of strike can bust this barrier, so button mashing is out. Once these foes take the stage, specific strikes are needed to maintain a healthy combo.

In your travels, certain statues can be toppled revealing a goat sage that will instruct Juan in new techniques. Some are suited to combat, while others will make it possible for Juan to reach new areas. Check the map to see what areas can be accessed once Juan unlocks a new skill: colored blocks that barricade an area all appear on the map, so you won’t have to leave extra exploring up to guesswork or memory.

There’s Something About Mariachi

Visually, Guacamelee is a gorgeous and vibrant. Towns are easy to navigate, and feature a bunch of nods to other video game greats (the lion’s share of which are indie projects). The character models – reminiscent of Samurai Jack in design – move fluidly and with overt machismo. Having said that, you can also play several female characters including Tostada, whose sleek moves are no less capable of a good smackdown. 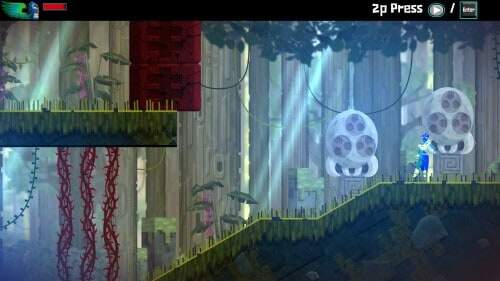 Luchador delights aside, it is terrific to see a game employ the highly underused Mexican culture as a setting for a game. Though there are some stereotypes, the color palette, and mis en scene, the folklore and costumes are a refreshing departure from the far overused Space, Brooklyn and Transylvania settings.

The soundtrack – featuring music by Rom Di Prisco and Peter Chapman – easily goes just as far as the imagery to elevate the luchador lore: The music that plays throughout is trumpeted out by an energetic mariachi band, maintaining the feeling of traveling through a remote Mexican villa. Temples and battle arenas alike are brought to life with their own unique fast-paced combinations of trumpets and spanish guitar. 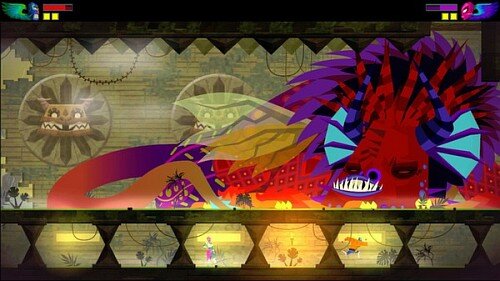 Should you opt to blast through the main quest, you can clear it in around 5 hours, not counting all the chicken-kicking you may get distracted with. Completion perfectionists can wrap up all loose ends in less than 10 hours. The co-op feature allows a second player to drop in at any time during the game, though this doesn’t add much to the core experience, either.

With these tiny shortcomings aired, what remains is still well worth the time spent. While it isn’t the lengthiest game on offer, what it does present is solid and definitely memorable.

With its superflat vector-based illustrative treatment, wildly humorous narrative (slathered in pop-culture references) and over-the-top battle sequences, Guacamelee! is what the kids are calling “an instant classic,” and one of the year’s best platformers.

Get Guacamelee! on Steam

Watch the official trailer for Guacamelee!: 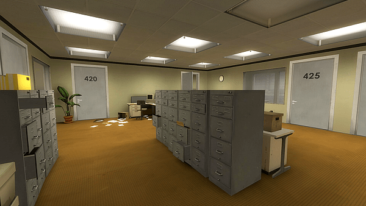 Review: The Stanley Parable – We Need to Talk… 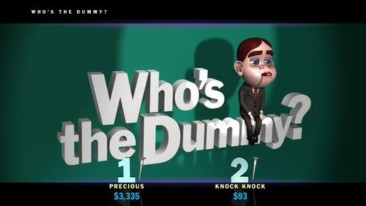