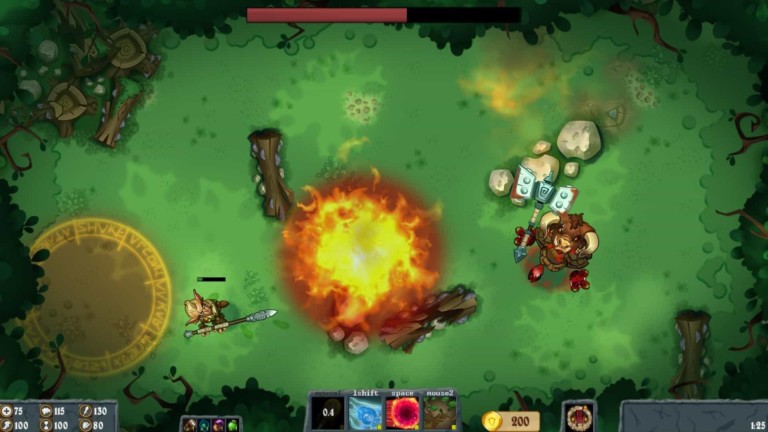 Flamebreak – What We Think:

Flamebreak could be seen as a cynical cash-in on a bunch of recent gaming trends, mixing up twin-stick Roguelike action with skill and item progression inspired by the likes of League of Legends and DOTA 2.

Play it for an hour or two, and any such cynicism disappears. Developers Nimbly Games have crammed the best of a bunch of different worlds into one lean – but tactically deep – little machine. 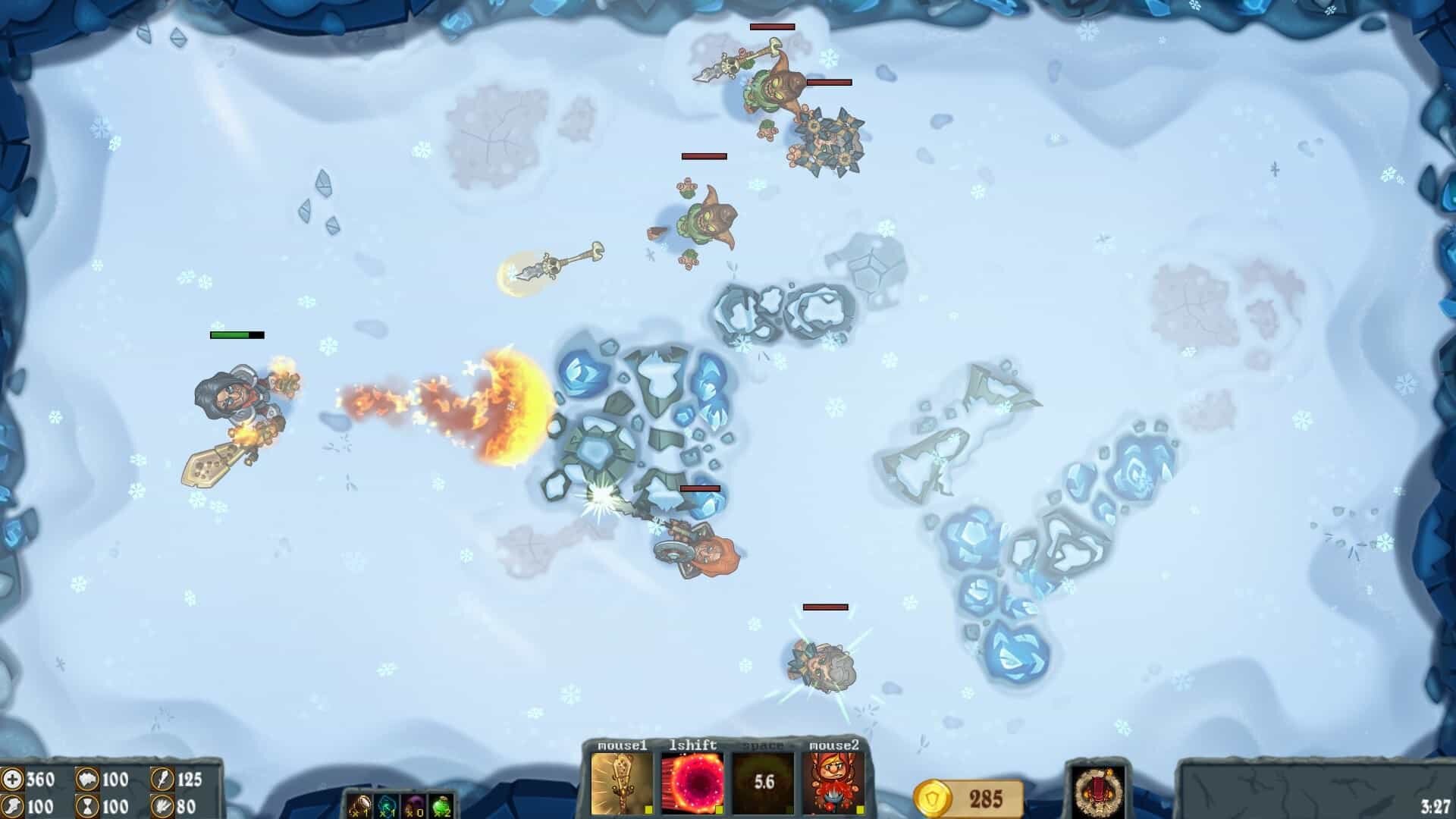 By strict definition, there’s very little MOBA in Flamebreak at all. It’s neither multi-player nor online, and instead of a giant battle arena proper, it’s comprised of a series of single-screen dungeons explored via an overworld map. Maybe call it a SODA, instead: Single-player Offline Dungeon Assault. On second thought, maybe don’t do that (it was just a first attempt – naming new subgenres is hard work).

Flamebreak isn’t a MOBA, but it certainly plays like one. You control a single hero with four skills activated by hot keys. You can level up the various skills – which range from things like summoning fire to teleportation and other escape methods – as well as enhancing them via item purchases that improve your character’s statistics without particularly altering play style.

Add to that the fact that various altars and temples show up on random levels – allowing you to curry favor among the game’s various demigods – and the ability to build “sets” of armor, magical jewelry and the like that synergize for extra bonus effects, and things start to feel very MOBA-like indeed. 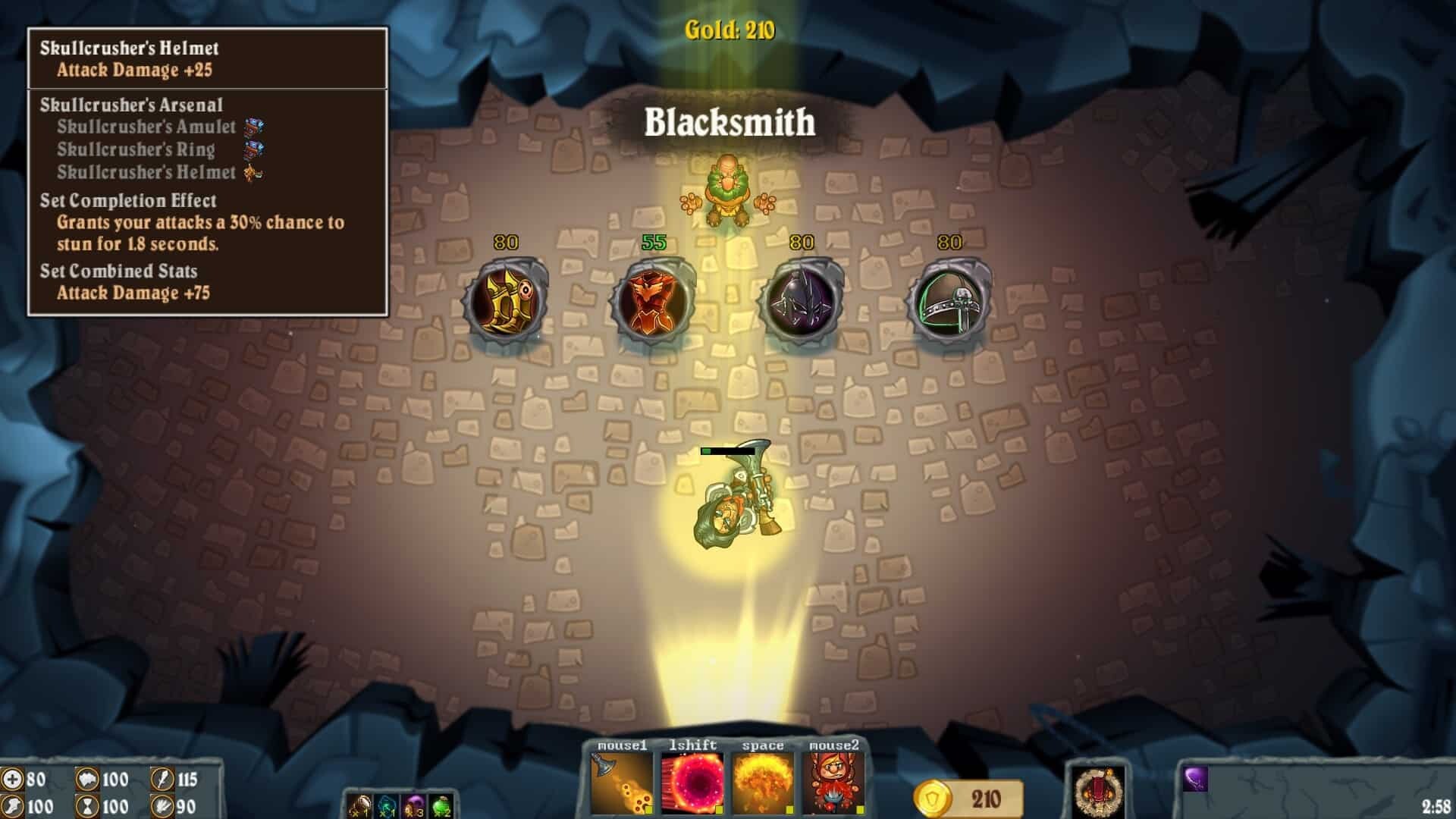 The pacing on each level also draws MOBA comparisons, or rather comparisons to the RTS games that gave rise to them. While the procedurally generated levels interrupted by boss fights and shopping opportunities feel more like the recent spate of action Roguelikes (i.e. The Binding of Isaac or Full Mojo Rampage), character movement feels sluggish by typical shooter standards.

And all of your skills – even your basic attack – has a cool-down period, so timing is everything. Hammering away at your attack buttons is a good way to get killed in a hurry. The key is planning your movement not only to avoid enemy attacks but also to ensure landing your own. This is where some of the special skills really come in handy. Ethereal Projection, for example, allows both for speedy travel and added damage. 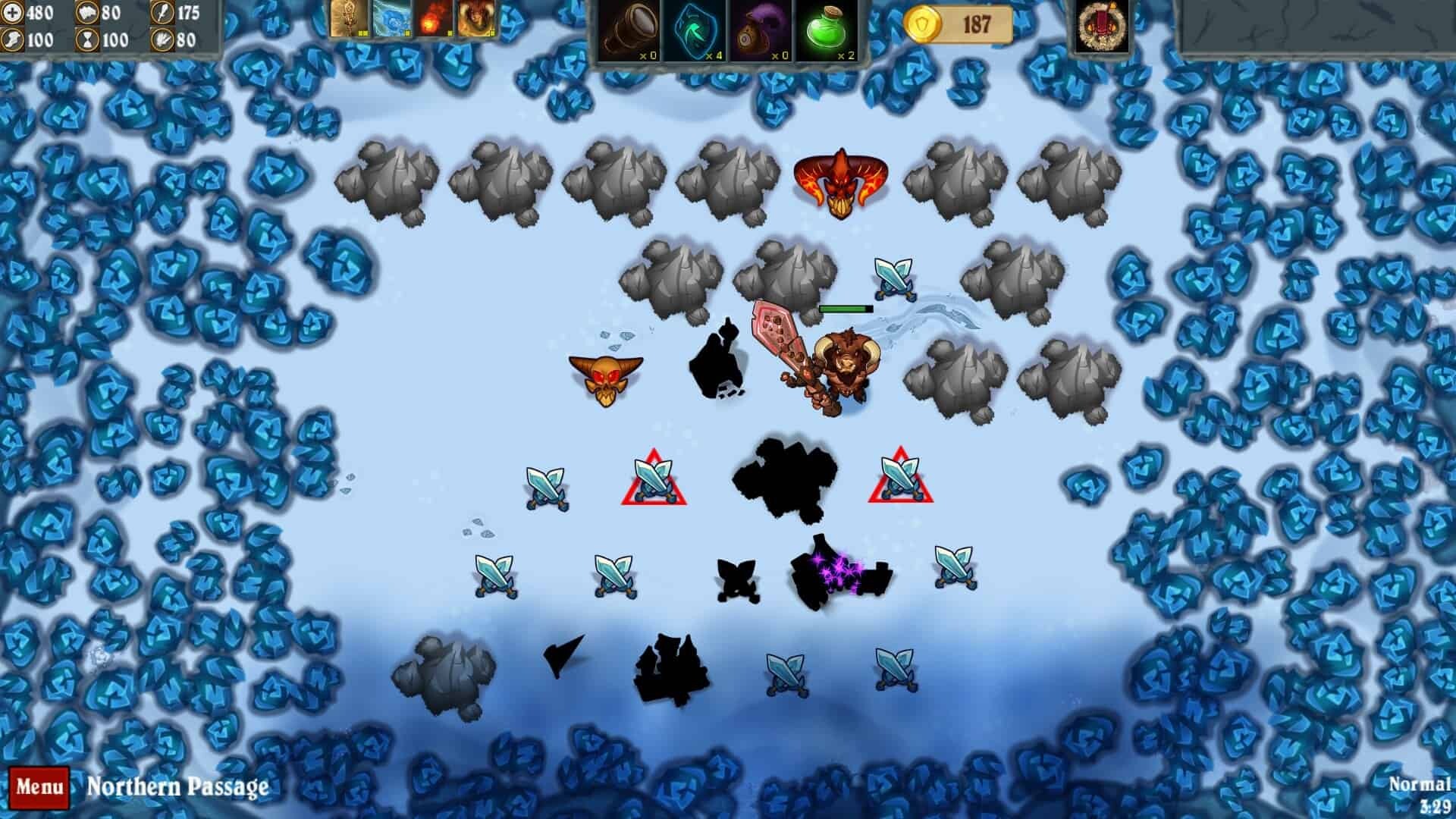 In between the battle scenes, there’s a separate set of tactics that apply to the overworld map. Since each space is a potentially fatal fight or an opportunity for extra treasure, planning your route is key. A shadow that creeps behind you as you make your way across each map complicates things. But still more items, like telescopes and magical dust, can help you pick the most fortuitous route.

Add to that mini-games for bonus gold, random character generation, mini-bosses, special hazard levels like blizzards or meteor strikes, and what seemed at first like a simple action game starts to look mindbogglingly complex. 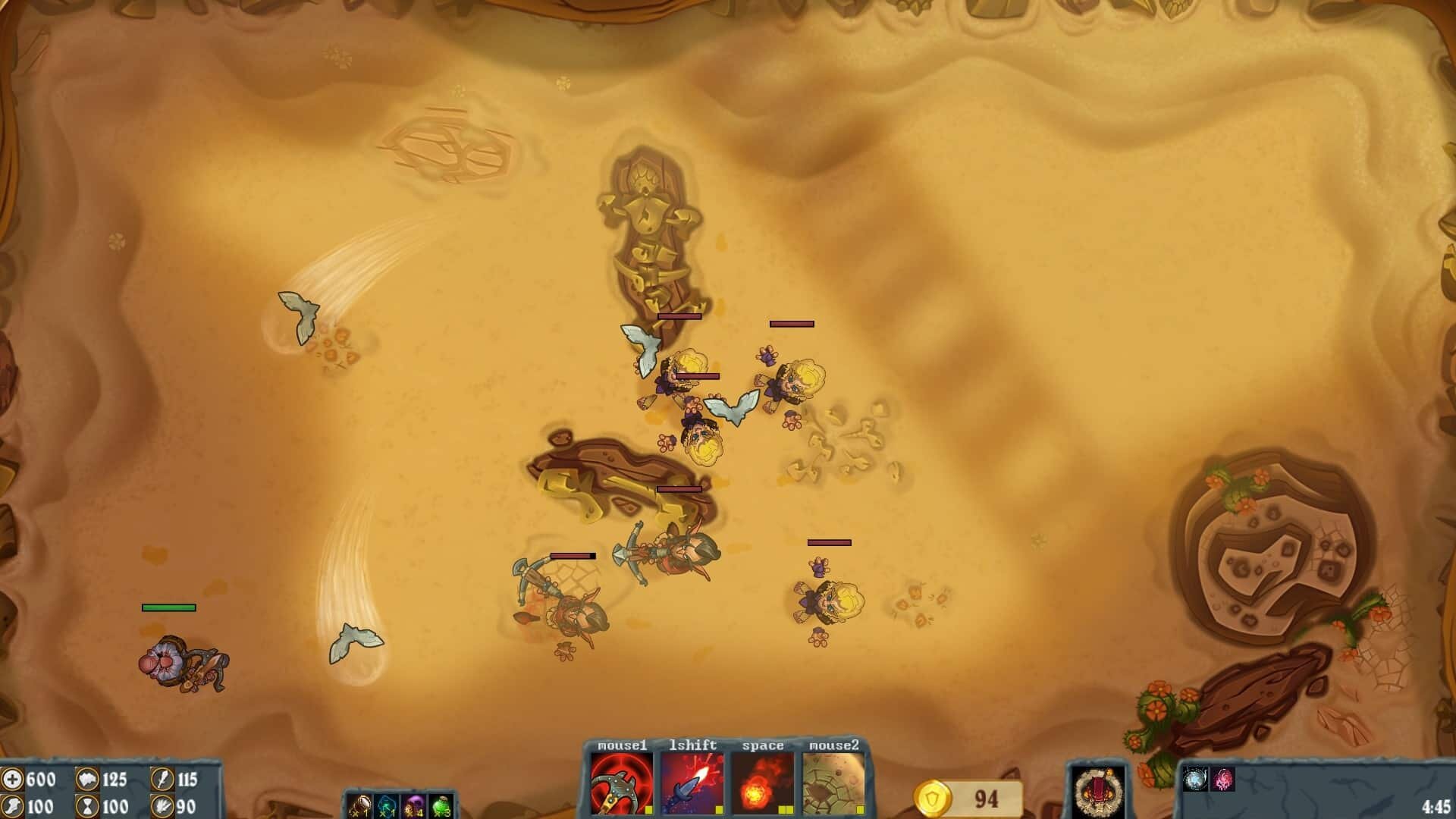 The nice thing, though, is that it never actually feels complex. Cartoonish graphics reminiscent of Mike Krahulik’s work on Penny Arcade keep things lighthearted. (The fact that characters’ hands are separate from their bodies is a weird choice, but I got used to it fairly quickly.)

So does the mix of fantasy themes and weapons, which range from crude spears and stone swords all the way up through muskets and grenades. While this does lend itself to some odd character combinations – perhaps you’d like to play a musket-wielding fairy who can shoot fire, or maybe you’d prefer a minotaur ninja with poison daggers – it also keeps things feeling casual. 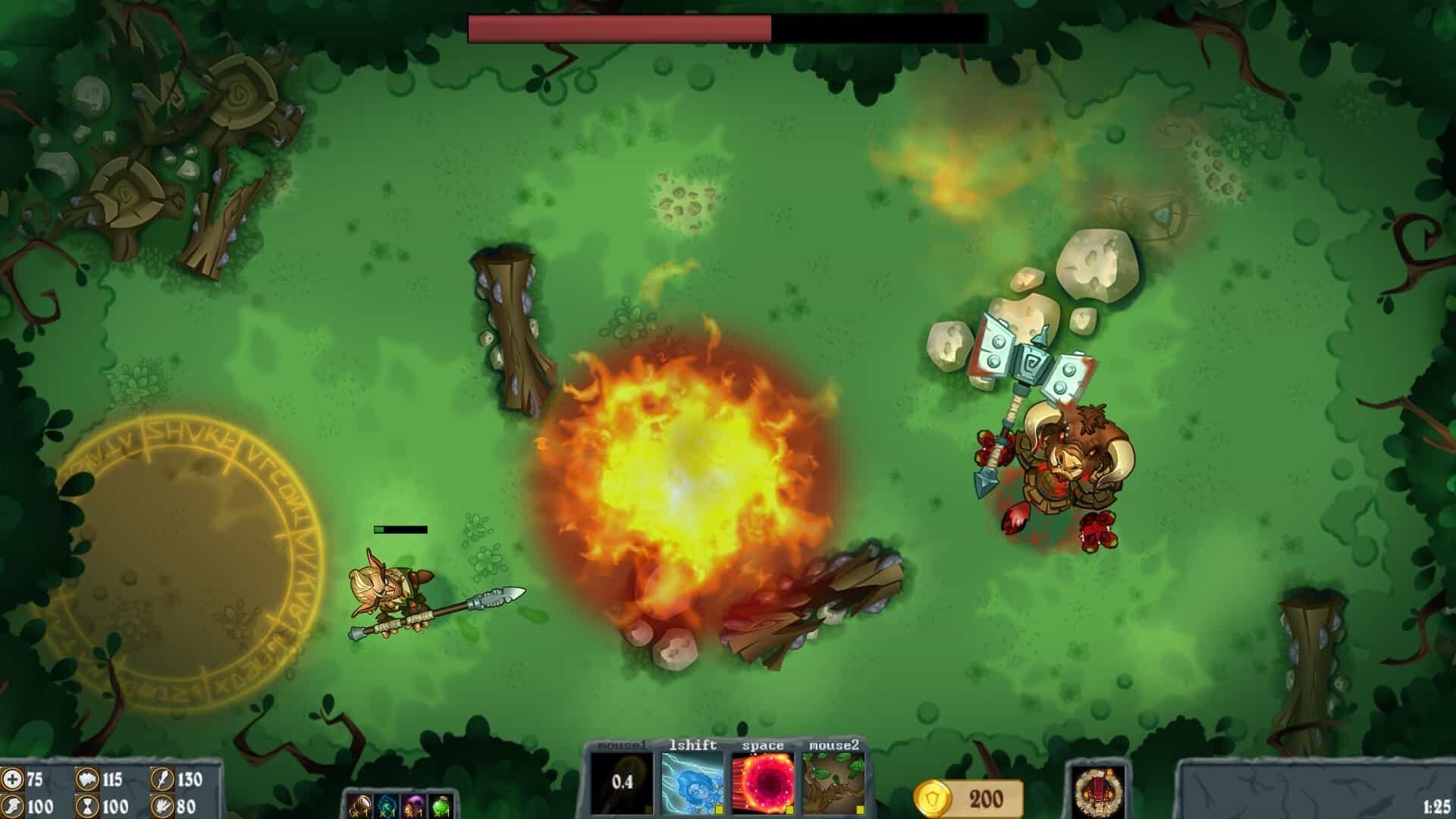 Adding to the casual vibe: individual runs go quickly. Do well, and you can beat the game in an hour. Do poorly – and you probably will more often than not – and you can get yourself killed inside of five minutes.

Despite All My Rage Quitting

You’ll keep coming back, though, because Flamebreak is compulsive. It’s built into the system. Besides the possibility of waiting for the random character generator to finally give you that perfect set of skills, there are also new character races, weapons and powers unlocked regularly the more you play.

Best of all? It’s single-player, so there are no teammates to get mad at you when you rage-quit.

Flamebreak is available via Steam.

Watch the trailer for Flamebreak below:

2 thoughts on “Review – Flamebreak, a Roguelike MOBA-like from Nimbly Games” 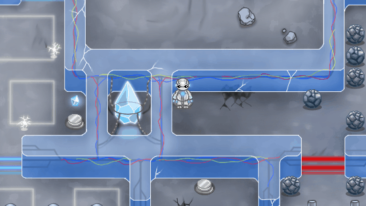 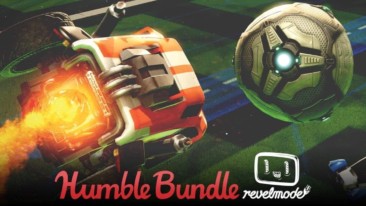