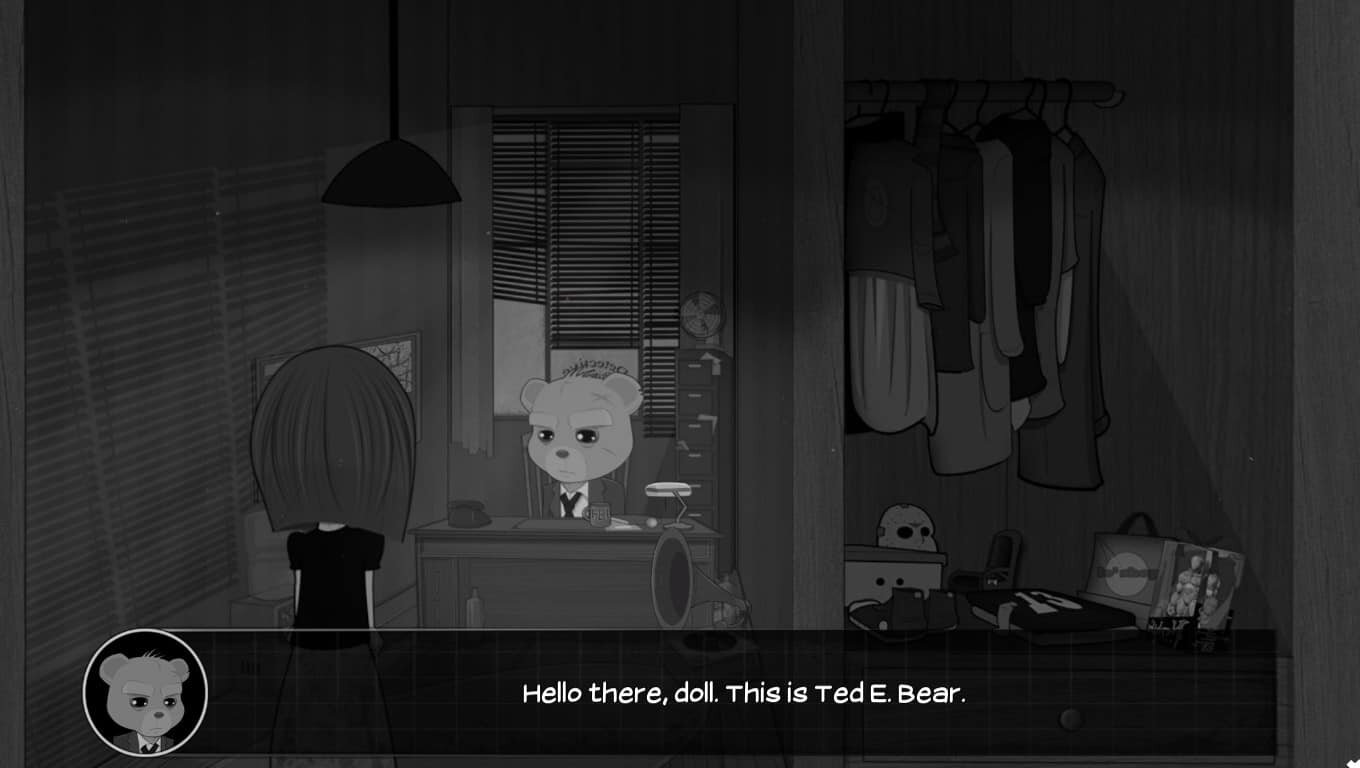 Bear With Me – What We Think:

It was sudden when Amber awoke from a nightmare, discovering her little brother, Flint, was missing. With some hesitation, she sauntered into retired detective Ted E. Bear’s office (which happened to be her closet), asking for his help. After a little pleading, the grouchy Ted agreed to accompany Amber on her investigation. Little did they know, one titled the “Red Man” has been starting dangerous fires all around Paper City and searching high and low for innocent little Amber. Thus began the entertaining, yet at times spooky, journey of Bear with Me.

Developed by Exordium Games, Bear with Me is a point-and-click episodic noir adventure that conveys a mixture of sarcasm and horror. One minute, the setting will emit a serious tone, and the next, Ted is mumbling some sarcastic comment in his deep grizzly voice. Undoubtedly, the moods mesh perfectly, especially since Amber and Ted’s personalities are one of a kind.

It’s no doubt that they are a dynamic duo, and of course it is up to them to seek out clues and question suspicious witnesses skulking around the house. Furthermore, only a mere handful of characters are introduced in the first chapter, but they correspond naturally with the setting and are substantial to the core plot. Plus, they’re all kind of adorable in their own way. 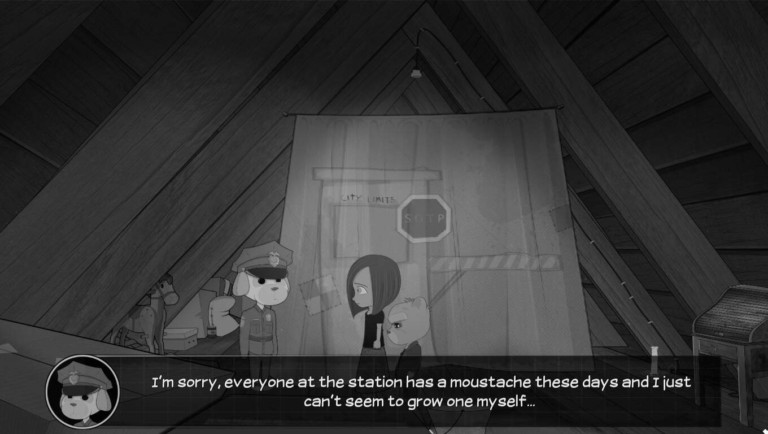 Portrayed in black and white, the 2D environments are simplistic yet stunning. Not to mention the atmosphere is as alluring as it is haunting. Almost every item in each room can be examined, and Amber or Ted will add their own sarcastic commentary describing said object. It’s pretty great.

Granted, key items can be easily missed. Surprise – I learned this the hard way. You know, after spending 20 minutes clicking on every inanimate object yet somehow missing the most important one. Whatever.

Considering key items don’t typically stand out, closely examining a room’s layout is vital, as well as clicking on each object Amber stumbles across. Yes, even the soggy cereal. You never know. Chatting with good ol’ Teddy will also ignite a minor hint as to where Amber should be focusing her attention. Not to mention, his puns are so bad that they’re comical, or dare I say…punny.

Bear with Me is a head-scratcher, but thankfully Ted is able to guide Amber in the right direction. 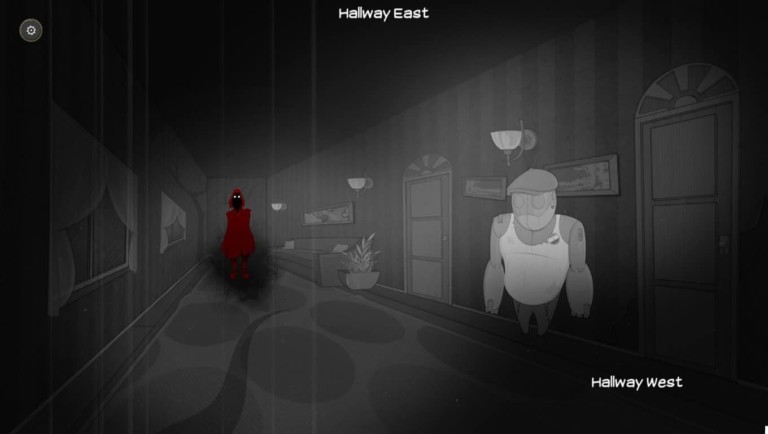 As soon as key items are obtained, they are placed in Amber’s inventory. A variety of these odds and ends must be merged in order to reveal components of the story. Truth be told, the combinations appear so simple yet take embarrassingly long to figure out. At one point, I even attempted to combine a sword and a mysterious red cloth. Desperate times call for desperate measures. Amber, of course, retorted at me with an, “Are you even trying?”

Yes, Amber. Give a girl a break.

Once that light bulb flickered on, progressing onward never felt so rewarding. Exposing significant clues as to why Flint has disappeared is the main objective, but dialogue choices also come into play. With that stated, the entirety of Bear with Me is nonlinear, even if it isn’t apparent at first. Without giving away any core details, recognizing this early on probably would have saved Amber and I some heartache, but we will get through this hard time. 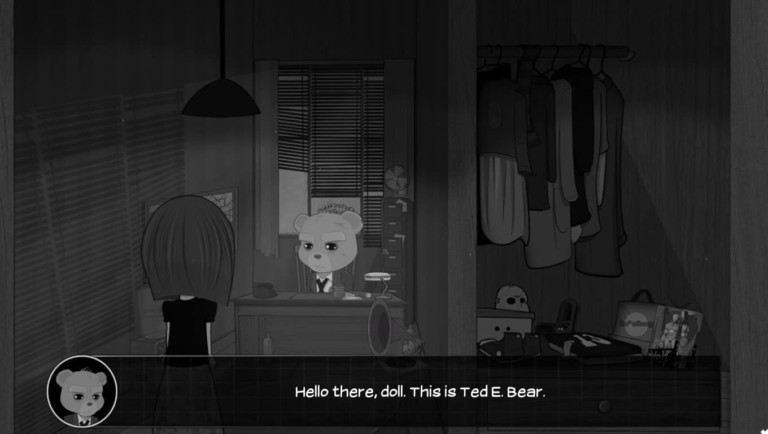 Though the first episode of Bear with Me is considerably short in length, it does not lack in quality. Sure, some of the puzzles can be maddening. Yeah, I waved that white flag in surrender a couple of times, but Amber and Ted E. Bear are so quirky and mysterious that continuing onward with them only seemed right. Numerous elements of the story are still a tad blurry, but it’s the not knowing part that grasps my attention. Venturing into Paper City blindly can only lead to one thing – chaos, especially if the Red Man is lurking around every corner. Surely, it isn’t anything Amber and Ted can’t…bear.

Bear with Me is available via Steam.

Watch the official trailer for Bear with Me below: 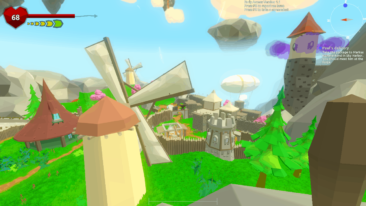 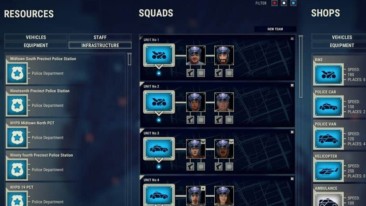