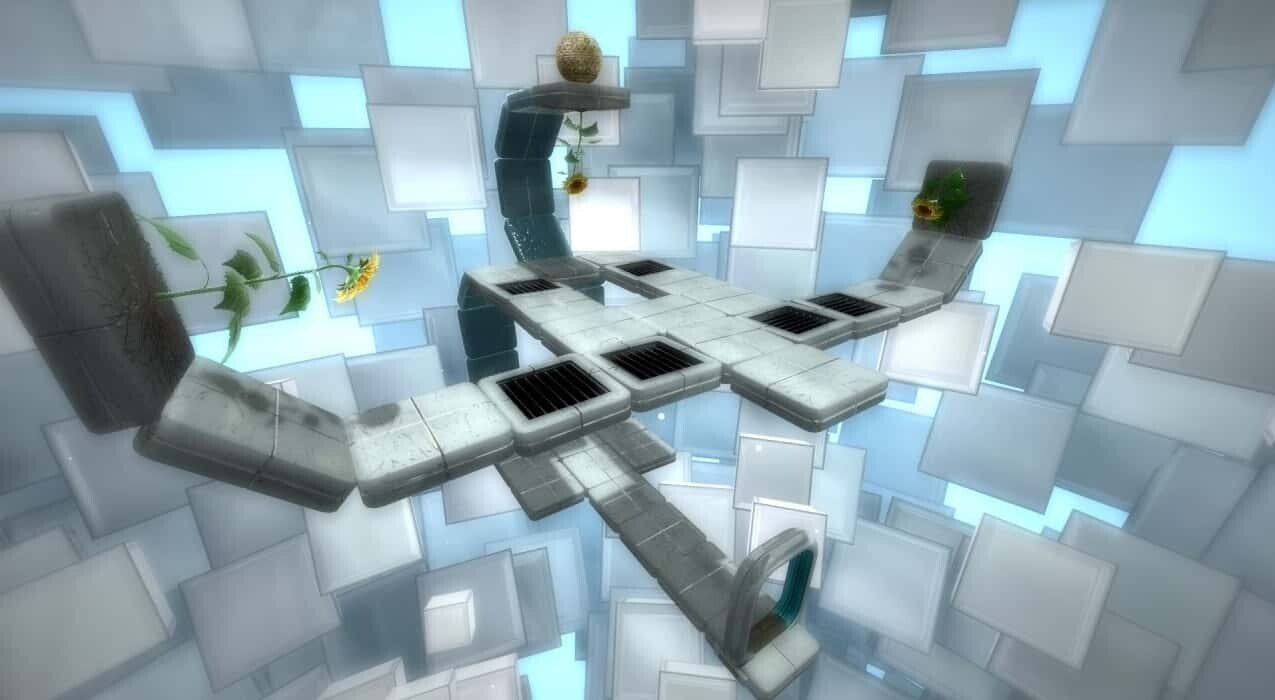 Puzzle Dimension – What We Think:

Easy to pick up, but difficult to master, Puzzle Dimension turns physics upside down, and challenges you to do the same with your thinking. The controls are simple: You guide a sphere of unknown arcane origins through various courses, one tile at a time. You must roll over all of the sunflowers in a stage to open the exit gate. Use the arrow keys or game controller to move the ball in a direction one square at a time. By hitting the space or controller button, you can leap over a tile. Fall off the course by rolling or leaping to an empty space, and you’ll fall to your doom. Worse yet, you’ll have to start the course again.

What isn’t simple: Puzzle Paradise packs a wealth of booster and trap tiles. Roll onto an ice tile, and you’ll continue to roll until you reach a non-ice tile (often depositing you over the side of the puzzle). Hit a springboard tile and you’ll be propelled over the adjacent two tiles. Various one-pass tiles exist. These will allow you to roll over them once, but will activate a death trap (such as fire pits, or crumbling tiles) that will destroy your sphere should you try to pass a second time. Switch tiles will reveal invisible tiles, and hide others.

A Land Down Under

Is that a sunflower I see growing under the course? The gravity system is one of the most daunting elements in Puzzle Dimension. Should you find yourself rolling up a steep incline, your instincts would tell you that rolling off to one side would bring you back to where the incline began. Such is not the case. Look to whatever tile is immediately beneath you, and you’ve found down. Some of the trickier puzzles will require the player to make a plane-based leap of faith to gain access to parts of the levels.

Puzzle Dimension staggers the difficulty of the stages within each puzzle cluster. You’ll breeze through a handful of levels that present a new trap or boost mechanic, only to find yourself scratching your head as you watch your sphere plummet into the abyss for the umpteenth time on another level. Very often, there is only one path through these puzzles, and finding it is a case of trial and error. If you’re fortunate enough to have amassed enough points to have opened up another puzzle cluster, try clearing your head by breezing through some easier puzzles there.

Sometimes a fresh approach is best, and the frustration you’ll feel with some of the levels will be trumped only by the “Ah HA!” moment you’ll experience when you finally stumble upon the solution. You can also unlock additional level skins. This only changes the look and feel of the levels, but in a game where perspective is so vital, it’s fitting that something as simple as changing the look of a level can change how you look at it.

Like many games I’ve played of late, Puzzle Dimension rocks out to an 8-bit soundtrack. While it is very well done (as an arcade title sound palette might require) in contrast with the high quality visuals feels anachronistic, and rather than cow to the trend, the devs should have worked more towards matching the audio with their visual artistic vision.

The visuals really pop, setting each stage atop a bizarre ethereal backdrop. At the start of each level, the tiles and flowers all appear heavily pixelated (3D Dot Heroes comes to mind) but crack open into hi-definition visuals as you approach. The ability to unlock skins will keep things looking fresh should you come back to unlock the game’s 21 achievements. It all comes together to blend current gen and retro, but I wasn’t completely sold on the overall feel. Puzzle addicts, beware: You will get sucked into this game. Getting close to solving a nightmare stage, only to roll off the side a few steps from the exit will frustrate some, but spur on others. It’s also presented in a relaxed enough fashion that anyone can drop in to play a few relaxed stages. Though there is no time limit, there are bonuses and achievements to be had for a quick completion of a stage.

If you’ve been craving a decent puzzle game or just jonesing to flip Isaac Newton the bird, you’ll want to get your head around Puzzle Dimension.