Old Friends Back From the Dead

In the near future we’ll be seeing a number of sequels to game franchises that we haven’t heard from in many years. No, I’m not talking Duke Nukem Forever. I think we’ve all stopped holding our breath on that one.

So this one was announced in 2007 but the shiny new trailer from the good folks at Square Enix has got old fans and potential new fans alike salivating. If there’s a first-person-shooter franchise that’s been in dire need of a revival, this is it.

Ultima Underworld and System Shock were the FPS/RPG hybrid genre in its infancy, but I’d mark Deus Ex as the point it came to maturity. The combination of character modification, stealth, hacking, lock picking, etc. can be seen as a template for many of the successful titles of the past few years. Now that Square Enix is on board, I for one can’t wait to see the results.

Who saw this one coming? It’s been more than a decade since we saw part 2. Looks like the popularity of Street Fighter IV means we’ll see more of our favorite 2D fighters make their way back into our lives. You wont hear me complain. Though it looks like all the SF IV piracy on the PC has made Capcom gun-shy about releasing this style of game on the platform. It’s a shame.

I knew a few people who owned a Nintendo 64 for the sole purpose of playing the original and I imagine a lot of you spent endless hours playing and talking about this one back in the day, so as long as the newly announced re-imagining for the Wii sticks to what made it’s progenitor great, how can they go wrong?

We haven’t seem much from the big ape, other than rhythm games, on a console in a long time. It’ll be good to see him get back into the swing of things. See what I did there? No … it wasn’t particularly funny. Leave me alone.

A lot of non-fantasy MMOs are on their way, all threatening to drain my bank account on a monthly basis. Sure there were a ton of fantasy based games too, but let’s face it, the only game that will come close to slaying the WoW dragon will likely have a 2 after it and come from Blizzard. Many other MMO genres have great games, but none possess that killer title.

Being the second Star Wars MMO can have its complications. With all the awkward fumbling and missteps involved in Star Wars Galaxies there are sure to be a lot of people gun-shy about investing their time and money again, but the new trailer cemented for me that Bioware has the right idea. I’ve had a few discussions on whether the release of SW:OR will sign SWG’s death warrant. I guess we wont have long before we’ll have our answer.

In all my time playing MMOs, whenever the subject inevitably turned to moving on to a different game, my answer was “If they had a 40k MMO I’d be done looking”. Well soon it’ll be time for me see if that’s true. The trailer has my hopes up but real details are still sketchy.

The superhero sub-genre has already seen two titles from Cryptic Studios do relatively well, but now, for the first time, we’ll see how a title does with a major franchise behind it.

Will people be satisfied with a DC game where they can meet Batman, but not BE Batman? It’s an interesting issue for a developer to have.

Everyone may not have been plugging a new console, but there was plenty of new gear to see. They all might be seen as falling into the gimmick category, but after the success of the Wii and the Wii Fit who can argue with a gimmick?

Playing without the need for any controller at all in your hand? Interesting. A control system that requires me to stand to do anything? Not cool. Let’s hope they shake the sort of issues people at E3 were complaining about out before release.

It still just looks like the Sony version of the Wii remotes with bizarre glowing spheres on top. With both this and the Kinect, it will come down to two things. First and foremost, will the games live up to the gear? Second, will people be willing to place their cash on the gimmick alone when it isn’t an integral part of the console?

No more iterations of the DS, except … well, doesn’t this just seem like a new iteration? It looks like a DS, plays like a DS, and is reverse compatible with DS games. We’ve all seen the product demo for 3D games on the DSi, so what’s really being improved here? I guess the DS is long overdue for power boost, so I don’t think you’ll hear a lot of complaints. Any 3D gaming that doesn’t involve me shelling out a ton of money for a new TV/Monitor is OK in my books too.

It’s definitely smaller. The hardware architecture is supposed to prevent the red ring of death (Which is gone anyway. Red rings were bad PR so now it’ll flash green if it dies). From all accounts it seems to be slightly quicker than the elite. The memory units are no long supported, but it sports two front USB ports for game saves. No more external hard drive, but the hard drive is still removable via a slide out compartment. Built in Wi-Fi is a great addition. Whisper quiet with less power consumption too.  All-in-all a good update to an aging console.

Yes it get’s its own category. It’s about the only quasi-indie thing I want to talk about. With a concept and development team responsible for Narbacular Drop, Valve built a very indie game from the resources from Half-Life 2 for inclusion in the Orange Box, but this was one interesting little experiment that demanded attention. It was hailed as one of the most innovative games of 2007 for its unique gameplay and quirky storyline. Now, three years later, we’re looking forward to a sequel with a bigger budget, larger team, and hopefully all the fun, of the original. I’m sure you’re all like me and look forward to a longer experience too. Bring it on GLaDOS!

OK, everything couldn’t have its own category. So sue me.

Post-Apocalyptic setting, first person shooter and driving game,and big mutants. Anyone remember a little game called Redline more than a decade ago? This gives me the same vibe, and I like it! I can’t wait to see more.

For a game with that title, every demo I’ve seen was more about all the cool things you could do OTHER than shoot bullets, but hey, they are VERY cool things.

There might be an interesting plot to this game, but I’m pretty sure I don’t care. As long as it stays the fast paced madcap game I’ve seen so far, sign me up.

What’s to be said? It’s one of the last and best turn-base-strategy games on the market. Like all its predecessors the graphics are improved, old things are gone, new things are in, new play mechanics change the way you play. Either you love the franchise, or you don’t. I know I’ll be getting myself a copy.

IndieCade held aloft the torch for the independent developers at E3 with its IndieCade Showcase shining the spotlight on twelve daring new voices selected from its call for submissions for the big show.

With gorgeous music that can only be described as Silverlake hipster Zen, NYC developer Marc ten Bosh showed this four dimensional puzzle game set in a sprawling Japanese garden. Unfortunately there is no release date set.

Miegakure is a platform game where you explore the fourth dimension to solve puzzles.

There is no trick; the game is entirely designed and programmed in 4D. Because humans can only see and move along three spatial dimensions, pressing a button allows to “swap” one regular dimension with the fourth, invisible dimension. The protagonist can use this ability to see inside closed objects, walk through walls, move objects from one dimension to another, hide under 3D shadows of 4D objects, and more.

What about you?  What excited or disappointed you at E3 2010? Be sure to drop a comment below. 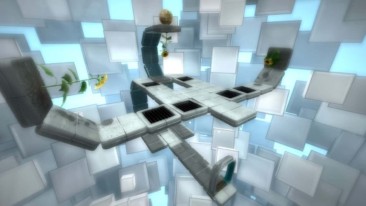 Review: Puzzle Dimension – A Balls to the Wall Puzzle Game by Doctor Entertainment