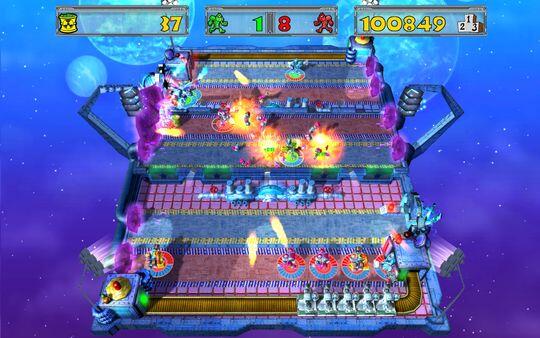 Power of Defense provides a new strategy and defense mix game experience. Defend your world from upoming evil and oil-smelling robots. They come from the platform between both parallel universes you have to fight on by producing own robots to send them back to their native world. You as the last hero on earth and the only one your government could find (and pay), only you can save the world.

The use of the word defense in the title of this game is a bit of a misnomer. Sure, it can easily be considered a close cousin of tower defense games, but with the emphasis changed from protecting an area to pumping out wave after wave of robots the title should probably be Power of Offense.

Gameplay is very straightforward. A little factory regularly pumps out stock robots for you and they collect on your assembly line. You can then spend energy to give the robots weapons or other items and send them out on the conveyor belt. Rolling along the conveyor, your ‘bots will pass alongside the opposing robots on their conveyor and blast away at each other. You can also spend energy to upgrade the quality of the items used by the robots. The first person to have ten of their robots get to the teleporter at the end of the belt wins. Like most tower defense style games, it’s pretty entertaining in short bursts, but becomes very repetitive, very quickly. Every level of the campaign adds new robot types for you to send out, but it seems the best strategy is to stick to the first couple of basic ‘bots and send them out in large groups. There isn’t much for you to do other than sit back and wait till enough units have built up on you assembly line and then send them out again.

Graphically, the game is very rough. The opening splash screen looks like something doodled in an hour, the characters that pop up during play look like they got another half hour of polish. The robots and level design are a relatively crude, but affective 3D pre-render. Animation, while limited, is done well. The story is, well, incomprehensible. There’s some sort of battle going on between robots and humans, but reading the dialog between the two sides is so painful I skipped it more often than not. It is incredibly stilted and full of spelling and grammatical errors. I know you start off on your world, then go to the robot world, then to Hell, but I’ll be damned if I know why. I certainly haven’t heard people called a sissy this often since 4th grade.

What’s worse, the text comes out in old teletype style, accompanied by the most annoying sound ever to be rendered in a video game. In the version I played, I also encountered a bug wherein the scripted text starts the moment the last set is finished, making characters talk over each other and the ends of sentences disappear before you can read them. What it boils down to is this: if you like the passive nature of tower defense games, you might enjoy Power of Defense. There may be a lot of options, but they tend to be a waste of time compared to a cheap bulk offensive, so if you’re looking for deep strategy, this game isn’t it. If story is an important part of your gaming experience, look elsewhere. If it isn’t, be prepared to press the close button a lot to skip the poor attempt at it. Still, as a casual time killer, it has its moments.

Purchase Power of Defense for Windows, Mac, or at Steam, D2D or Gamersgate