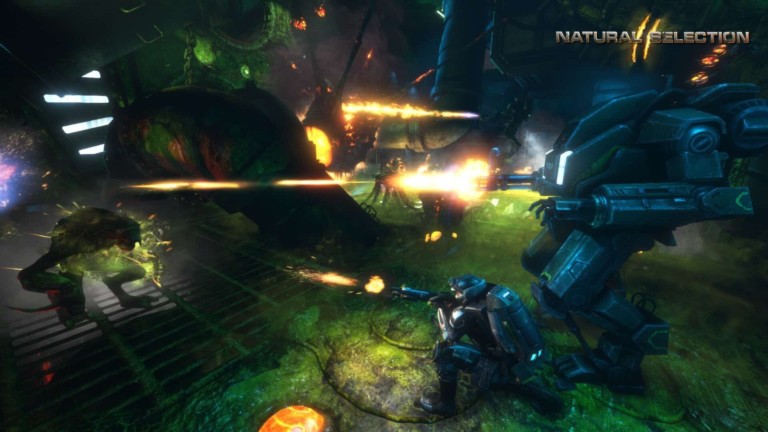 Some of us original Half-Life players remember the golden days in our youth when the won servers were still up and the modifications in Half-Life were many and rich with detail. Natural Selection was one of those modifications that many look back on and remember playing over and over and always left wanting more. The original modification was designed by Charlie Cleveland who went on to create Unknown Worlds Entertainment.  Even now a small community keeps this modification alive. Which this all brings us to Natural Selection 2 – the result of the GoldSrc engine becoming quickly outdated, leaving most wanting more from the original Natural Selection – better graphics, game play improvements and other things that the GoldSrc engine couldn’t support. Unknown Worlds Entertainment settled on making an engine that would not only improve and build upon all the player requests, but also added features that the original players didn’t dream possible, like an easy way for a simple player to make great 3D maps for the game in a quick and easy manner.

With this engine they wanted to make the game not only look good and be easily modifiable, they wanted to make it run off of medium to low end gaming machines so that everyone could enjoy it, even if they didn’t have enough money to upgrade to the latest and greatest hardware within the last few years.

On November 18th, 2010, they announced they were in the closed beta phase of Natural Selection 2 available to those who pre-ordered. As a lover of the old Natural Selection mod back in my youth, I must say I am glad that they allowed me to preview this game.

The graphics system is great. I can play the game on high quality settings and still manage to get 30-60 frames per second on my laptop’s Nvidia GTS 360M. The graphics so far mix well with the atmosphere that is created by the game. A marine walking down a long hall, not knowing if a skulk is about to drop on to your head or turn the corner and rush you creates a tension in the game that is amazing and the graphics really complement that. It’s breathtaking when a stream of fire shoots towards you when you’re a lerk, flying around free, barely dodging attacks that look magnificent, hiding up in the rafters, waiting for the perfect time to gas the squad of marines setting up a base. As for the gameplay, right now the bad part is that the game lags up a bit sometimes and this can really crush the flow of things, for example when you are about to shoot a gas bomb, the game freezes up, and suddenly you notice the marine has moved completely across the room. Makes for some very irking deaths sometimes.  Despite this present sort of potential for crunchy lag, it is a beta and further optimization will make a good thing great – but I want to reiterate that the game does play very well for the most part.

Most sessions I ended up playing were very close, where only a small element such as a small room with a node was able to turn the tide of the game.

On the site there are 10,000 closed beta slots available. Find out more or pre-order the Natural Selection2 Beta now

iOS Game Review – Tap Tap Bar: Time To Admit You Have a Problem

Kingdom of Loathing Wants to Kiss and Makeup