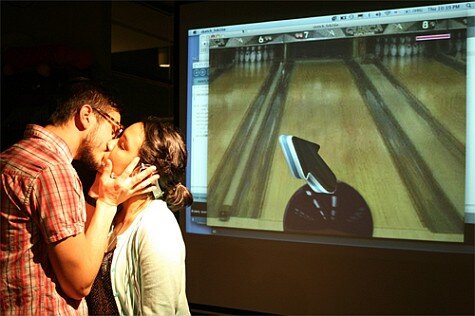 Saturday, October 8th, 2011 – Culver City, California — Today we spent less time in the conference rooms and more time checking out the games on display around the various locations in Culver City. It was great to see developer Jesse Vigil sitting at a table with several guests playing a round of his paper-and-dice board game Application Crunch that makes the process of applying to and deciding which College to attend into a parlor game. Application Crunch looks very well organized, complex and professionally printed and coming from a mind like Jesse’s we are sure it is not only fun, but richly developed; at least the expressions on the players’ faces told us so.

Moving into the tech-space, we watched ten or so players wielding Playstation Move Controllers engage in a “Big Game” of Johann Sebastian Joust that has a software component though none of the players ever needed to glance at it; instead, they faced off, attempting to tap their opponent’s controller while minimizing the movement of their own. Players ranged in age from 10 to upper 40’s and all seemed very cognizant of the “simple yet elegant” ruleset, and to be having a good time.

In case the above description doesn’t quite get the jist of the joust across, here is a sample video from the developer’s site:

Continuing with the physically-driven interactive media offerings, we just had to stop by the Kiss Controller booth where two players are meant to kiss, using their tongues to control a variety of games including a car on a track or a bowling ball down an alley. Developed by Hye Yeon Nam and Sam Mendenhall, the controls consist of one player wearing a rubber headband with two sensors that rest on either side of the mouth, and the other player using a sticky powder (Fixodent) and a tiny magnet that they glue to their tongue to steer.

While provocative, and perhaps even sexy on paper, in practice it was very difficult to actually control anything on the screen (I was fortunate enough to test this out with fellow IGR staffer ZombieGrl), perhaps because the input medium is too volatile in spite of its apparent simplicity. Would love to see this develop further, but for the time being, it is just out of the theoretical phase.

Next we looked at Kaleidoplay (Play Kalei) from from Korean developers LoadComplete for the iPad and other iOS devices, (though iPad would be the preferred device according the developer on hand.) This slick-looking title pits two players against one another to pinpoint the exact location on a photograph (custom photographs can be used) that matches the center of a kaleidoscopic circle in the center top of the screen. Simple, yet effective and beautifully rendered. A port for Android is in the works.

The last game we got to check out was one about which we are also perhaps most excited. Gamestar Mechanic is a game that leads to the creation of an actual functioning game that the player-turned-developer can then distribute to their friends. The easiest way to summarize it is that you start of as a player in a game, going through the process of playing games, learning about them and trying to beat them, until you hit a wall, and have to find a solution for it. Going up in levels unlocks new abilities (there are also Freemium options to crack open some real power tools though they are not, ultimately necessary to go all the way to the completion of your own game). The developers wanted to explore a new way of teaching game development by implementing a “through” approach as opposed to a “from-the-top” teaching methodology. We love it. And don’t let the Freemium part scare you away; the dev assured us that there are many players who have been with them since Alpha who have created many games without ever having paid a cent. In essence, the “Premium” features simply afford additional development tools.

We managed to shoot video with all of the above and look forward to bringing you some gameplay clips and developer interviews. For the time being we wanted to get you the latest scoop as soon as we could. In just a few hours, we head back out for the final day of IndieCade 2011 and a report on the Developer’s and Audience Choice Award winners. 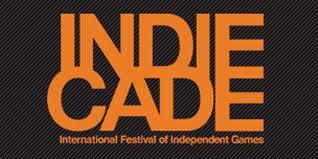 The Official IndieCade 2011 Award Winners in All Categories