Louie is a classic platforming title featuring a combination of tricky jumping challenges and the occasional brain teaser.

This comes alongside a lighthearted story set on an island fortress straight out of the traditional “evil mastermind’s hidden base” trope. Packed with a fully-featured level editor, Louie has considerable replay potential.

We All Scream for Ice Cream

The story of Louie is delivered in a lengthy text introduction at the outset of the game. It’s all very cartoon-mischief; the nefarious Dr. Melt has stolen the world’s ice-cream supply, and it’s up to the titular protagonist, Louie, to recover it.

“Agent” Louie (represented as a white cube with arms and legs) must parachute onto the Doctor’s island fortress and bring a stop to the fiend’s schemes. A short tutorial level introduces the basics. Louie can jump, shoot his energy weapon (which has very finite ammo) and interact with nearby objects, such as switches or hidden doors. The tutorial is blissfully short, and then the proper levels begin.

My first impressions of Louie were that it is a somewhat gentle title targeted at younger audiences. This perception swiftly changed after a couple levels; Louie is surprisingly challenging at times.

Levels tend to focus on jumping challenges coupled with threats from various enemies.

Guards patrol Dr. Melt’s fortress, and there are numerous traps, ranging from spikes to energy turrets firing from ceilings or walls.

The stages are broken up into sections locked behind color-coded doors that require keys to progress. Pretty conventional design, but built well and packing some tough puzzles to break up the action. 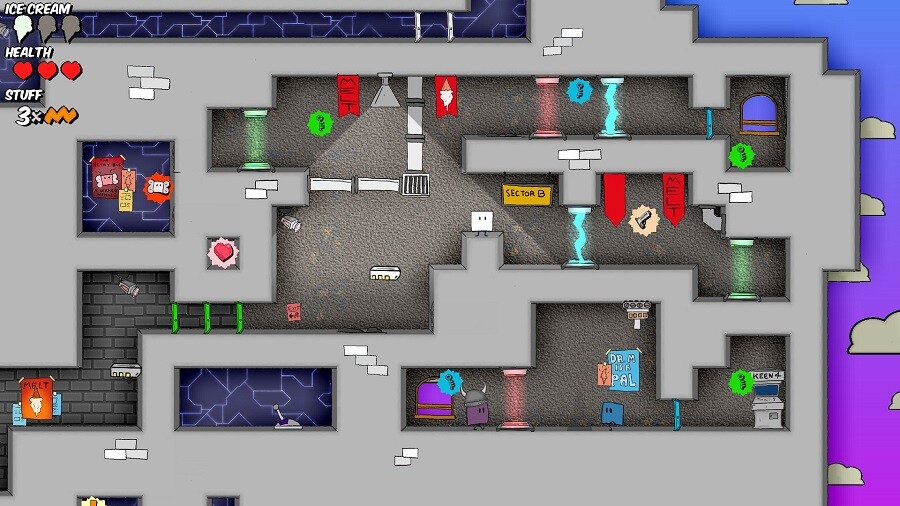 Some levels feature teleporters that operate similarly to Portals from Valve’s classic. These can make for some interesting puzzles that can easily catch you off-guard, as enemies can pass through the teleporters too.

All in all, the action is well-designed, and the game controls well enough, although I do feel it could be a little more pacey.

Each level features secrets, and this provides a little replay value. Some of these hide neat little references to other games, such as the lambda symbol from Half-Life next to a crashed tram.

In addition to this, the game features a level editor to extend replay value further. It seems to be a well-put-together tool, and indeed, the developer used it to create Louie’s levels. Oh Baby, Me Got to Go Now

The visuals of Louie are fine but not exceptional. The chosen aesthetic is a tad well-trodden but it works well, and many environmental features have short animations to reinforce the cartoon-themed style.

The music is perhaps a little overzealous but it certainly reinforces the overall feel of the game well enough and establishes a distinct personality.

Louie is a strange combination of a disarmingly quaint story and aesthetic coupled with surprisingly difficult level design. Some of the stages can be tricky, and failure puts you back at the start of the given level.

Louie’s chosen style isn’t for everyone but players looking for a solid platforming or puzzle challenge will find something worth their while here.

Louie is available via Steam.

Check out the official trailer for Louie below: 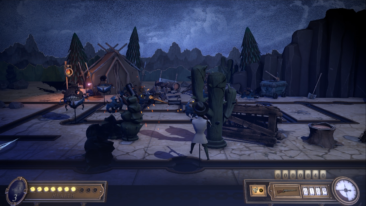