There are so few Kindle Games at the time of this writing that you can still count them in the time it takes to boil water for tea, but already there is an intrepid developer who appears to understand how to make the most of this emergent medium for diversion. With the launch of his second game Panda Poet

, Spry Fox, the former Microsoft programmer has cemented that his first offering Triple Town was not a fluke. Triple Town has received almost perfect marks from the Amazon/Kindle community for offering something refreshing, intriguing and appropriate for the slow refresh / monochromatic platform that is the Kindle platform for gaming.

Triple Town is an original puzzle strategy game in which you try to grow the greatest possible city. The larger the city you build, the more points you score. You build your city by matching three or more game-pieces: combine three grasses to make a flower, three flowers to make a bush, three bushes to make a tree… until you’ve filled the board with houses, cathedrals and castles. Along the way, you’ll have to outwit evil barbarians and wizards who will try to block your progress.

This is a game that can be played for minutes or hours at a time. You’ll have to think several turns ahead if you want to avoid inevitable gridlock as unfinished buildings, barbarians and wizards start to pile up. And sometimes, if you’re lucky, you’ll be helped along by a magical crystal (which combines with anything) or a powerful bomb (which wipes nuisances off the board). But luck won’t save you forever!

How large can you grow your dream city before the board fills and the game ends?

You know, Kindle users probably aren’t expecting much more than some X’s and O’s or Solitaire when they lay back on their pillow and nuzzle up with their favorite non-glare, non-backlit device to fall gently to sleep, which is what makes Triple Town so much more of an acheivement; to invent a non-violent, slow refresh game that fits perfectly within the demographic and platform while bringing something fresh to the table.

Triple Town brings a sort of time management / tower defense concept to the Kindle but for casual gamers of a unique kind. Combos lead to upgraded items and upgraded items themselves can be further pushed up the ladder of relevance by matching them up and building increasingly more valuable “towns” which, logically, and strategically invite more barbarians and dark wizards. It’s a fairly simple concept, but highly addictive and beautifully executed.

In fact, we found ourselves reaching for TT over the Steam login on many occasions. The game is bug free, logical, challenging and filled with personality. What at first seems like a casual affair quickly becomes a real effort in space management and forward thinking as squares fill up and those nefarious little devils start to saturate the available move options.

With a contemporary look and innovative gameplay, we are very happy to have Spry Fox devoting its energy to the platform and can only give their releases the highest accolades thus far. This is a sure bet for your Kindle in the quiet hours or while on the road, or needing a break from Tolstoy. 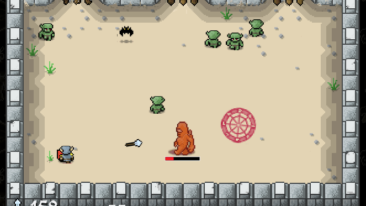 Full Game Review – Mark Leung: Revenge of the Bitch where nothing is sacred