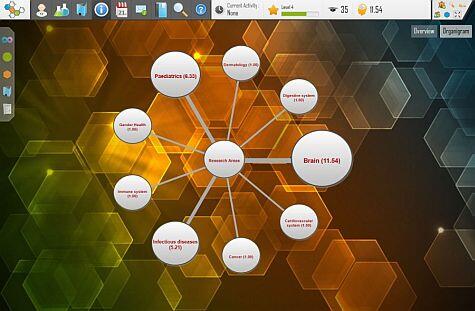 February 23, 2011 – “Power of Research”, a free strategic browser game is now officially launched and gives players for the first time the opportunity to slip into the role of a researcher. The game is now available on www.powerofresearch.eu for free and neither installation nor prior knowledge is necessary. In “Power of Research” players can engage in “virtual” health research projects, by performing microscopy, protein isolation and DNA experiments, publishing research results, participating in conferences, managing high tech equipment and staff or request funding – all tasks of real researchers. The decisive game elements are communication, collaboration and competition: players can compete against each other in real time or collaborate to become a successful virtual researcher, win scientific awards or become the leader of a research institute.

The game is funded by the European Union through the 7th Framework Programme for research and is aimed at bringing young people from all over Europe closer to real science on the one hand, and to present possible scientific careers in a comprehensible and tangible way on the other hand. Apart from up to date scientific content in a virtual library and real scientific images, the players will also get a better understanding of European research institutes and universities. “Power of Research” is already supported by five Nobel Prize winners and several international renowned researchers. After 3 years of development lead developer and owner of TPM Games Ltd. Tim Preuster, who already received several awards for his successful politic game powerofpolitics.com, expects an overall positive response. The innovative interface of the game and the challenging gameplay will ensure a fast growing player-community, which will be able to break language barriers and bring Europe closer together.

Iris Grünert, project coordinator and business manager of biolution, expects the same high impact. She thinks that the unique concept, to which she clearly contributed, marked an important milestone within science communication. Due to her experience and former activities in the scientific field, she knows how to succeed in communicating important scientific content in such an exciting and entertaining way that the fun factor doesn’t get lost when dealing with complex biomedical topics.

Based on the innovative computer game combined with high quality information flow, which also drew the attention and support of various European research institutes and renowned scientists, “Power of Research” is an entertaining way of experiencing modern science.

Statements:
“Power of Research is important because it engages young minds. Science is engagement, engagement of the mind and the hands.”
Mario Capecchi, Nobel Prize winner, 2007

“Europe will need by 2020 one million more researchers than we have now. Power of research can help attract young people to science by showing them the immense opportunities it can offer, both in career terms and for society as a whole.”
Máire Geoghegan-Quinn, EU Commissioner for Research, Innovation and Science, 2011

Play Power of Research free via the Official Site