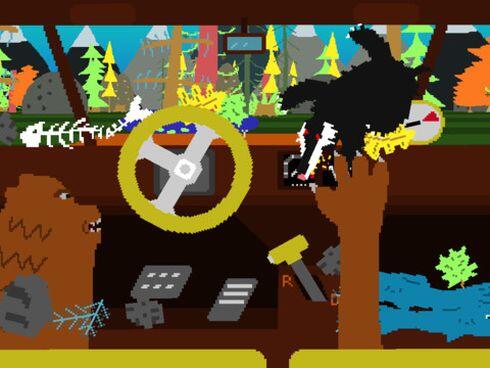 Winter is coming. In fact, it’s coming in roughly five minutes. Too bad you’ve spent every minute up to now being lazy and generally NOT preparing for hibernation. You now have only one option: jump in a beat up old muscle car and drive through the forest to gather enough resources to sleep through the winter safely.

Using the mouse, you move the bear’s right arm around the car. This is the only interface you have with the vehicle and clicking and dragging is how you will manipulate the various features in the car. The trick is that you can only perform one action at a time.

Once you’ve acquired food (find fish by driving through a pond, or berries by driving through berry bushes) it will drop into the cab of your vehicle through the sun roof. To eat the food, click on a morsel and drag it over to the bear’s mouth. For larger fish, you’ll have to drag the fish up and down in front of the bear’s mouth until you’ve stripped off all the meat. You’ll also want to toss the bones out, or your car is going to get cluttered fast. As you nosh, you can keep track of your progress by watching the fuel gauge on the car. Once you hit “full”, you’ll be prompted to hightail it to the nearest cave for nap time.

Of course, it’s not that simple. Forests tend to be dense, filled with various obstacles, and populated with ornery inhabitants. As if scrambling for some last minute vittles using only one bear paw wasn’t hard enough, you’ll be cursing out loud when a wrong turn drops an angry hornet in your vehicle. His sting will force you to let go of whatever it is you’re grabbing. Disrupt a tree stump, and suddenly you have an angry badger to contend with (and sometimes there is more than one).

Not only will badgers get in your way, but they will also eat your food if you don’t get to it fast enough. Each level also packs its own randomly generated obstacle modifier, such as “full moon”, which results in extra-crazed badgers, or “you feel famished!” which means you’ll have to consume more food to fill your tank.

The graphics aren’t great, but they do what needs doing. The whole premise of the game is pretty goofy, so the scaled back visuals actually help sell the concept. You’ve got one looped tune to get your through the entire game, but I’m pleased to report that it is sufficiently jaunty. The physics are the most enjoyable and maddening part of Enviro Bear 2010. If you don’t jettison foreign objects fast enough, they will start obstructing your ability to reach parts of the car, and can even affect the performance.

Driving into some trees will deposit a load of pine-cones into the car, and careening off a boulder will result in large hunks of rock. Either can get under the pedals of the car, making accelerating or braking more difficult, if not impossible. Rocks are a real pain, as they are not easily tossed out of the car, and can land on top of the pedals, making for more speed than you might like. The system has some serious collision detection issues though, and you’ll quite often sail right through large rocks.

Shy on graphics but high on fun. And with the sticker price like “Free” (or 99 cents for the iPhone), you could do a hell of a lot worse.

Get Enviro Bear for Windows Free at Game Jolt

Get Enviro Bear for $0.99 at the iTunes App Store 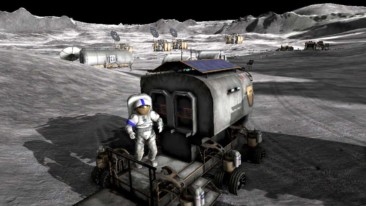