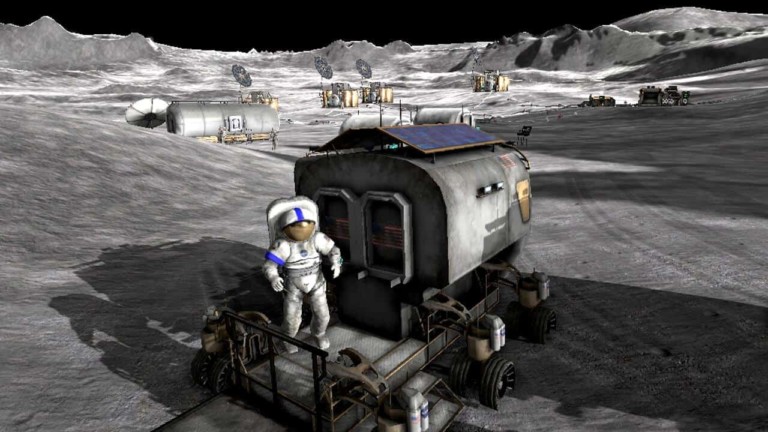 Moonbase Alpha is a NASA-funded multiplayer game scenario with 20 minutes of play set on a hypothetical lunar outpost in 3-D immersive setting. This is a proof of concept to show NASA content – lunar architecture in this case – and a cutting edge game engine could be combined to produce a fun game and inspire interest in STEM education

NASA and The Army Game Studio partner up with Virtual Heroes, a division of Applied Research Associates to develop an engrossing, really nice looking lunar sim on the Unreal 3 Engine leveraged by Valve’s Steam network features to include leaderboards and stats and then give it away for free. If your computer can handle it, we say, Christmas came early.

When The Meteor Hits the Fan…

Moonbase Alpha drops you off at a solar powered research outpost near the moon’s south pole just as a meteorite slams into the surface nearby causing all kinds of havoc on the power and oxygen supply lines. You have twenty-five minutes to assess, repair and restore a variety of damaged components before oxygen supplies to your fellow astronauts trapped inside the base are depleted and all is lost.

In the setup stage, you can choose to join a game, or create your own 1-2, 3-4 or 5-6 player scenario. We were only able to test the two player mode, but presumably a higher number of participants introduces more damaged components to be managed and repairs orchestrated within the timelock.

Don’t Get All Hero On Me

I boldly attempted this alone at first, taking four 25 minutes sessions to finally complete the mission successfully. I quickly realized that having a friend with whom to coordinate the many tasks that need to be completed would have made this a lot simpler, though solid coordination and time management would still be required – two people chasing after the same objectives like five-year-olds all running after the ball in a soccer game would certainly lead to a failure state.

It’s All In the Details

Moonbase alpha is daunting on the first go – as would be expected with a real moon walk, the pace is dreafully slow, an effect exacerbated by the fact that you have a lot of stuff to sort out and repair in very little time.

What I loved about the sim was the attention to detail – there are no shortcuts from reality as the developers are deliberately paying attention to detail; for example when you have to replace a terminally damaged coupler, you first have to use a wrench to remove power lines from either side of it, all of which is eating up precious time.  Then you have to put down the wrench.  Then you have to pick up the old coupler and move it, and then pick up the new coupler and put it in place.  Then connect each power line to either side of the coupler and then pick up the damned wrench again so you can secure the hoses on both sides.

This may sound death-defyingly boring, but in fact it just makes the gameplay more strategic as you learn how to optimize and prioritze tasks in order to get the system pumping oxygen at an efficient enough rate so as not to suffocate the expectant astronauts counting on you inside the lunar base.

When repairing things with your trusty welding tool, you have the opportunity to shave off some time by playing a very simple form of minigame that involves tracing solder points – a game that in itself has a timer.  It seems simple enough at first, but with two clocks ticking and the amount of tracing you have to do increasing in both number and complexity, it can be a real buzzkill to trip up.

The sound design is solid, with a pseudo orchestral, ambient score that plays counterpoint to the increasing tension built up by the seemingly implausible number of articles to attend to.  But there is a solution, and you just have to play through a few times to find it, and once it is grasped, the game’s shortcoming reveals itself: it is just too short.

I suppose it is a testament to the game’s success when its achilles heel is leaving the player wanting more.  Of course, this is more than made up for by the fact that it is absolutely free.

Moonbase Alpha was sufficiently immersive as to make me daydream about actually being on the moon and how effectively I might be able to keep my friends alive. It strongly recalled Sam Rockwell in the indie film Moon going slowly insane from ennui only to discover [spoiler spoiler] and how I might begin to deteriorate in a similar fashion.

All told, it was a worthwhile trip and, if you indeed have the horsepower, one I recommend you check out. 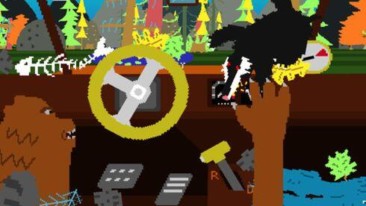 Enviro Bear 2010 – The Fast and the Furriest