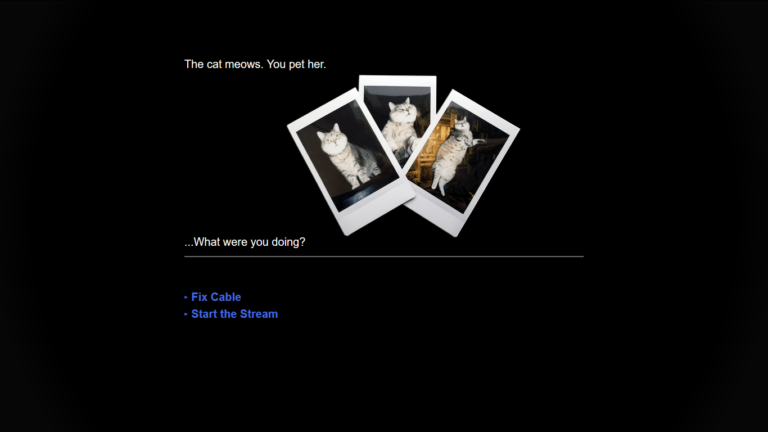 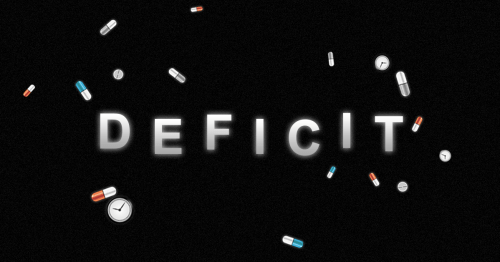 Deficit is a free browser-based game from solo developer Gav Sarafian. Set up as a sort of semi-autobiographical visual novel, it explores the experience of living with ADHD (attention-deficit/hyperactivity disorder) and attempts to convey them to a presumably neurotypical player/reader.

Choose Your Own Sensory Distraction

Sarafian employs a fairly typical interactive fiction approach, delivering the bulk of the information via text (a few mini-games notwithstanding). While the game itself is linear, there are occasional moments of player agency – choosing whom to talk to while feeling overwhelmed at a party, for example – delivered via hyperlinks within the game engine. 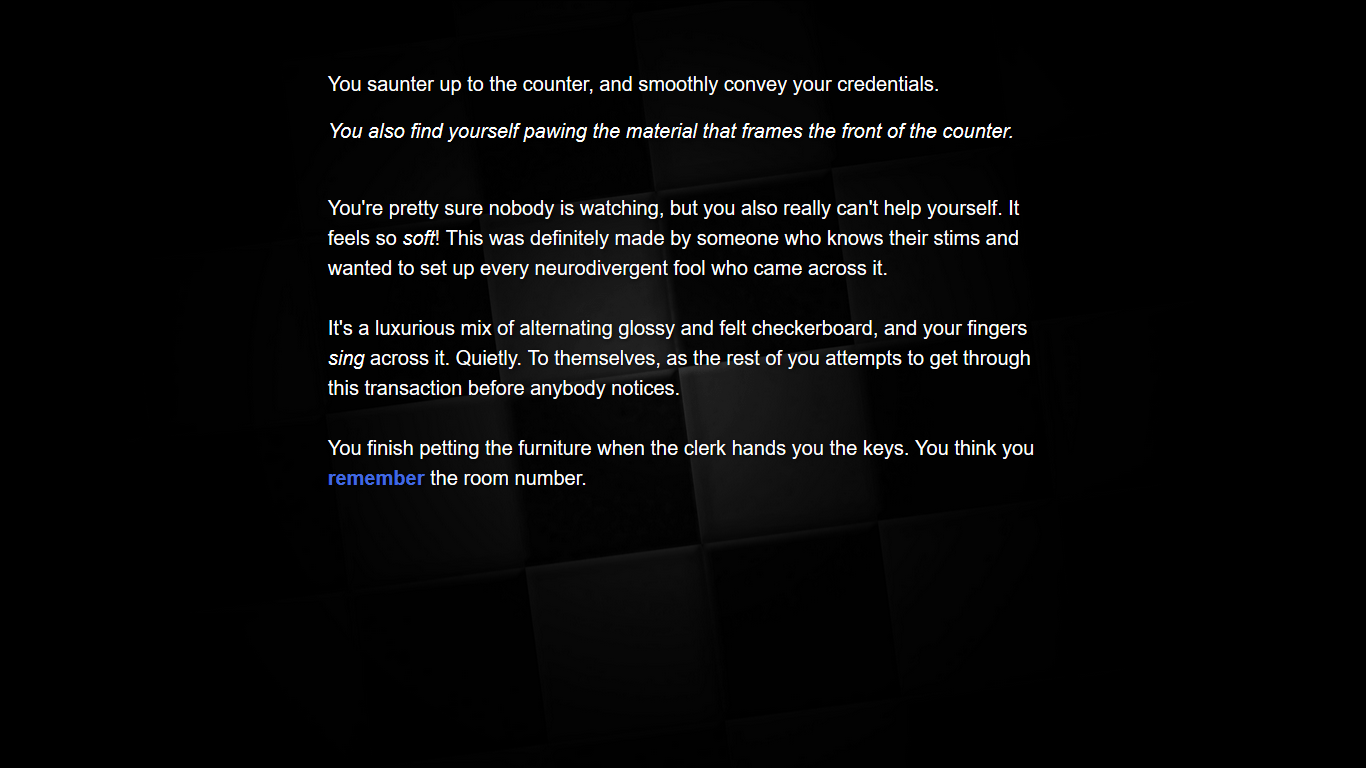 So far, so typical, at least as far as interactive fiction goes, and the writing is solid, as well. I especially enjoyed a description of a particular fabric’s compelling texture.

There’s also plenty of information on display here, and even if you’re fairly familiar with how the disorder works, it’s quite likely you’ll still end up learning something from Sarafian, like how caffeine affects people with ADHD differently or the way that the hyper-focus that often accompanies the condition can be useful in certain situations.

The Medium Is the Message

What makes Deficit’s presentation interesting is the number of low-tech tricks Sarafian employs to convey the “feeling” of ADHD in a hypertextual way that compliments the textual descriptions.

Some of these tricks are obvious and effective, if annoying, on a visceral level. The pace of text on the screen sometimes shifts intentionally; usually slow enough to absorb, it occasionally flashed past before I could read every line. Especially irritating to me as a fast reader, this nonetheless drove home the point about how difficult it can be for people with ADHD to focus, engage with, and absorb information. 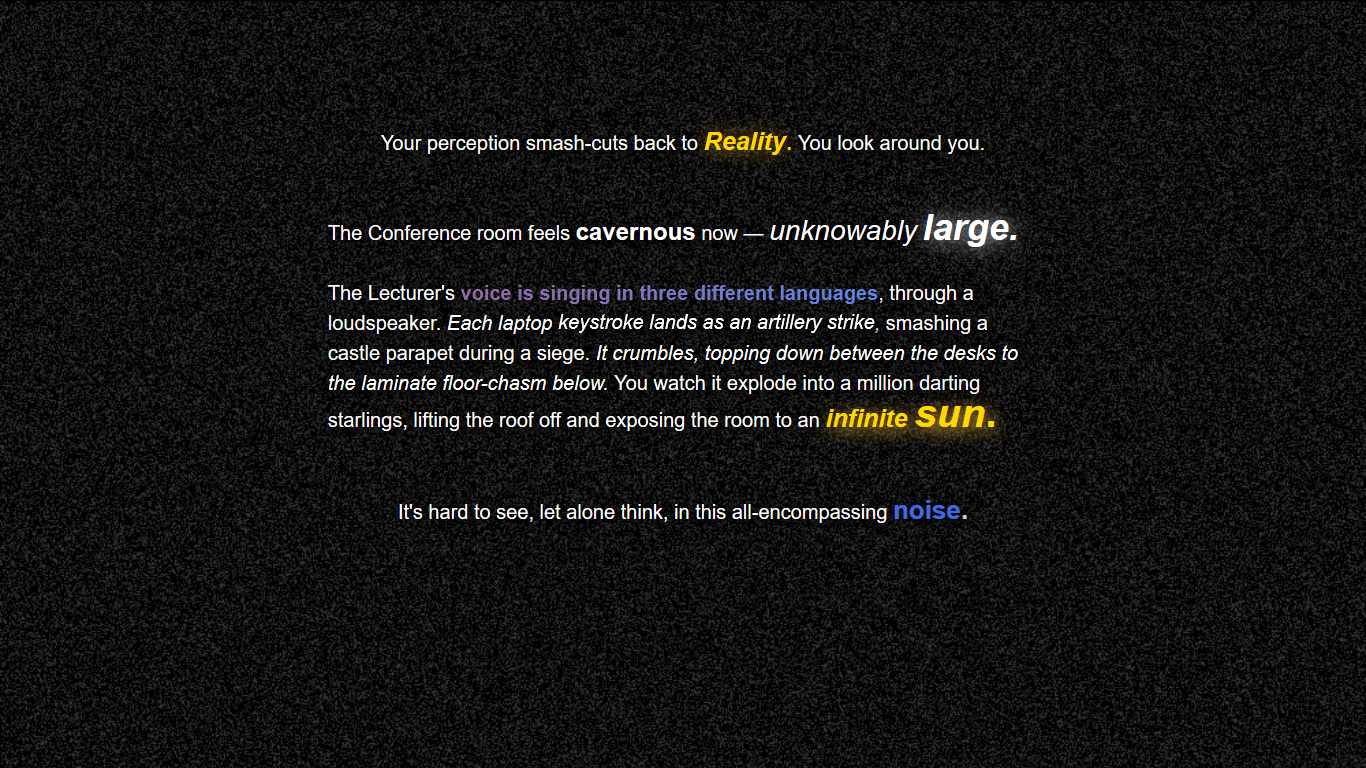 On the other hand, washes of blue background in a rhymed section talking about how visual stimuli can lead into multiple, simultaneous thoughts and imaginings – the specific example was looking at the ocean and eventually comparing the chaos implied by mythological ocean deities with mental chaos – was poetic visually as well as literally.

Focusing in on Lack of Focus

I don’t have ADHD. I’m anxious, though – even when I was a kid, I was a worrier – and these are anxious days (is there anyone who isn’t at least a little anxious right now?). In any case, while I didn’t directly respond to Deficit with sudden recognition or a light bulb moment of self-diagnosis, I definitely related to a lot of what Sarafian talks about in this game, especially the distractibility and inability to focus during stress, which might be a primary feature of ADHD but certainly isn’t exclusive to it.

It’s also worth pointing out that Deficit is an educational experience and – at least in my case – an empathetic one, but it isn’t a pleasant experience by any stretch of the imagination. Even if the ongoing pandemic and the myriad other uncertainties of 2021 didn’t already have me on edge, the screen static and unpredictably flashing and blurring bits of text probably would have gotten me there.

That said, this is a worthwhile game, an innovative way to portray the experience of living with ADHD, and more than worth putting yourself through 15 minutes or so of occasional unpleasantness (longer if you’re like me and get distracted looking at your Twitter feed between sections).

Deficit is available for free from Itch.io. 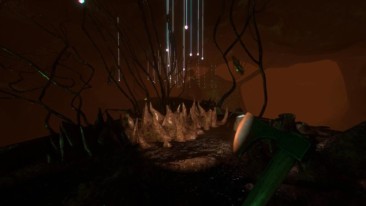 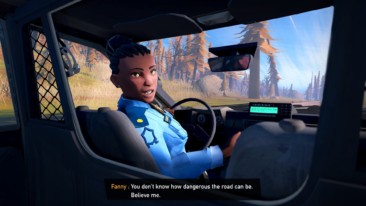 Road 96 – A Procedurally Generated Trip with Lots of Personality