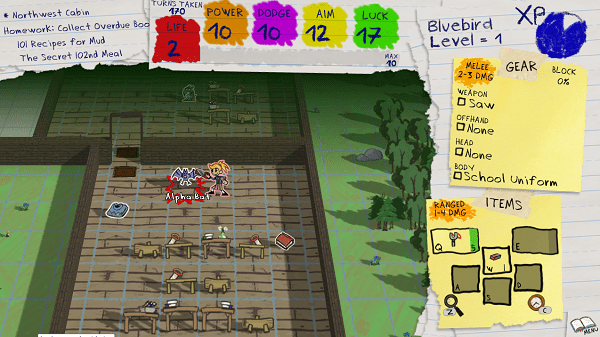 Crayon Chronicles – What We Think

Crayon Chronicles is a charming rogue-like game that offers a colorful, upbeat experience unlike any current game in the genre. Developed by Outer Grid Games LLC, Crayon Chronicles started out as a 3-day Rogue-like project that soon developed into a full-fledged game. It took 3 years to complete and garnered help from a Kickstarter campaign that was successfully funded. 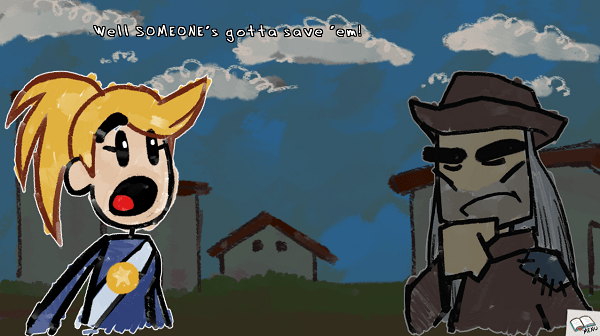 The story revolves around rescuing your friends who have been kidnapped by the swamp lord known as Stratolustrious Van Danderbeak – or Strato for short. This involves exploring a number of colorful locations and extinguishing the massive hordes of enemies that just don’t seem to like you for some reason or other.

One of the neater aspects of the game starts right at the beginning, where you can name and customize what your friends look like. While it doesn’t affect the gameplay at all, being able to save the friends I’ve spent time customizing makes it that much more endearing to play.

Crayon Chronicles is very player-friendly, with clear and concise tutorials for folks that are new to the genre. while also catering to rogue-like veterans with the surprising amount of depth and detail given to equipment customization and stat placement.

The game play is relatively easy to grasp. You can only move one space up, down, left, or right. This constitutes a turn. You can equip a number of original weapons and items from an owl on a stick to a stale oatmeal cookie, each with their respective stats or affects. Your goal is to clear out all of the enemies on a level and proceed further on through the story. This is a lot harder than it sounds, for enemies, along with items and areas, are all randomly generated, meaning that while one room might be relatively easy, the next could very well be life-threatening and require planning to proceed. 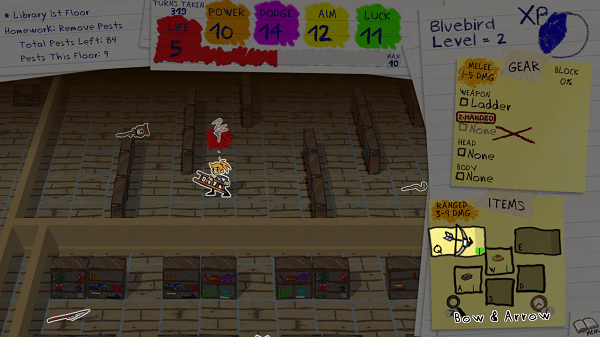 One of my favorite aspects of the game is that items picked up will always be put to good use. You’ve got your items that will regenerate some hp, as well as items that are meant to be thrown at enemies to cause more damage. You’ll need your fair share of both types to survive a room full of powerful enemies, forcing you to weigh your options carefully.

Because enemies will move when you do I.E. turn-based combat, you have time to consider the choices you have available to you, whether it’s as simple as rushing in and attacking everything in sight, or carefully sniping the most dangerous of enemies before they can hit you.

You will also regain a small amount of hit points whenever you enter a new room, which opens up more strategic possibilities. I found myself on the spot a number of times when I was low on health: should I fight my enemies and hope I came out the victor, or should I go through more rooms, regain health, and take the chance at coming across an even stronger enemy?

When you defeat enough enemies, you’ll be able to level up, where you will choose two of four stats to level up – Power, Dodge, Aim, or Luck, all of which have their own unique ways of affecting future battles. 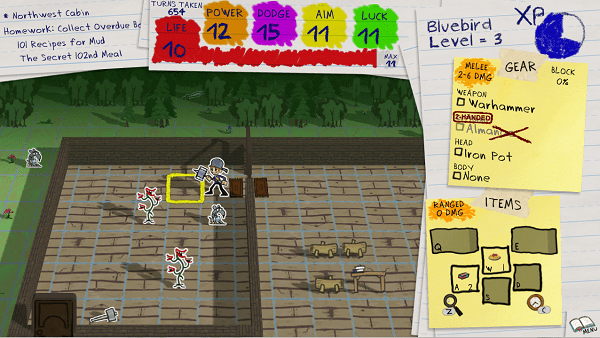 The audio and visuals for the game are quite possibly some of the most impressive I’ve witnessed in terms of matching with the theme they intended for it. Playing Crayon Chronicles takes me back to the days when I scribbled drawings on everything, creating imaginary creatures with my trusty set of crayons while using my wild imagination to create amazing adventures.

The music is perfect for setting up this type of mindset, with children playing in the midst of the main track. Other tracks for the various areas are all unique and original, all of which instills a sense of adventure while you play. One of my favorite tracks is the one that starts up when you are low on health. All of a sudden, the tone changes to that of sheer urgency! It says, get going, kick some butt, or you’ll be a goner! I love it.

I have very few qualms about the game. You aren’t able to save unless you intend to quit the game for a while – if you die, that’s it. Save is gone. You’ll have to start over from the beginning. This fact annoyed me somewhat, but it makes sense for how short the game length is – which is around 2 to 4 hours. There was also a small issue with the graphics in the game being cut off if you play on full screen mode – windowed mode is actually far preferable.

Crayon Chronicles has a substantial amount of content and enough replay value to pick it up even after you finish the game the first time around. While it is relatively short, the game offers everything a rogue-like enthusiast could ever want while also appealing to first-timers who want to explore the genre in a bright new environment. 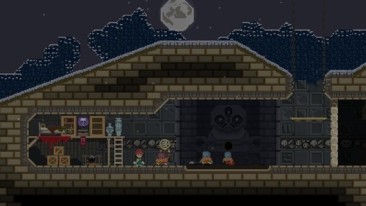 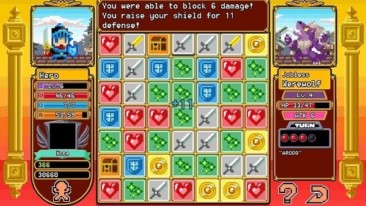