Toronto based artist Nathan Jurevicius brings us this psychedelic collection of “heartfelt stories” that feel Tim Burton or Richard Gorey’s take on a child’s bedtime story book but as a point and click Flash game with a scale larger than most.  Scarygirl has a giant octopus companion that follows her around, and the assistance of various unusual mentors that include Dr. Maybe and Bunniguru to help her along her crooked path.

Dangerously addictive cult hit that involves your drawing a freehand track for your poor Flash avatar to ride.  Thousands of tracks have been saved.  Just check it out and you will not only understand, but be hooked.  You sadistic freak.  The original game proved so successful (in part due to the aggregate community that developed from its use) that it spawned a much prettier, family-friendly, commercial looking version creatively titled Line Rider 2: Unbound.  This is a product demonstrating the indie developer begetting indie fans who then go on to create their own indie mods, or in other words, micro indie versions – a brilliant design on the creator’s part; make an indie game that is essentially a map maker / slash sandbox for aspiring indie makers or fans.

Get Line Rider 2 Unbound at Direct2Drive

Gorgeously dreamy other-world wherein movement is accomplished by whipping out your frog-like tongue, clinging to clouds and using momentum to ascend to the next.  Based on the musings of childhood memories.  Also a runner up at Indiecade 2009.  Yours to play free online.  Jump into the dream. It will be better than surfing YouTube for the time you give it.

This Is The Only Level

Imagine N+ but with only one map.  Rather the gameplay itself changes and becomes increasingly difficult.  Totally challenging,m amusing and awesome at the same time.  Like an awesome milkshake.  With damage.

Play This Is The Only Level now.

A series of poems that you can play, rendered in graphics that pay tribute to 8-bit graphics from Argentinian developer Daniel Benmurghi.  At first it won’t make any sense, but after minutes have passed, you won’t want to leave.

Although it’s a simple missile defense shooter at first look, the combination of graphics and non-violence that come together for this little physics game lead to some rather unexpectedly sticky amusement.

OK, we are bound to get some lettuce thrown at us for stepping out of strictly “indie game” bounds here but we’re not really.  Ultimate Flash Face is a fun game fro creating your own, well face, by adding all the various components from a nose to mouth to beard to glasses and then being able to save or print the result.  There are a bajillion Flash toys out there, but we wanted some levity and realized that this can extend to the same sort of fun that really, all of us should be having a little more of, and spend less time trolling and tossing lettuce.

(This statement has been approved by aging hippies).

Furthermore, Ultimate Flash Face is exactly what you’ll have after working your way through the above titles.

Go get your ultimate Flash Face on now.

We would love to hear your opinion on 2009’s best new Flash-based browser games for our upcoming best-of list.  Please post it in the comments for this article. 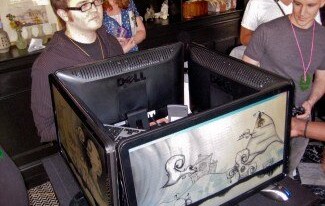