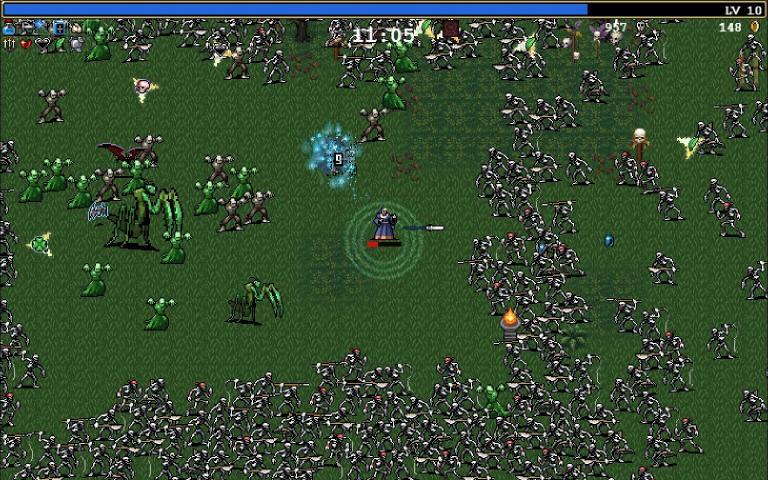 Every year or two, we at IGR notice a pattern start to emerge: walking simulators, Rogue-likes, Rogue-lites, Metroidvanias, Souls-likes, and idle clickers. In the past year, we have observed a new trend that certainly has a long list of progenitors – from the dreaded Zerg in Starcraft to RPGs where you spam powers in all directions – but somehow Vampire Survivors feels a little different. An absolutely zany blend of massive waves of mobs converging upon you and what could almost be described as an idle clicker – in that your primary hope is to just stand still and put them down – it’s a perfect balance of offense and defense radiating out of you like Neo’s most evolved form in The Matrix.

They’re being called “horde games,” but more tellingly, they are calling all mutations and derivations thereof Vampire-Survivors-likes or “VS-likes.”

Imagine playing an old-school RPG action game like Gauntlet but as Everything Everywhere All At Once (so far, no hot dog fingers dimension, but I would not be surprised if I did eventually find one in this game).

Let’s start at the beginning: You are a turner of the undead, dropped into the middle of a rural landscape (albeit 16-bit Commodore-64 style), when suddenly throngs of bats descend upon you.

As you move about trying to avoid them and picking up their shiny remains in the form of blue gems that make a perfect casino bling sound, you notice that the mods are shifting, adding skeletons, zombies, and other atrocities to the fray. You find you’re surrounded by a circle of cursed idols firing balls of fire at you in a concentric circle. Ye gods! Get to the choppa! 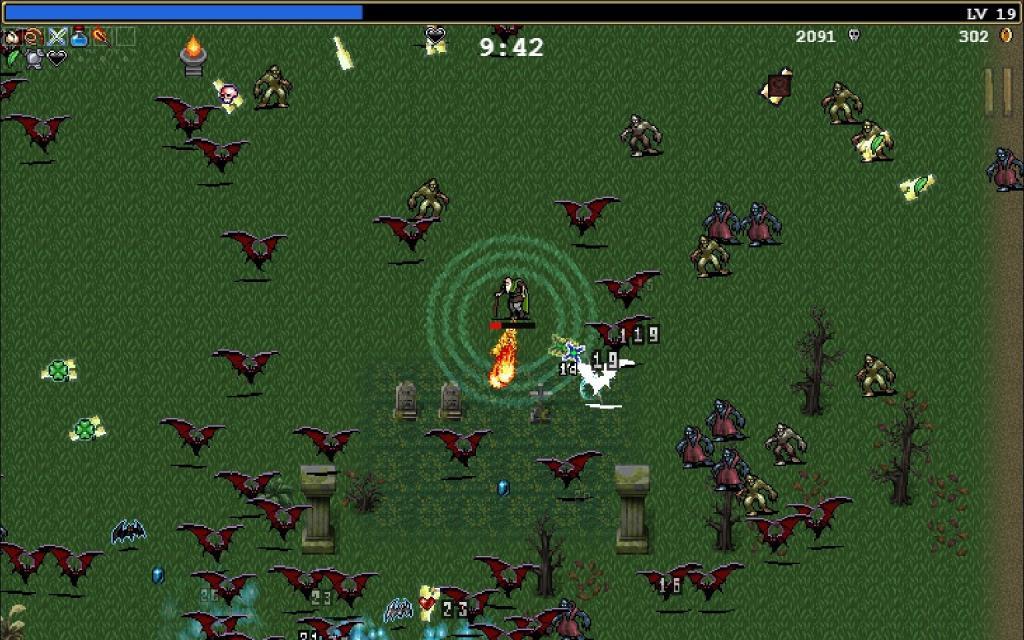 The intensity of the onslaught in Vampire Survivors is almost to the point of parody. However, there is a lot more to it than may at first meet the eye (which is saying a lot). Combinations of power-ups can unlock evolutions, and pacing yourself to find the right ones before you trigger a keystone level is essential to your survival strategy. Note that after 26 hours of play, I still haven’t unlocked “Survive 20 minutes” with any character but the starter.

Indeed, every character you unlock comes with some sort of inherent bonus but often at a great initial disadvantage. In fact, you can even buy a handicap as a “power-up” in exchange for other benefits and bragging rights. 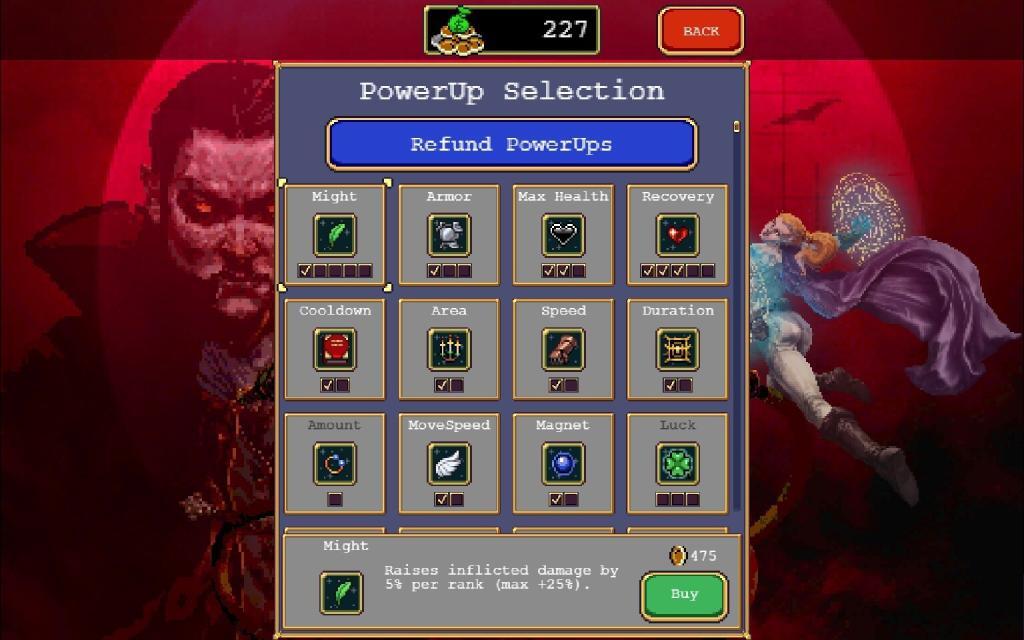 You may need to rove about to get to the next destructible item that can drop essential loot, like the now-famous roasted chicken – your sole source of health recovery besides passive powers – or gems or massive short-term AoE effects, but mainly you are working to last as long as you can and observing the effects of your decisions to date.

There is also a form of legacy progression wherein you accumulate new gold during every run that adds to your universal total and can be incrementally applied in every subsequent game thereafter to power-ups that are intrinsic to your PC, regardless of the character archetype you choose. This may seem to make things increasingly less interesting as you begin ever-stronger, but in fact, I find it tends to make me bolder.

Navigating my way through a fresh run, I endeavor to do as little as possible, striving for that Zen-like state of mastery, but there is still quite a bit of running around (really the only control you have is to move in one of the eight directions, orthogonally or diagonally). This, besides selecting your next upgrade, is all you will ever do. But it does feel arcade-like in that way.

If that is indeed what you end up doing – that is, running around like a chicken with your head cut off – you’re probably doing it wrong. You really should be able to stand your ground and just take down the pulsating, rippling throngs of undead evil coming your way without batting an eyelash.

There is a jubilant, no-holds-barred, game-for-sake-of-the-game creativity at work here. For example, the September 15th, 2022 patch introduces: “the new super rare weapon Super Candybox II Turbo, plus the extremely powerful new Arcana XXI – Blood Astronomia, and officially introduces the super glitchy secret character ‘missing’ that can now be unlocked normally (instead of editing the game files to unlock them lol),” that belies the ever-growing number of fans coming to this little indie revelation.

Check out this trailer for the most recent patch before its official commercial release to get an idea:

Ushering in the Age of the Vampire

From a cultural impact perspective, there are hours-long Twitchstreams around this game. There are countless look-alikes. The year has seen an absolute surge in this style (we won’t name names because it must have just been a ‘coincidence’), and Vampire Survivors was at the center of the explosion, pun intended. There are others that are more nuanced, complex, and evolutionary, but there is something about the essential hardcore, distilled nature of Vampire Survivors that hits a sweet spot.

It was created by someone who during the pandemic wanted a way to divert themselves while to focus on other stuff – a sort of passive exciting RPG-like. Now, but a year and change later, they are completely rebuilding the game’s engine and have seen an absolute unicorn emerge in terms of popularity and sales. 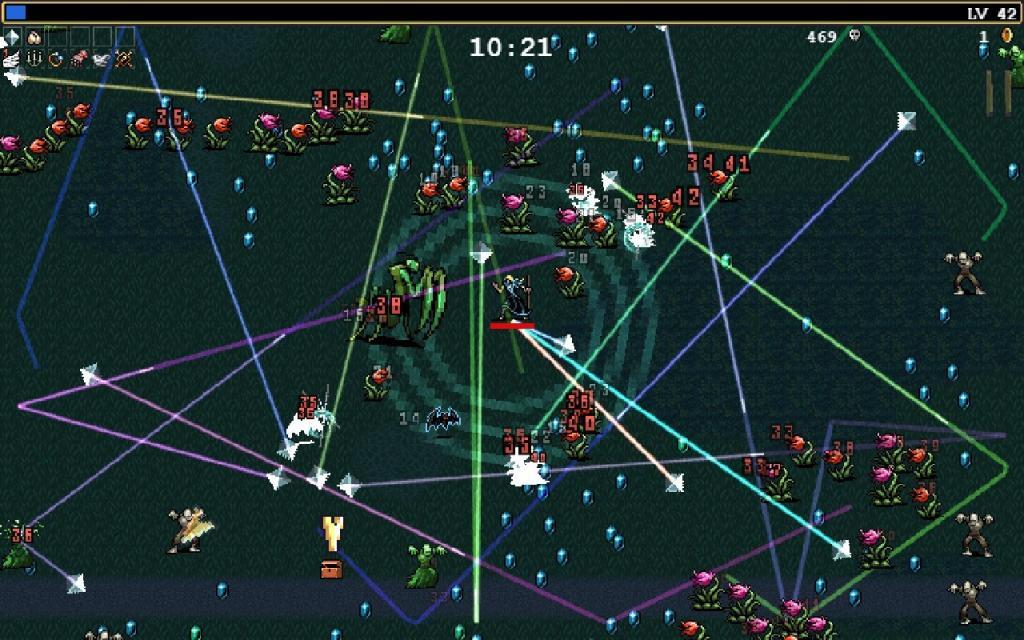 After its Early Access launch in December 2021, the game has accumulated, at the time of this writing, over 116,000 Overwhelmingly Positive reviews on Steam. And did I mention it’s only USD $ $4.99? (They upped the price $2 between Early Access and 1.0 release).

If this was 1985, it would already have its own Saturday morning cartoon.

To understand how the success of the game caught everyone by surprise, not the least of which was the developer, check out this quote from poncle founder Luca Galante:

“I started making Vampire Survivors at the peak of the pandemic after working for a popular burger chain and later as a web developer, because I wanted something to play in the evenings for myself. The attacks are designed to be automatic so that the player can concentrate on something else while playing and just have a good time; I never thought Vampire Survivors would become such a big hit. It’s really an indie dream come true! I can’t wait until players can see the surprises we have planned for the full launch day!”

The sweetspot they have hit may stem from the fact that the culture is always ‘second-screening’ – watching TikTok while simultaneously reading the subtitles on whatever Netflix or Shudder binge they have on.

Perhaps because society seems more unhinged than ever, it is the grand satisfaction to the Neo-Keanu godzone stoic reaction required to manage the unrelenting onslaught of issues coming your way. That and the clambering towards the unlock, whether it be character, skill, level, or secret.

Whatever it is, whatever led up to it, and whatever follows, 2022 was the year of Vampire Survivor – a perfect balance of progression, customization, idle, strategy, action, and emergent gameplay, wrapped up in a deceptively understated package that draws on the best of its influences and is easily one of my favorites of 2022.

It finally reached 1.0 release today, the publication date of this article: October 20, 2022.

On the day of its commercial release, Galante gleams: “I truly cannot wait for fans to find out all the new secrets we have hidden in v1.0 of the game. Other than that I’m also excited for a long nap, since we have been updating the game almost bi-weekly since it’s launch into Early Access in 2021. For the people already asking if we are working on more updates, only time will tell!”

The final patch on launch is available in 11 new languages, and most importantly brings a true ending and final boss fight to the game.

Vampire Survivors is available via Steam.

Check out the launch trailer for Vampire Survivors 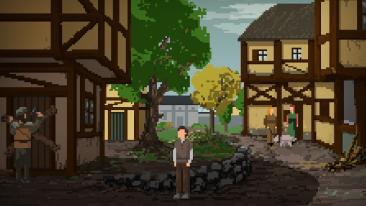 The Plague Doctor of Wippra Review – Symposium of Sickness