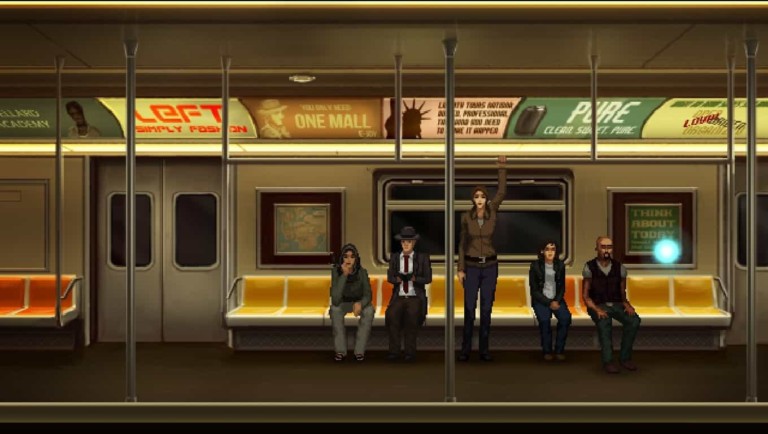 Coming off the fantastic Blackwell series, Wadjet Eye Games prove that they can create fantastic character-driven adventure games. Unavowed is their latest and most ambitious game yet. 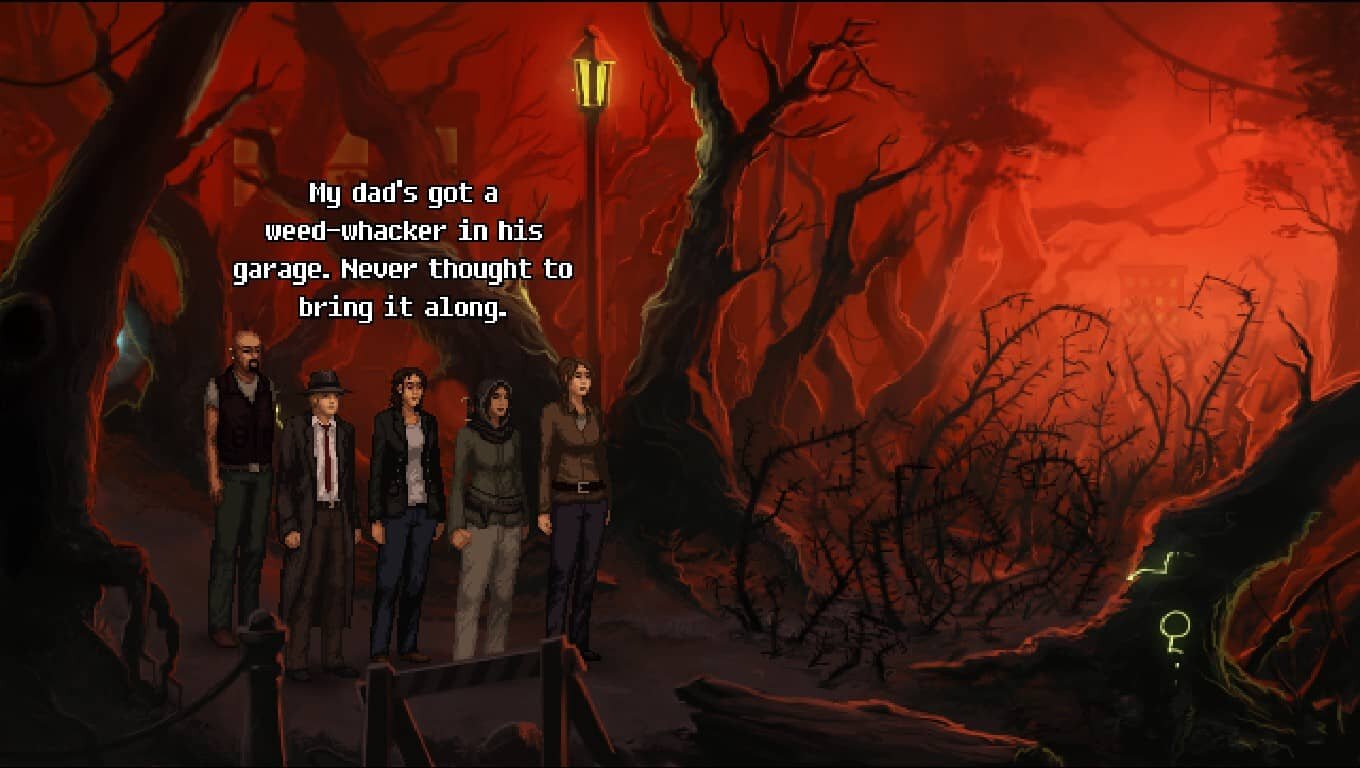 You start off choosing between a man or woman and one of three origin stories. This allows you to shape your character slightly and feel a little bit more connected to your protagonist. This choice really only changes opening scenes and certain lines of dialogue throughout the game. Once you have your protagonist set, you begin by finding out that something had possessed your body.

While you were possessed you killed people and psychologically manipulated others to do your bidding, all for some mysterious goal. Luckily, you come in contact with the Unavowed, a secret underground organization that deals with stopping supernatural evil. This organization consists of a djinn named Kalash, his daughter Mandana, and a fire mage named Eli. They exorcise the entity from your body, and you soon join the Unavowed in order to find some answers and right the wrongs your possessed body has done throughout New York City.

Possessed by a Strong Story

The narrative is gripping and interesting, especially since it does such a good job of slowly revealing why you were possessed and what you exactly were forced to do.

Unavowed is set up much like episodes of a television show where each specific area of the city is like a self-contained story, detailing the horrors you involuntarily committed. You enter an area, talk to people, talk to more people, pick up some objects, use objects to solve puzzles, to solve the mystery of each area. You’ll come in contact with distraught people, lost ghosts, mythical beings and creatures from other worlds. You never know what you’ll encounter next, which makes going into new areas exciting. Overall, each area captures the supernatural noir tone perfectly and makes great use of the point-and-click genre tropes you’d expect. 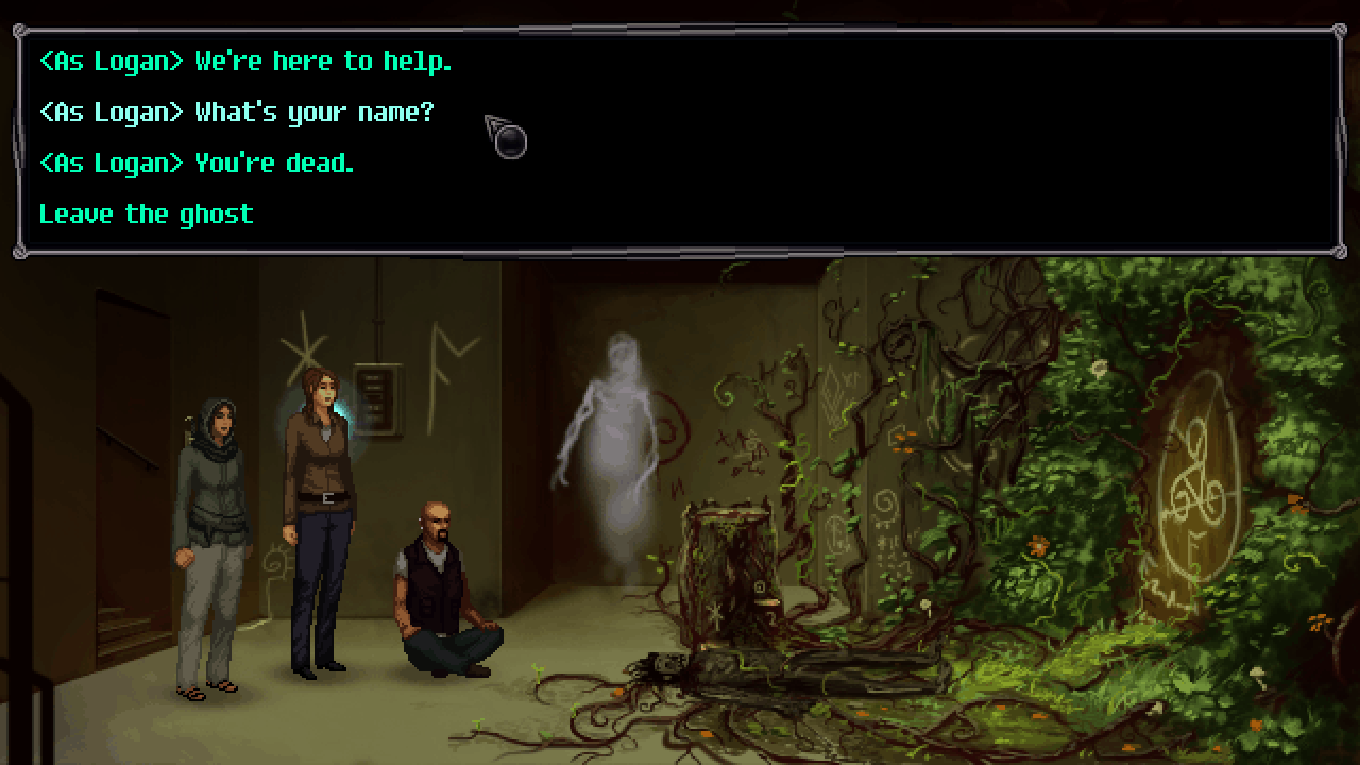 You’ll be doing a lot of light puzzle solving and going back and forth between NPCs when you’ve gathered more physical evidence or heard more character testimonies. This is a narrative-driven game, so expect a lot of talking. However, this isn’t a bad thing, because the writing and voice acting is superb.

Since you have certain party members to chose from, it can affect how you approach situations within specific areas. For example, Logan can talk to ghosts, allowing you to use him with ghosts you may come across. Eli can set things on fire and read things that were set ablaze in the past. This can save you some time or just make situations play out slightly differently. The great things about this system is that there is always another way, so you’re not screwed if you don’t take a certain member with you.

Puzzles can be a bit on the easy side, but they are mainly there to mix up the gameplay, as opposed to creating something challenging. And since the game is so narrative-driven, it makes the overall story flow better, since you’re not getting stuck on complicated puzzles. Also, you’re not punished heavily for choosing specific dialogue options. This can make situations feel less tense, but I didn’t mind, because the story was just so engaging. 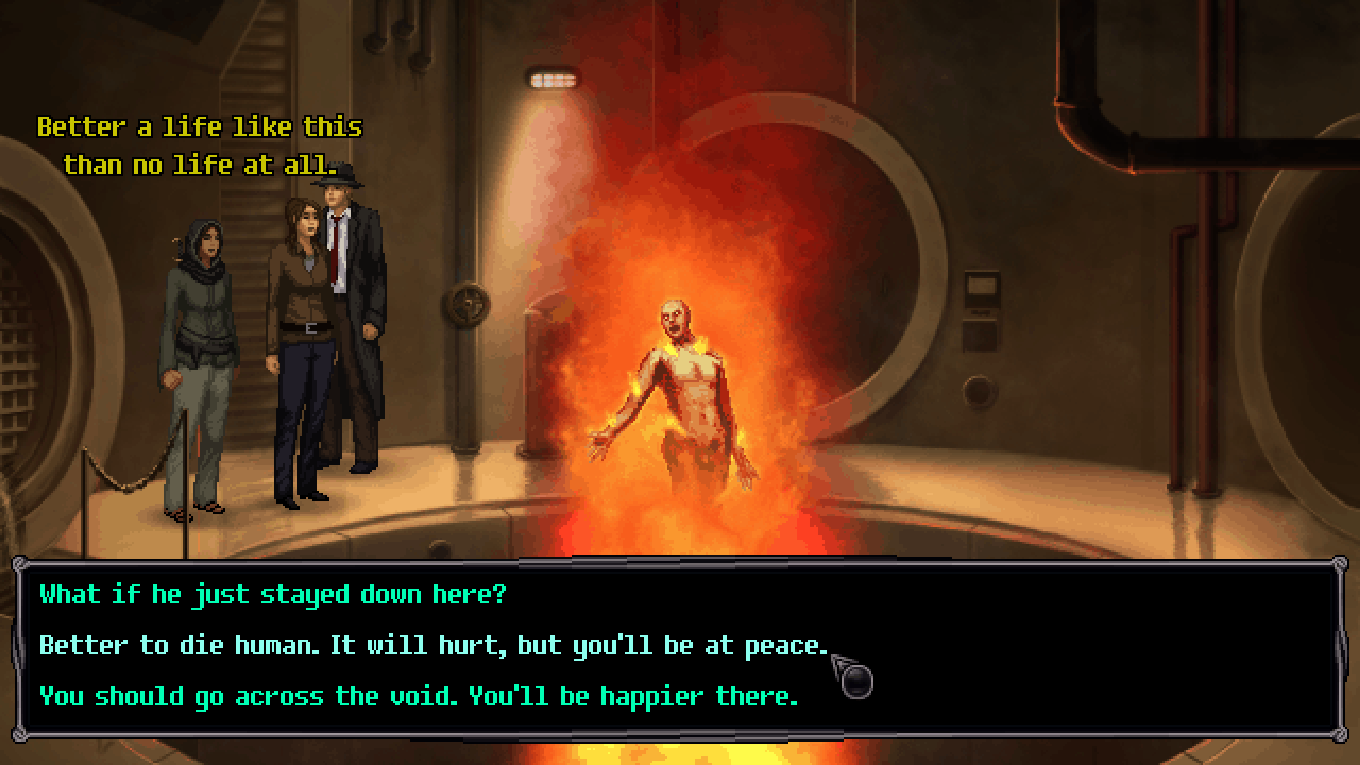 Sometimes dialogue options occur when the game flashes back to scenes when you were possessed. Here you get to choose from a handful dialogue options. The different choices don’t change the game all that much, and don’t lead the narrative down many branching outcomes. These can eventually feel less rewarding, because some dialogue options will be different wordings of the same basic choice.

Overall, the dialogue choices only matter at key moments when you’re deciding the fate of characters. Besides these key moments, dialogue options can come across feel akin those in The Walking Dead series by Telltale Games, which I didn’t have a problem with but I know can be a turn-off for some.

Regarding the dialogue options that do matter, choosing to let something live was more oftentimes than not a difficult choice. Do you trust that a supernatural being will not harm again? Or do you kill it? Choices like these are scattered throughout the game and do have weight, because they may come back and haunt you. The game excels at showing you the reasons behind characters’ actions and helping you to better understand them. This attention to character motivation and development makes Unavowed all the more engrossing.

Haunted by the Past

Besides the focus on characters in each area, you can also do a lot of talking with your party members. They each have pasts you can poke into, motivations and distinct personalities.

Eli, the fire mage, is coping with the fact that his kind have been hunted for many years. Since he has to live a secretive life, he has to sacrifice his relationship with his daughters in order to keep them safe.

Logan is a recovering alcoholic tethered to a ghost. But the ghost he’s tethered to is that of a young girl named KayKay, a playful yet sharp reminder of childhood innocence in a world invaded by evil. Some party members are developed more than others and given more attention during the main narrative, but that’s a small issue since there is already a satisfactory amount of character development. 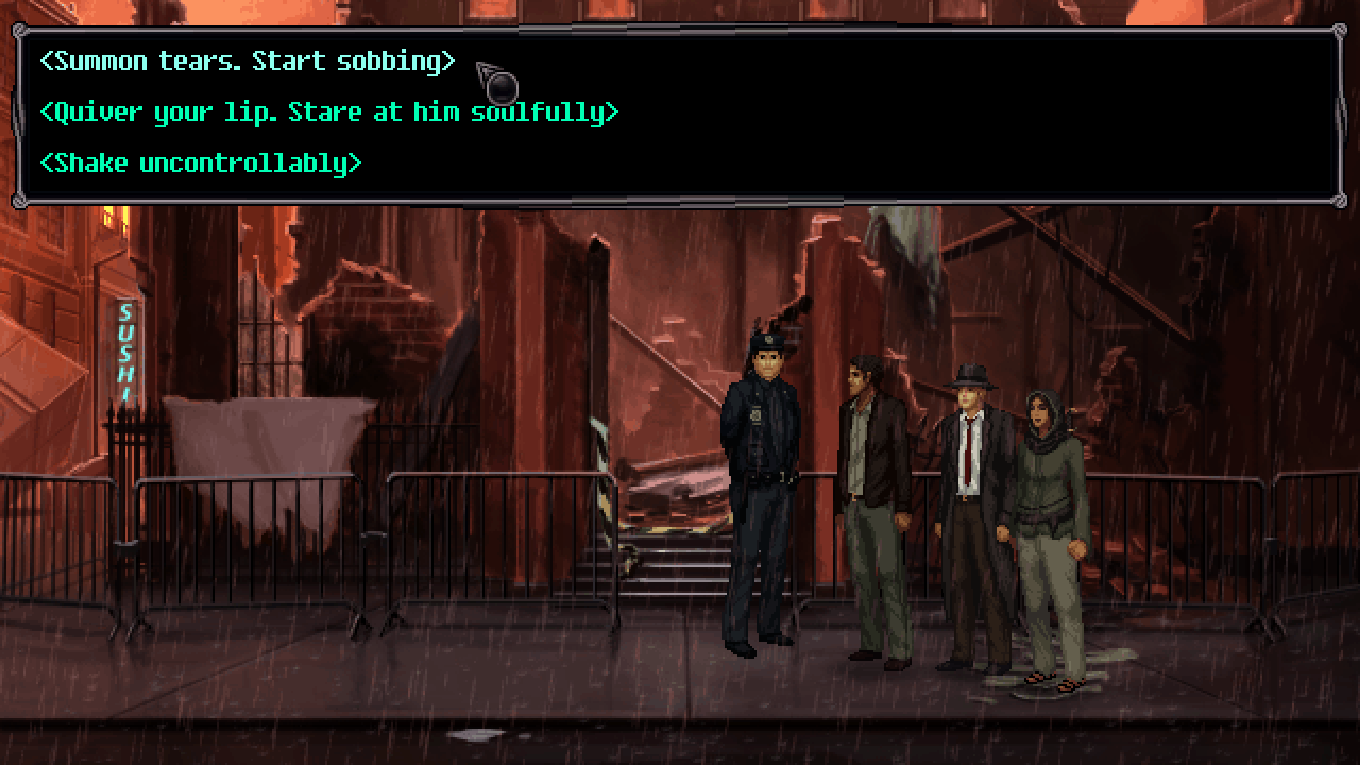 It’s refreshing because often times point-and-click games feature one-note characters, only there to provide something which helps push you through the story. Here, the world feels more alive and the characters fully realized. I legitimately cared about a number of them, wondering and hoping they’d be all right throughout my play-through.

Fantastic voice actors also help these characters come to life. Everyone across the board delivers lines with the right cadence and a wonderful amount of personality.

This game impressively captures the tone and aesthetic it’s going for. The supernatural mystery is amplified via many rainy areas and nighttime settings. City streets are barren, yet feel lived in thanks to detailed backdrops. The music can be heard throughout containing an eclectic mix of guitars, pianos, saxophones and violins. Tracks help set the mood from heartfelt scenes to tense situations. It all fits perfectly, and the composer skillfully makes it all sound cohesive.

Unavowed is one of the greatest adventure games that I’ve ever played. It’s a fantastic adventure that focuses on the core of what makes the genre good: characters and story. I highly recommend this game, and can’t wait to replay it.

Unavowed is available via Steam.

Watch the official trailer for Unavowed below: 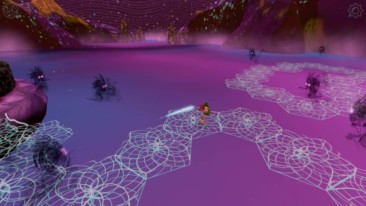 A Rite from the Stars – Starry Starry Rite 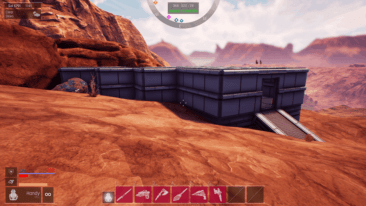