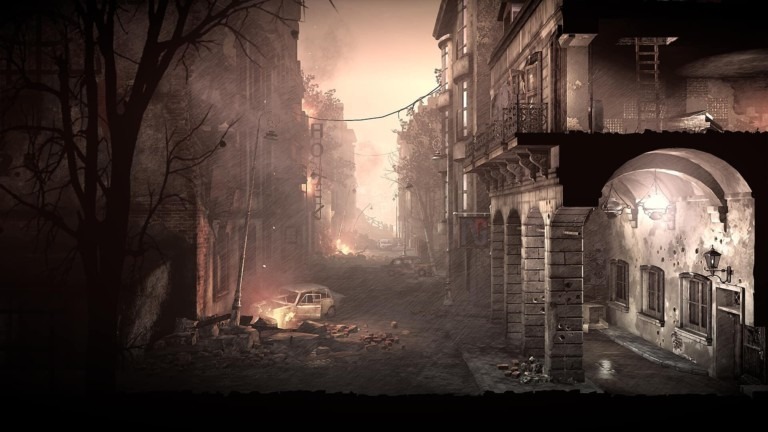 Game Name: This War of Mine: Stories - The Last Broadcast DLC

This War of Mine: Stories – The Last Broadcast by 11 bit studios

Wow, what a bleak place this is. I guess that is the real point, after all. This is the second DLC for This War of Mine, and Stories: The Last Broadcast was written in cooperation with Meg Jayanth, best known for 80 Days (one of my favorite games ever) and extraordinary developers 11 bit studios out of Warsaw, Poland, whose catalog also includes Anomaly: Warzone Earth, and Frostpunk.

You start with a disabled man, Malik, whose leg was destroyed by a bomb and his wife, who will likely be killed by snipers as she leaves to find any trace of news, whereupon her husband will quickly succumb to sadness and die. So yeah, the tutorial phase out of the way… 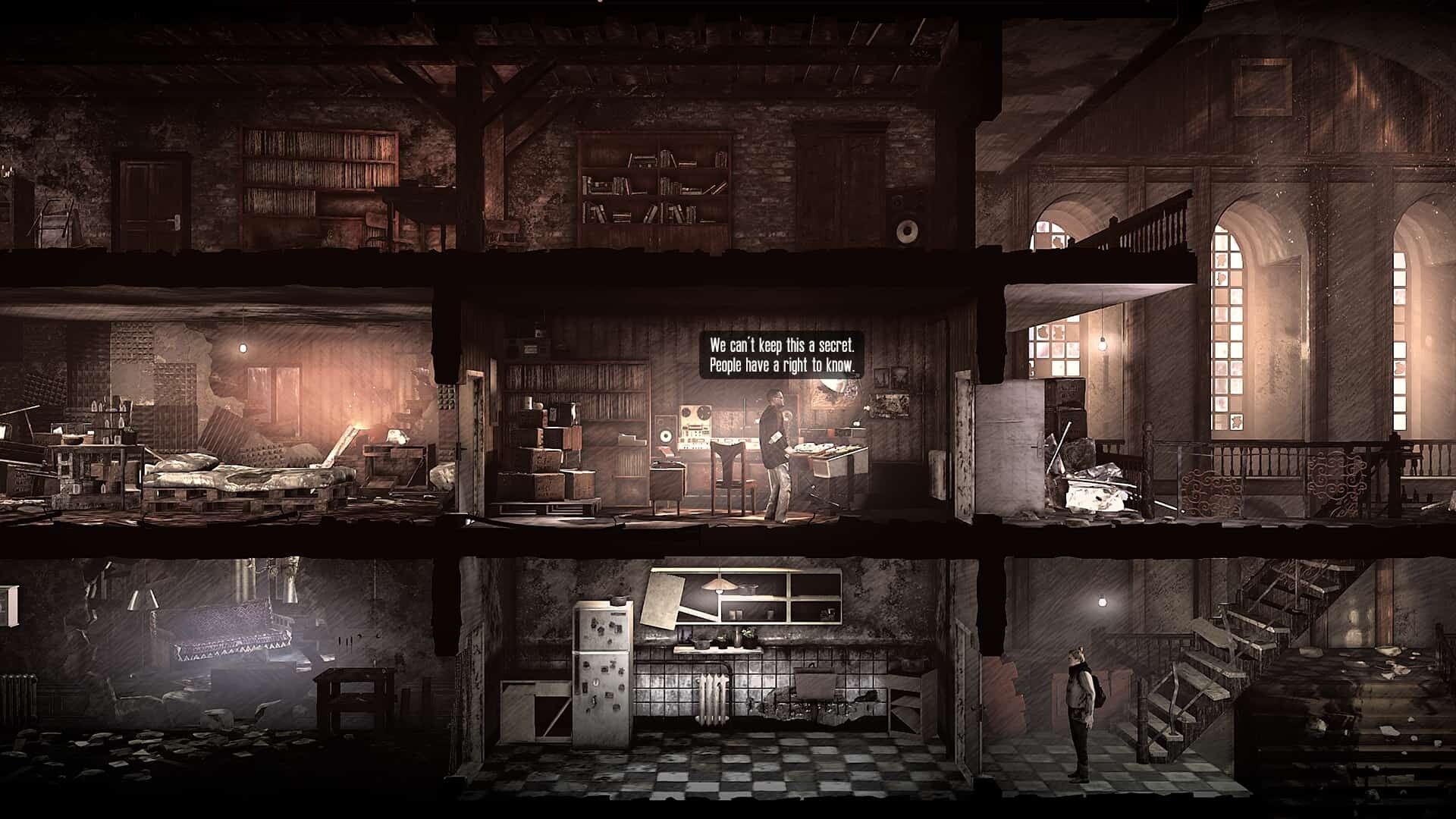 I am the right person at IGR to review this title as I am a fan of survival games. Consider me a soft prepper; I have three bug-out bags, thyroid pills, respirators, oxygen canisters, but though I have more canned food than I should ever admit to hoarding, I do not own a bunker or a rifle. Instead, I will try my hand at the wastes when they come. On the other hand, I have never had to endure the ravages of war firsthand.

This War of Mine – the base game – which I played when it first came out, was designed and marketed as a sort of simulator to create compassion and insight for the victims of war: the people in the streets, in the houses and everywhere in between. Those who must deal with the aftermath, scraping together whatever meager resources may remain, not only in terms of food and building materials, but also information, spirit and resilience. 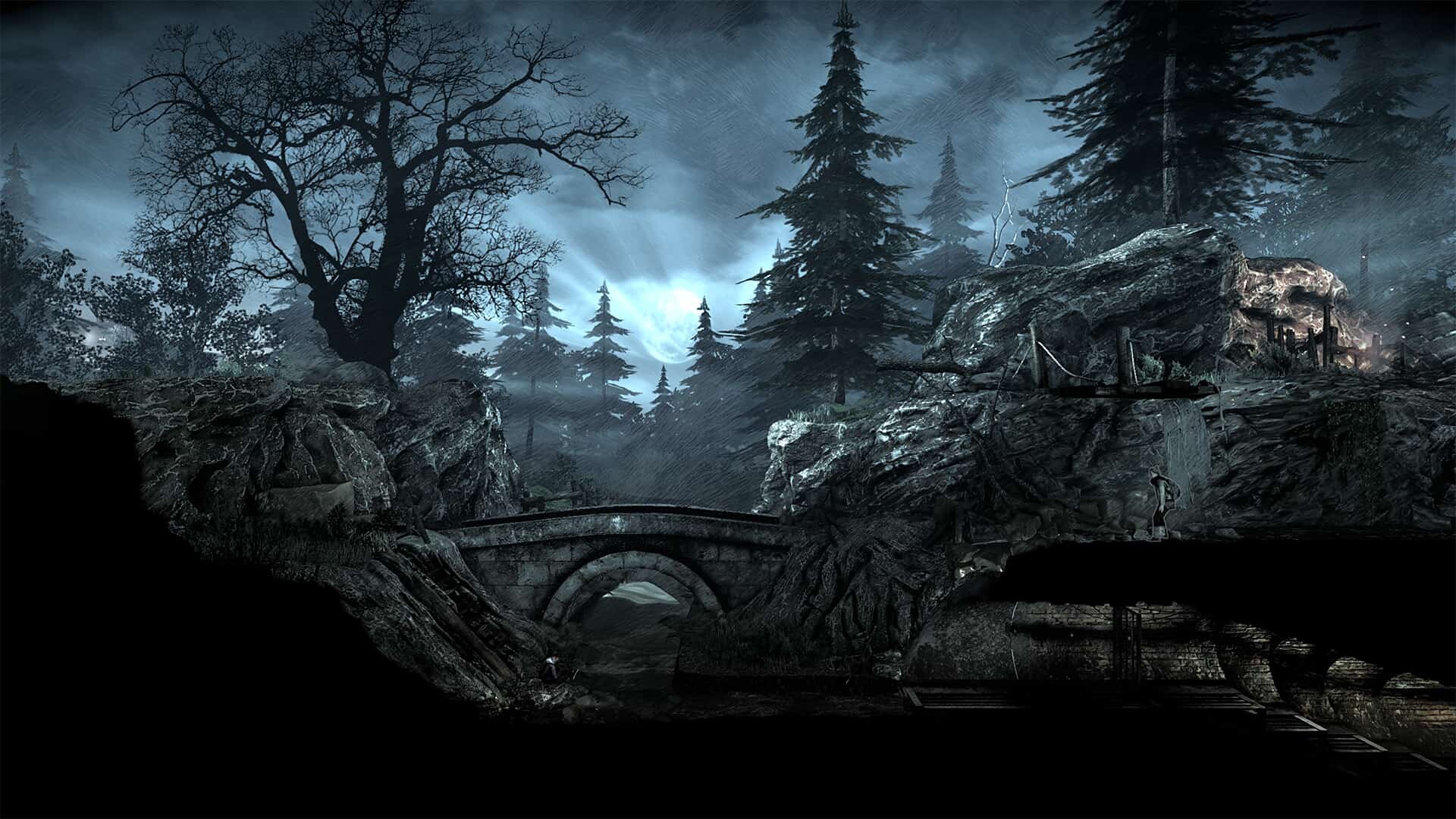 For a gamer, though, it is essentially a point-and-click adventure that that offers several actions – Look, Search, Listen, Move, and a few sundry others – as you deploy one of your living playable characters through a variety of checkpoints in a completely destroyed city. They return home and share the spoils with the others left in the house. Sometimes strangers will come knocking at the door with threats or offers or wind of new scenarios from the outside.

The new Stories DLCs, part of the Season Pass, truly do add a refreshingly richer context to the base game. By the same token, they are also forcing you into a particular storyline that may not afford the same more ambiguous replayability of the original. But if you are indeed a fan of the base game, then these new characters and narrative infusions will be welcome add-ons.

The Last Broadcast DLC adds four new locations, new playable characters, and – in this particular installment – a radio broadcast mechanic and an investigative branching narrative that can lead to one of six different endings. The characters also look slightly different, using a photographic cutout style.

The soporific tones of a delayed clean finger-picked electric guitar underscore the slow-moving days wherein you perform any and all available and moderately self-sustaining actions before you call the end of the day. 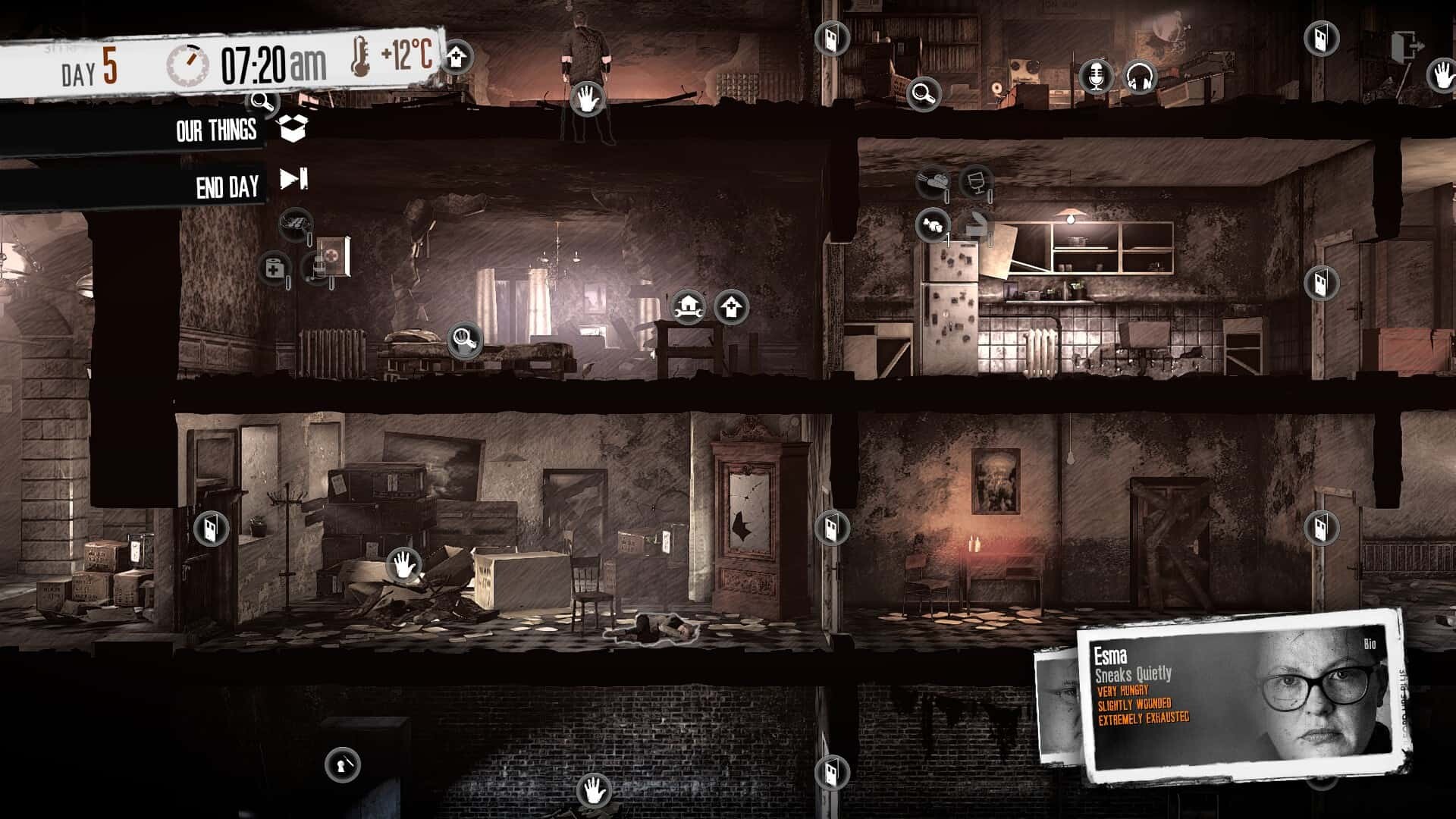 You are only also playing one character here – Esma – as Malik is unable to leave his floor, let alone the house itself. You direct Esma through a series a small scavenge adventures, hoping not to get killed by virtually anything out there so you can return to Malik with intel to broadcast into the void. Oh, and supplies that can be used to craft out items or otherwise find sustenance.

Rinse and repeat for as many days as possible until everyone is inevitably dead.

The Tyranny of Time

A few caveats/gripes: though the locations have been remastered in a Sumi-e painterly style, the animations are a little juddery. I actually checked my GPU settings a few times at first to verify whether that was a memory issue or just a creative choice. It turns out to be the latter. This effect can also be dialed up or down in the setting (woo, options!). Also, when you fail – which you will – you return to the very same opening cut-scene, which appears to be non-skippable.

Fortunately, you can also go back a day, but if your choices were already setting you up for failure, this won’t help much. There is no save function, though you can resume from where you left off. Also why, OH WHY is there no way to speed up time? I get it. It’s oppressive, it’s hard to stomach this uncompromising dark world we live in, it’s emotionally grueling, but IRL? Ain’t nobody got time for that.

In the Grim Dark Present, There Is Only War

This War of Mine definitely has a nice design quality, but it can also be a bit of a slog, a slow-moving, fairly constrained pseudo-simulator, best taken as a poetic tribute to those who suffer the travesties and hardships of war-torn regions, and less as a true exercise in survival tactics or even character or resource management. 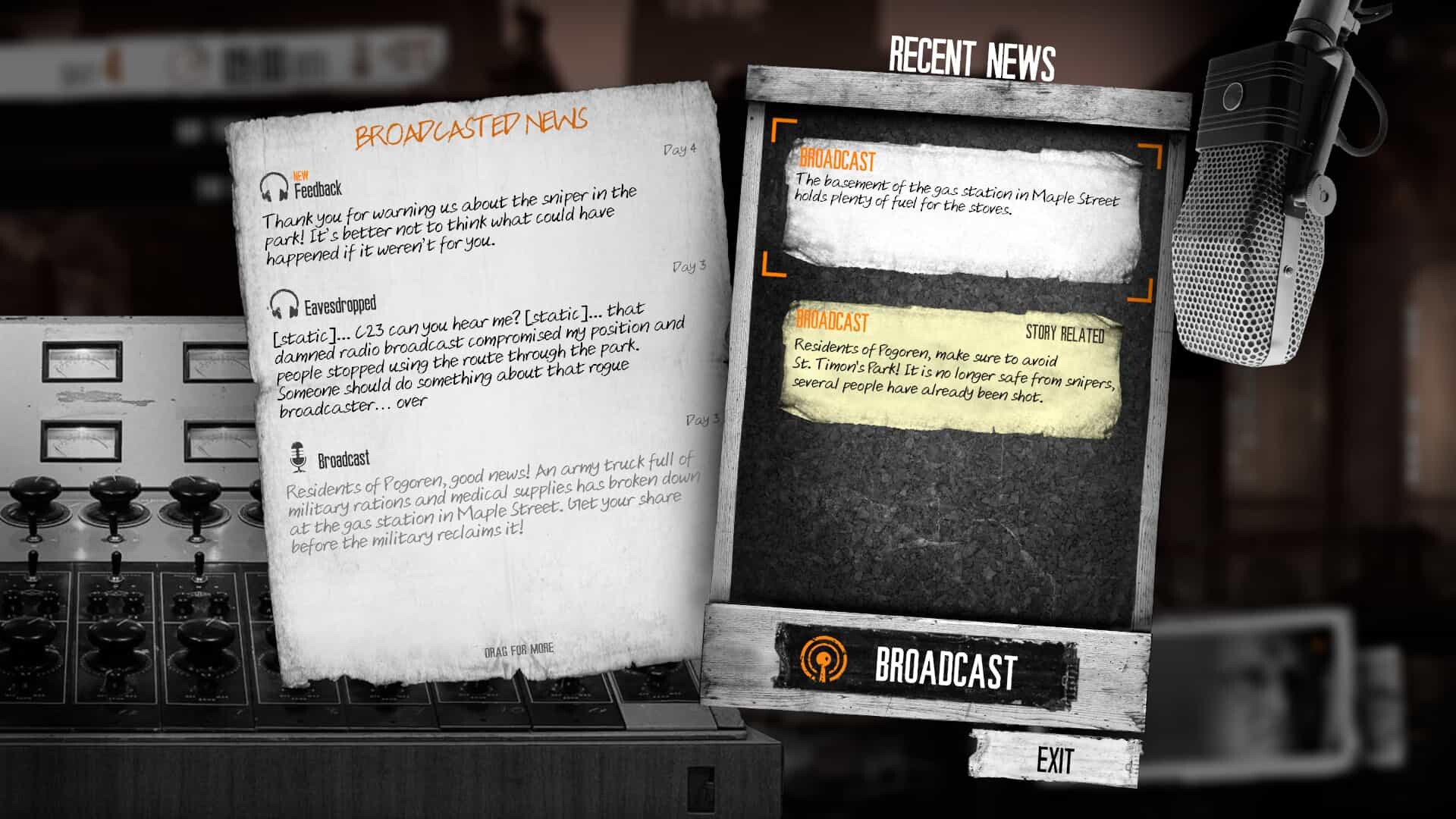 I’d love to score it higher, but the slow turn-over, the fairly linear play-style (despite its illusion of choice) and the clunky albeit beautifully artistic visual flow wore down my curiosity and tenacity rather quickly.

For a similar game that really got under my skin, check out Sheltered (reviewed for IGR by infinitywaltz.)

As a style piece, This War of Mine: Stories – The Last Broadcast delivers. If you are a fan of the original, you can’t go wrong with the new flavors and scenarios of the new chapters.

This War of Mine: Stories – The Last Broadcast DLC is available via Steam, Humble Bundle, Green Man Gaming and GOG.

Watch the official trailer for This War of Mine: Stories – The Last Broadcast DLC below: 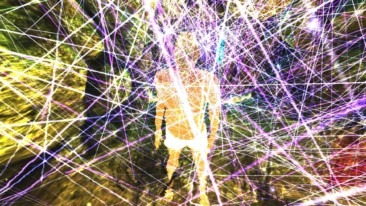 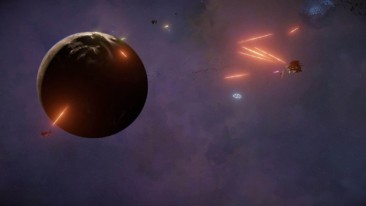