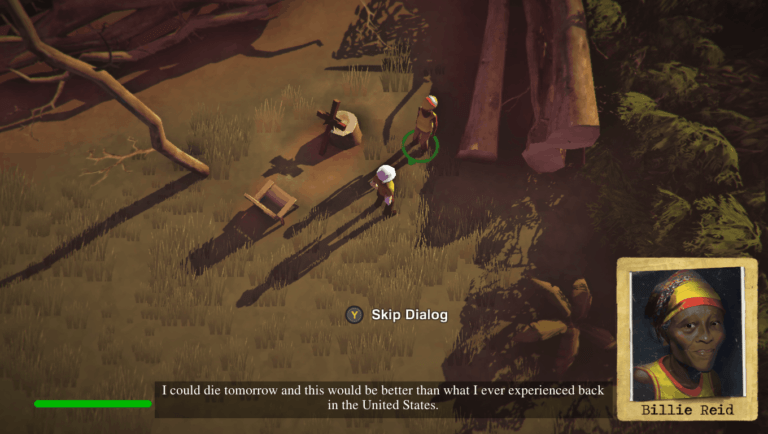 Game Name: The Church in the Darkness

The Church in the Darkness by Paranoid Productions

When I started The Church in the Darkness by Paranoid Productions, I was tasked with rescuing my estranged nephew Alex, who had joined a mysterious settlement that could be best described as a cult.

The leaders of the camp, Isaac and Rebecca Walker, have attracted many people to live with them in the middle of the jungle. This place grows its own food, and guards shoot trespassers on site.

Isaac and Rebecca talk via a blaring PA system about how the United States has failed and how socialism is the best way to stop wars, economic inequality and social injustices. 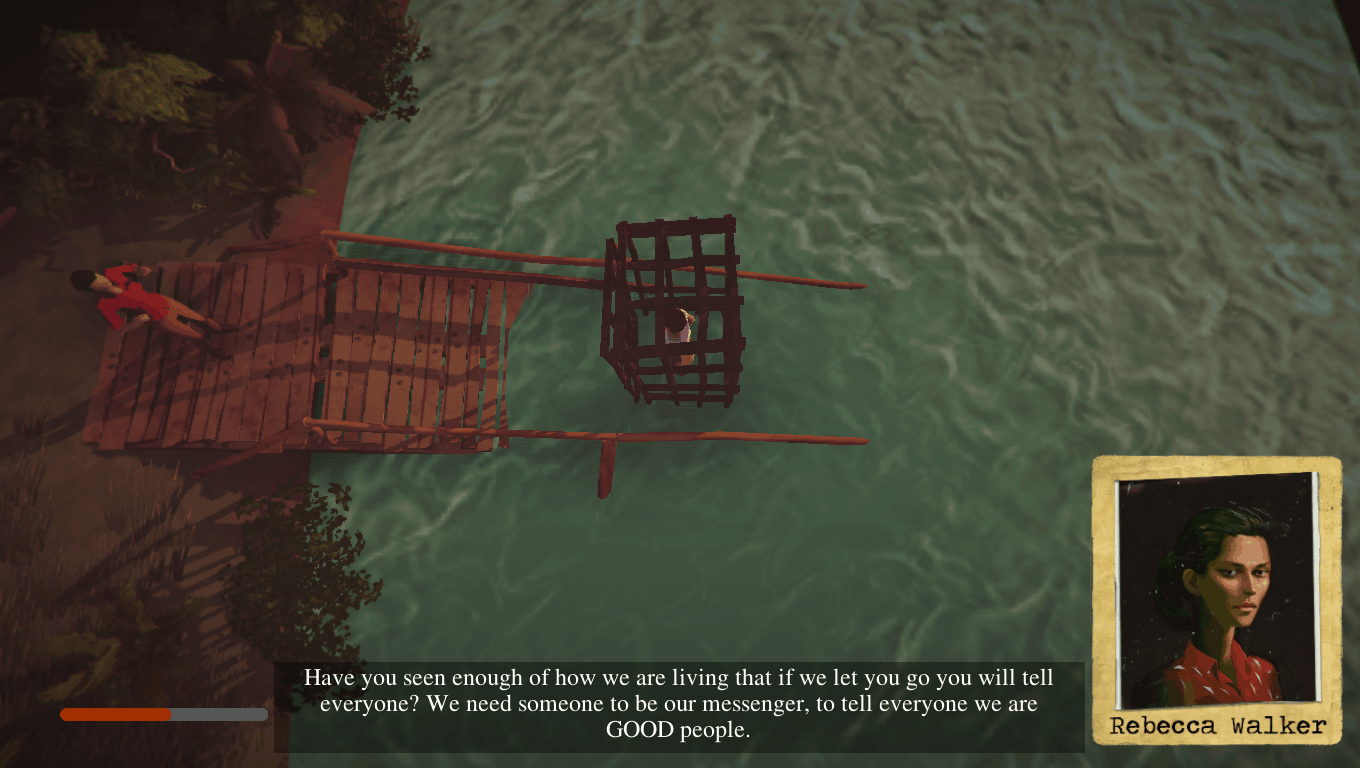 As one would expect, outsiders are not welcome, so stealth plays a major role in this game’s mechanics. Sneaking around guards’ vision cones is essential; otherwise, you risk being quickly killed or captured.

I was also given the freedom to also kill or subdue guards if I wanted to – either take them out with a gun or knock them out with chloroform. The game has plenty of offensive and defensive items to utilize during the search for Alex.

The main way to find items is to scavenge. Every building in the game’s map can be explored. These structures contain desks, cabinets or chests, each with a number of items: medical kits to heal, metal shards to destroy alarm boxes, even clothing that helps reduce NPC vision cones.

White chapels around the map usually have better items and helpful information that highlight important NPCs on your map. You’ll scavenge for items frequently, so thankfully there are plenty of places to find them.

This game also implements some Rogue-lite elements. For example, Alex, Issac and Rebecca were in a different spot every time I started a new game. Items are also randomized. The map stays the same, and guard placement is unchanged, but items and objective locations are different every time.

The game will also randomly pick one of a handful of helpful NPC you can talk to at the start of every play-through. This helps play-throughs feel different from one another to a certain extent, although dialogue options don’t change and the core objective stays the same, so these tweaks are not drastically game-altering.

Stay in the Darkness

All these elements make for a stealth game that creates genuine nail-biting moments. Death is permanent, and all progress is lost if careless mistakes are made. Narrowly dodging a guard’s vision cone while carrying a knocked-out NPC is always exciting.

Its stealth mechanics are fun, even though they can feel too simplistic at times. That being said, it can also create some frustrating moments because guards can be very aggressive and will always kill you quickly.

Thankfully, a single play-though of this game will take no more than an hour, so frustration isn’t too high.

How you play the game decides how the game ends. There are 19 endings to find and a number of variables that can affect the outcome: kill all the guards, kill Issac, or even kill Alex, if you want.

These decisions make the endings different, and there are so many that it seems like a challenge to find all the different ones. However, as far as the endings go, they don’t end up being as satisfying, because the narrative in the game is minimal. 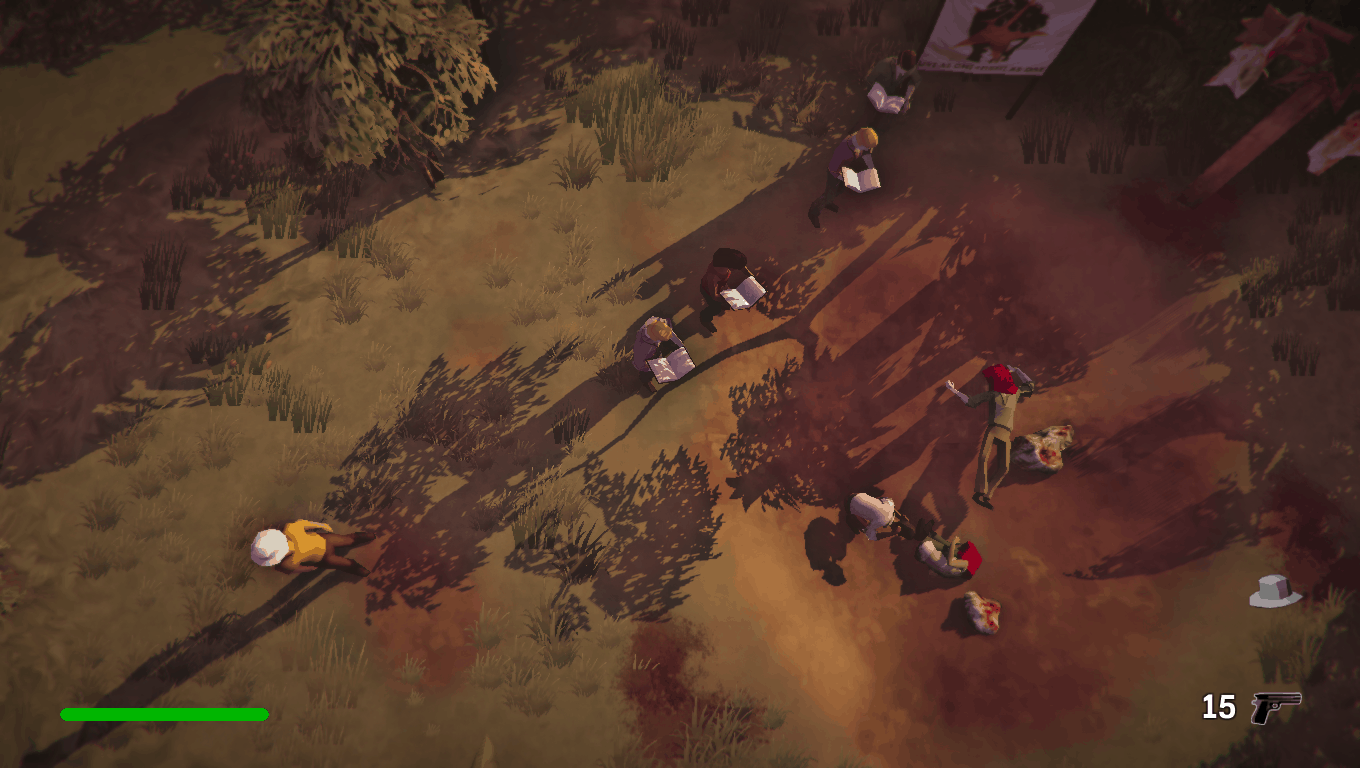 Don’t get me wrong; the game has fantastic world-building, but since play-thoughs are so short, there isn’t enough time to create a compelling narrative.

When I was scavenging for items, I found many documents of the other people in the settlement. These detailed their faith – and lack of faith – in the settlement or its leaders. But all this does is build the world further without necessarily building Alex, the protagonist or other notable NPCs.

Once you know Alex’s backstory, there is not much else to dissect or uncover in multiple play-throughs. Isaac, Rebecca, and other notable NPC motivations lack depth.

Visuals and especially sound design help create a believable setting. Small touches like posters on walls and unfinished architecture show a settlement in its early stages. NPCs lack detail but stand out from the environment.

As mentioned earlier, Isaac and Rebecca preach via a PA System. This makes the game feel more atmospheric. It’s blaring and nonstop, which really makes for an eerie and inescapable vibe.

The game also has mock hippie style songs that play, which adds so much character to the setting. Across the board, the game just has fantastic voice acting. The audio design is definitely a highlight, adding so much to the experience.

For a game that encourages multiple play-throughs, the lack of deeper stealth mechanics and things to do within the settlement make replaying it less appealing.

It’s simplistic but I still had some fun playing through the game a number of times just to see what outcome I would get. Just don’t expect much depth when it comes to narrative and stealth mechanics.

The Church in the Darkness is available via the Nintendo Game Store, Sony PlayStation Store, the Microsoft Store and Steam.

Watch the official trailer for The Church in the Darkness below: 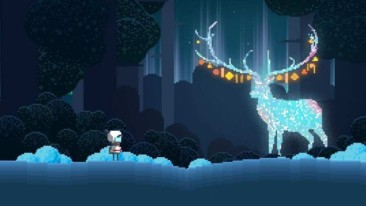 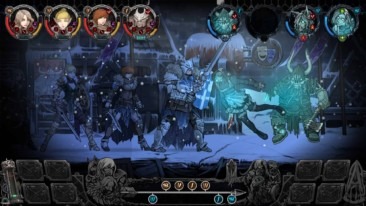