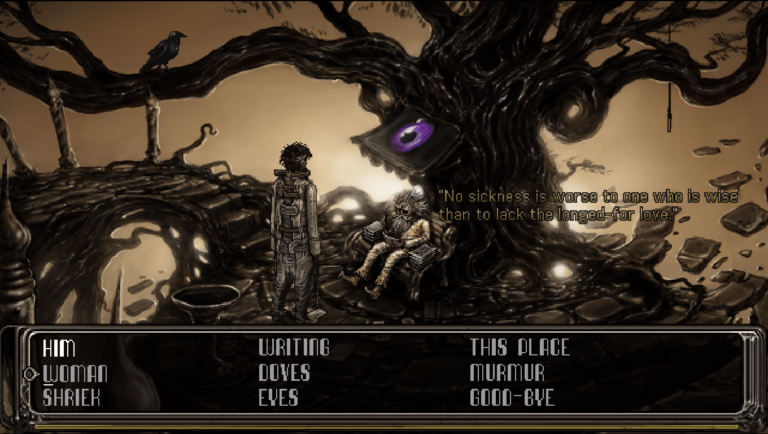 Strangeland starts off with an amnesiac protagonist in an unbound straitjacket wandering around an odd place, the titular Strangeland. Soon upon arrival, he witnesses a blonde woman in a hospital gown repeatedly jump down an abyss-filled well.

He then makes it his mission to help find her, as he senses some attachment to her. Soon after the protagonist learns about a dark entity, simply called The Dark Thing, which seemingly has a hand in controlling Strangeland. 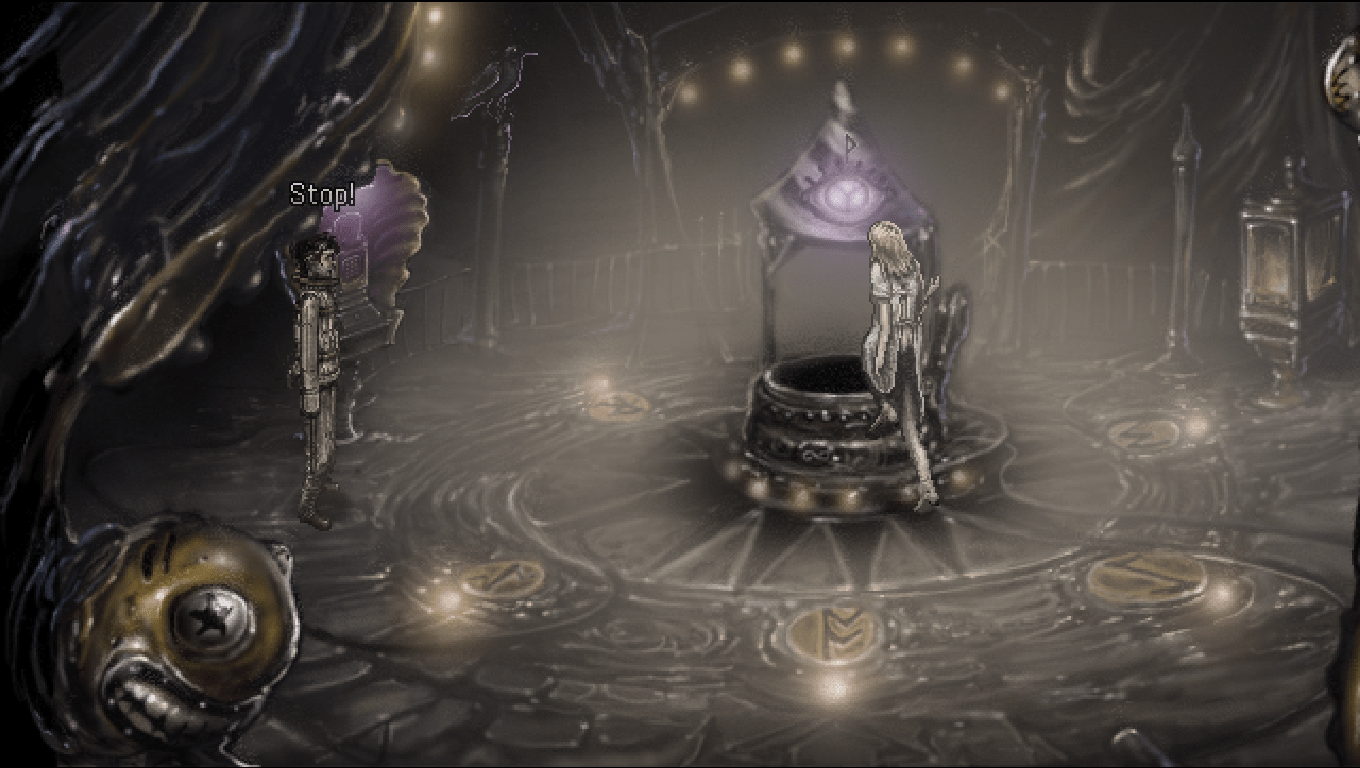 A Circus of Hidden Meanings

Strangeland is a place made up of floating islands featuring carnival tents, talking ravens, disturbed NPCs and grotesque imagery. There is plenty of symbolism and hints as to what is really going on, bits and pieces to create conclusions as to what is happening underneath all the seemingly incomprehensible. By the end of the game, I had a good idea as to what really happened between the protagonist and the blonde woman.

And I think that’s a strength of this game. It doesn’t outright spell a lot of things out in terms of its narrative. It lets the player figure things out without a lot of plot explanation. I really liked the vague plot details and made for an engaging mystery to uncover.

If there is one criticism I would level towards the narrative, it’s that I felt like there wasn’t enough character development to make me care even more about the protagonist and the blonde woman. It’s tricky because the game wants to be vague and let the player figure things out, but I feel like this comes at the expense of letting players generate a greater emotional attachment.

Here is where your mileage may vary, because I personally cared about their predicament, but I know that others may want more depth there to make the journey and its conclusion even more impactful.

Strangeland deals with narrative themes like trauma, depression, suicide, guilt, hate and death, and it manages to tackle them in a mature way. They don’t feel ham-fisted or added just for shock value. These themes are woven into the game’s narrative in an engrossing, sophisticated way, and by the end, at its core, it has something profound to say.

Since the world is strange, expect to do things that live up to the game’s name: dissecting a rat filled with coins, shooting skulls to win a prize, picking up a small human homunculus to feed a hungry creature. There are plenty of odd things you’ll be doing throughout this three-hour game, but not in an overly gross or disgusting way.

Like some modern narrative-driven adventure games, most puzzles are straightforward. Every item you pick up has a use, and there isn’t a whole lot of confusion as to what to do next. This made the game more engaging, as I found myself not getting bogged down via puzzle-solving or needlessly padded-out gameplay experience. It made it easier to sink my teeth into its succinct, nicely-paced narrative.

The game also does a fantastic job of giving out hints. Besides a payphone that gives direct hints, the protagonist and NPCs make helpful comments about objects or puzzles.

There was one puzzle where I had to burn something via a hot object. When I interacted directly with it, the protagonist said something along the lines of “I don’t want to reach that close; it’ll hurt me,” so I was able to gather that I had to combine the item I wanted to destroy with something else first. The game does a great job throughout with its puzzles to make sure players don’t get stuck.

Beauty and Horror inside the Carnival Tents

It’s also clear as day that a lot of work went into this game. The game uses highly detailed pixelated art. There are plenty of close-up shots of characters to offer even more detail to NPCs and the environment which give it a nice cinematic flair. There’s a moment in the game where it cuts to the blonde woman taking off the skin of her face like a mask. During another instance, the game zooms into an old man’s face, showing his hollowed-out eyes. There is so much detail and care put into creating this weird world. 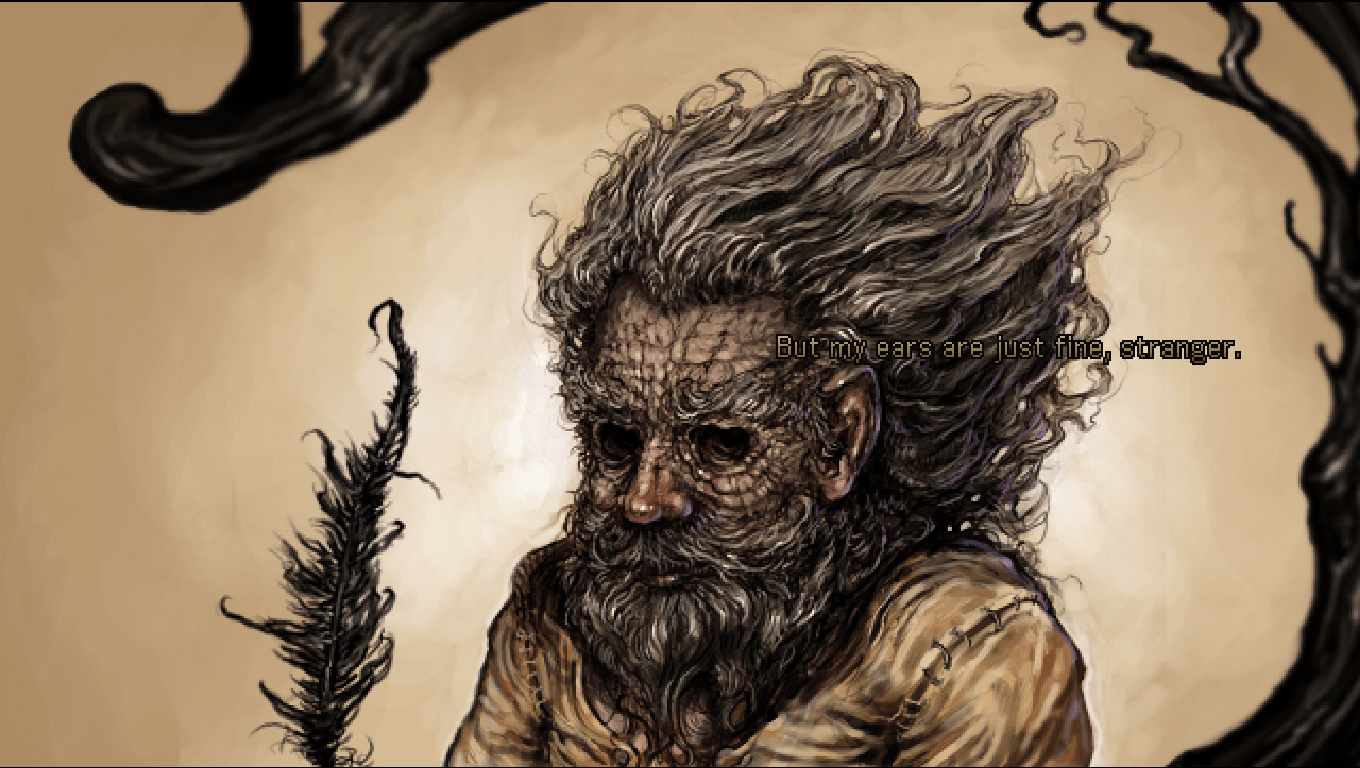 Strangeland also features an ambient soundtrack that really helps add to the game’s atmosphere. It’s a largely ominous collection of dark synth tracks that makes everything feel more seedy. I particularly liked the old man’s theme, which I feel felt had the perfect blend of darkness and odd whimsy.

The voice acting also deserves to be praised. The vocal cast across the board does an immaculate job of bringing characters to life. Abe Goldfarb stands out as he delivers a fantastic performance for the protagonist. He conveys the right amount of disdain and heartache without feeling forced. It’s a performance that makes the protagonist’s journey even more engaging.

Strangeland is a fantastic point-and-click adventure game that has a lot of work put into it. Everything about it is highly polished and wonderfully executed. If you’re a fan of the more ambiguous, less direct narratives, then I’d recommend it. Its vague, symbolic narrative throughout may be a turn-off for some, but I found it to be highly engaging.

Strangeland is available via Steam.

Check out the official trailer for Strangeland below: 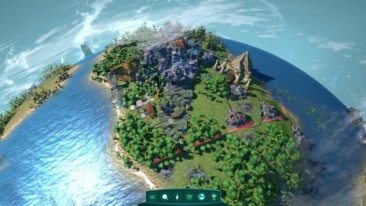 Silicon Dreams Review – How Many Questions Does It Take?