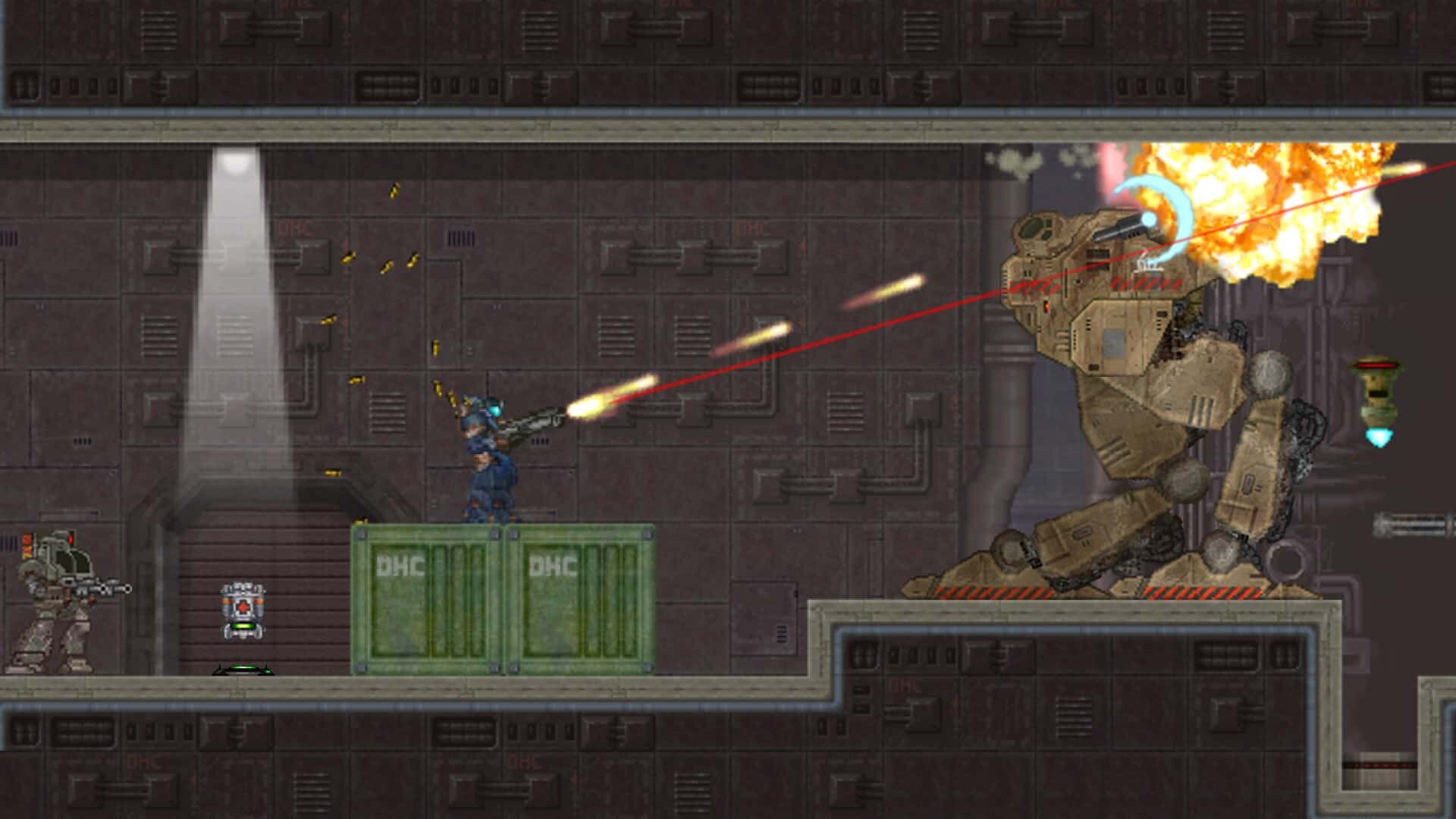 Steel Strider – What We Think:

Taking on the genre of retro run’n’gun games is no small feat. Still, this is what Astro Port is trying to do with their latest game Steel Striders. Imagine the year is 1990 and a spiritual follow-up to Super Contra has been released. In this setting, Steel Striders really fit well, in all aspects.

This is both good and bad for the game, seeing how in 2015 we expect something more from games, even retro celebrations like Steel Strider. Continue reading to find out what makes Steel Strider miss becoming a pure retro celebration game and end up being a one-hour killing frenzy that you later forget all about. 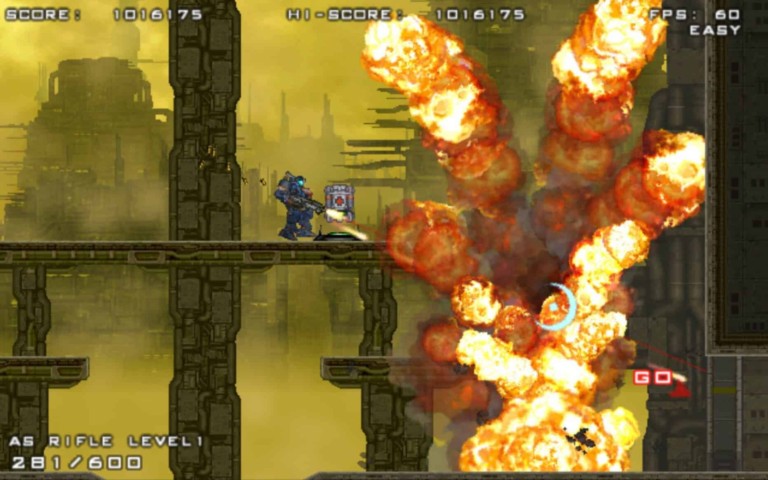 Steel Strider is set in a future where a galactic war finally has ended, but with it fighting still occur between criminal organisations. It is you role as a member of a highly secret organisation with the goal of world peace to stop the fighting. This excerpt would be everything you need in terms of a story to enjoy this game, but instead you encounter walls of text trying to make this cliché story something more than the side-scrolling shooter that it is. Skipping the story completely – only giving us a short background – would have fitted this game perfectly, which makes the badly written story in Steel Strider bring it down more. The Box Around My Head

But the story isn´t the only thing bringing Steel Striders down. While starting the game and entering the settings, I was stunned to discover only two screen resolution options, one being 640×480. That means no way to play the game in 1080; a clear step in the wrong direction for a contemporary retro game. The core concepts for these titles should be to try and get that great feeling these games use to have, combined with a resolution fit for today’s computers, no matter what graphical and aesthetics the game is going for.

Another small detail I noticed while navigating the menu is that Escape closes the game down completely, something that became quite annoying after a few times. 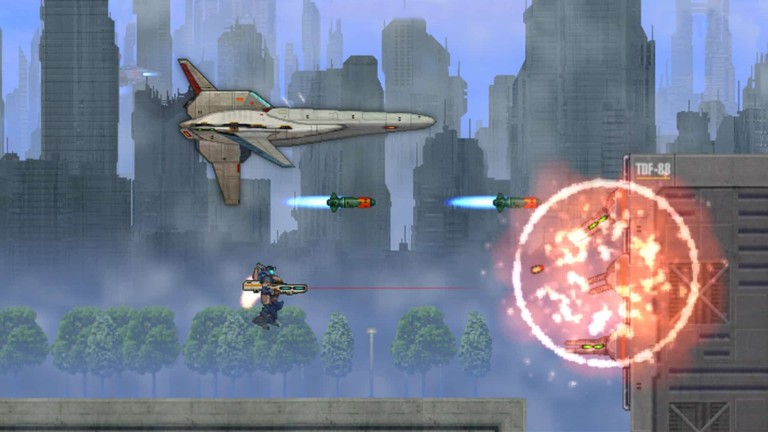 That said, Steel Strider manages to get the core of a classic run’n’gun done almost perfectly. The controls are smooth, the waves of enemies match the fast pace, the simplified UI and classic weapons work perfectly for the Mech-killing machine that you are.

Steel Striders managed to inflict that “just one more” feeling every time I finished a level or killed one of the returning and somewhat generic bosses. But adding the twin-stick aspect to a game filled with rather boring backdrops and way too few enemies, doesn’t make the game better in any way. 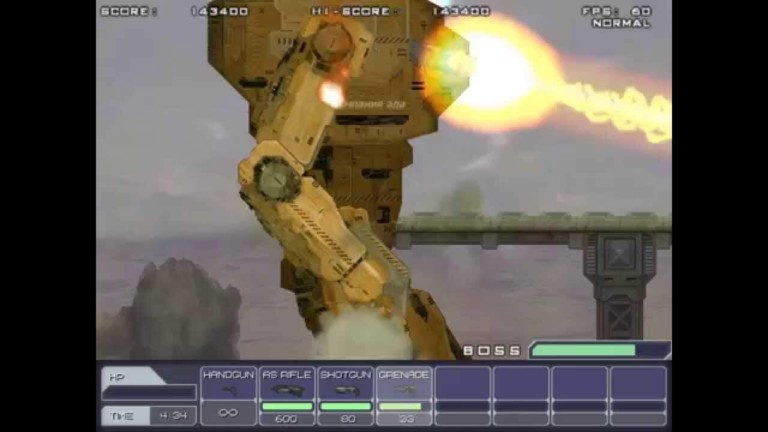 While it clearly flirts with Super Contra, Steel Striders never feels as fleshed-out as some of the bit-era or ms-DOS games did. Steel Striders has the core elements nailed down, the great controls and fast-paced killing, but the environments, the story, the opponents, the feeling of the game, make it a less-than-interesting alternative than its classical predecessors. While something with Steel Striders kept me going for that new level, I´m guessing it had more to do with the hopes of the game becoming better which, sadly, it never did. 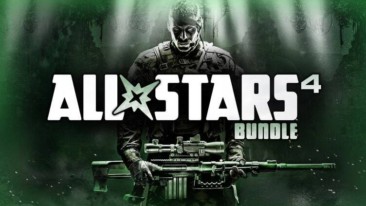 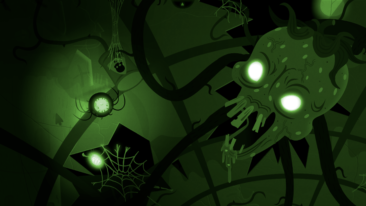