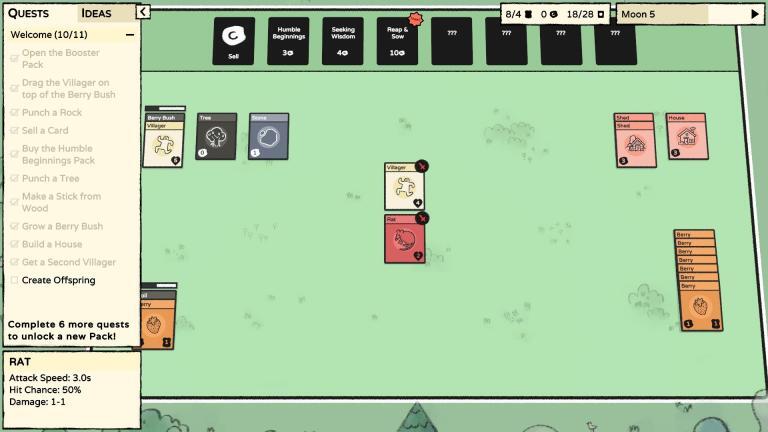 Stacklands is deliberately reductionist and diminutive. Crayon drawings of a pastoral landscape, fattened stick men, and abstracts to represent avatars on the wee cards that burst out from splinter packs like the juice inside a squirt gum candy. This is mostly what I expect from Stacklands, the strategic, real-time resource management game from Sokpop Collective.

Time Keeps on Stackin’…into the Future

I am incensed by the audacity to make this game timer-based. Seriously? You want me to sit here and babysit you real-time? I have stuff to do. Can’t we do this turn-based, async style? But nope, they are gonna keep me on a normal or long moon cycle to manage my finite card set and find a path to survival, expansion, and wanton proliferation.

I get mad at the RNG governing the Berry Bushes essential to my existence. Sometimes they pop, sometimes they don’t, forcing me to sell off my hard-won resources (I will never get back the time back in my life I spent watching my slow villager convert that wood into sticks). 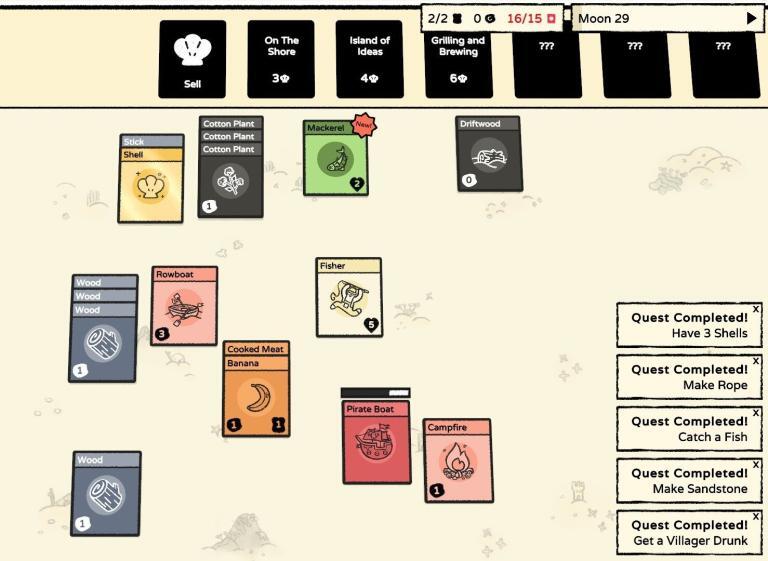 Then something interesting happens – I unlock the next lane in my market above. OK, something. The moon comes and I better eat. Two rations per person, I find out. If a food has greater value than two units, it will flow over to the next villager. The second lane pops off another villager. So I have a worker-placement, resource-management, deck building-esque thing going on where artwork clearly isn’t the priority. I discover the timer: a bar slowly filling up over the Moon bar on the top right, where I also find the normal/2x speed/pause button. In fact, I will come to discover that when the game is paused, I can still rearrange and stack cards, before turning the flow of time back on. Rad!

Ho! What’s this? A Strange Portal card appears on my tableau. Its timer moves lugubriously, ominously from right to left as I endeavor to extract as many berries as time will allow before the night comes anew.

Holy crickets – a rat just came out of that portal! What do I do? I drag my villager over to it (which is how everything in Stacklands works: you drag things on top of things to form moveable stacks).

When it is in close enough proximity, a sword icon appears on both my villager and the rat. Back and forth they go, exchanging blows until the rat dies, leaving behind some bones and raw meat. The next time this happens, I realize that mob cards actually hop around the tableau, and thus I too can outrun them simply by placing my villager cards further away from them, or placing cards between us, which buys me time for as long as I can manage this game of card-tag. Interesting. A baby action-Roguelike, while we’re at it. Once you’re engaged in combat, though, there is no escaping.

I graduate to the next lane in the market/tech tree and proc a blister pack of “Idea” cards: recipes for new combinations for resources to forge new outputs. Homes, cabins, quarries, stews, weapons. Dropping a villager on a spear upgrades them to a militia.

Some cards are locations that I can perch on and wait a very long time indeed to earn from them exotic goods. Some are keys that can unlock chests. Sometimes I have to sell my keys before I find chests. Some are events, like the trader, a.k.a. Travelling Cart. I can’t for the life of me figure out how the hell this card works. I mean, I put in a good 10 games, and there is no joy…until I eventually decide to actually check out the Cardopedia, where hovering over the Travelling Cart tells me exactly what to do. 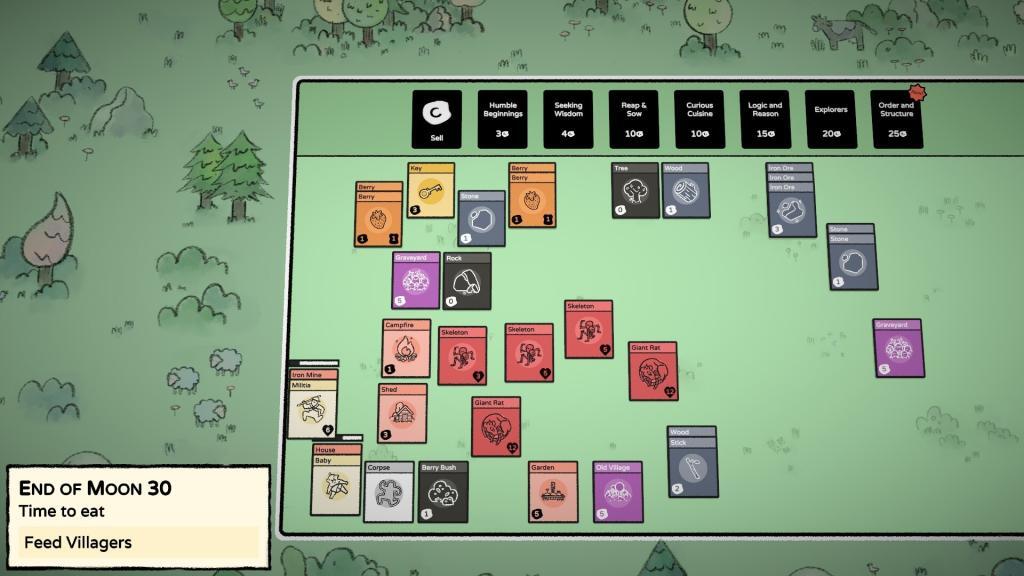 I am always thinking about this balance of time, supply of essentials, preparedness for war and calamity, and proliferation and evolution. Before I know it, I like the timer, I like the stacks, I like the progression.

I am a little sad, though, that once I unlock recipes they stay unlocked for my next game. Sure, it’s cool that my failures lead to gains over time, but I wonder if at some point, having unlocked all the things, the game will run its course.

And I don’t WANT that.

Because I want to see what happens when I camp the Plains or the Catacombs. I want to see how to improve my hang-time even though I have to discard down to my hand limit at each moon cycle, which becomes increasingly difficult because I have built more and more infinite resource-type cards in the interim. Quests lure me onward to as-yet-undiscovered horizons: “Get a Dog”? “Find the Catacombs”? Is this going to end when I do?

Let me drop a hint like a monkey drops poop: not as soon as I thought. 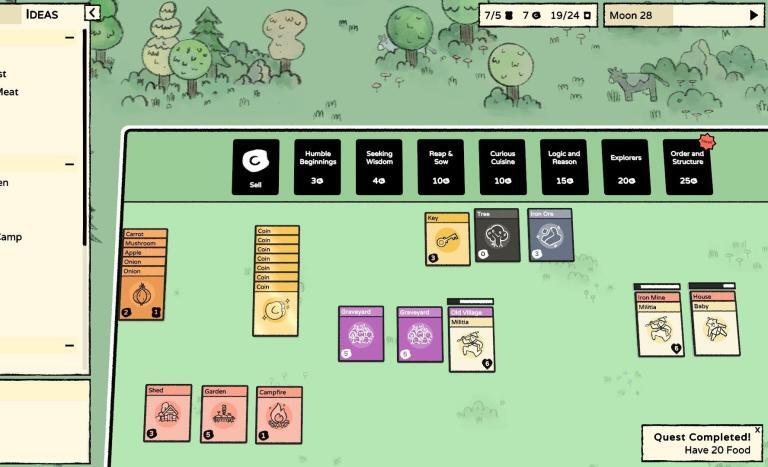 There is a lot more content to this game than I expected, and a big content update in July added a whole other space to visit with a slew of new items and ideas. I’ll leave the surprise for you to discover (or research on Steam).

Tough decisions, so many to make, so little time that I don’t even have a breath to review all those now-unlocked ideas I worked too hard to ideate before the next calamity or resource scarcity befalls me, damn it, I am having too much fun to get back to my Vampire Survivors marathon. That is saying a lot. Believe me, I love my roast chicken on undead hunts.

I’ll stop there because I have to get back to playing before the sun comes up.

Stacklands is available via Steam.

Watch the trailer for Stacklands below: 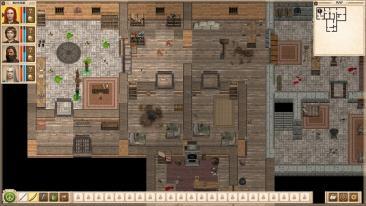