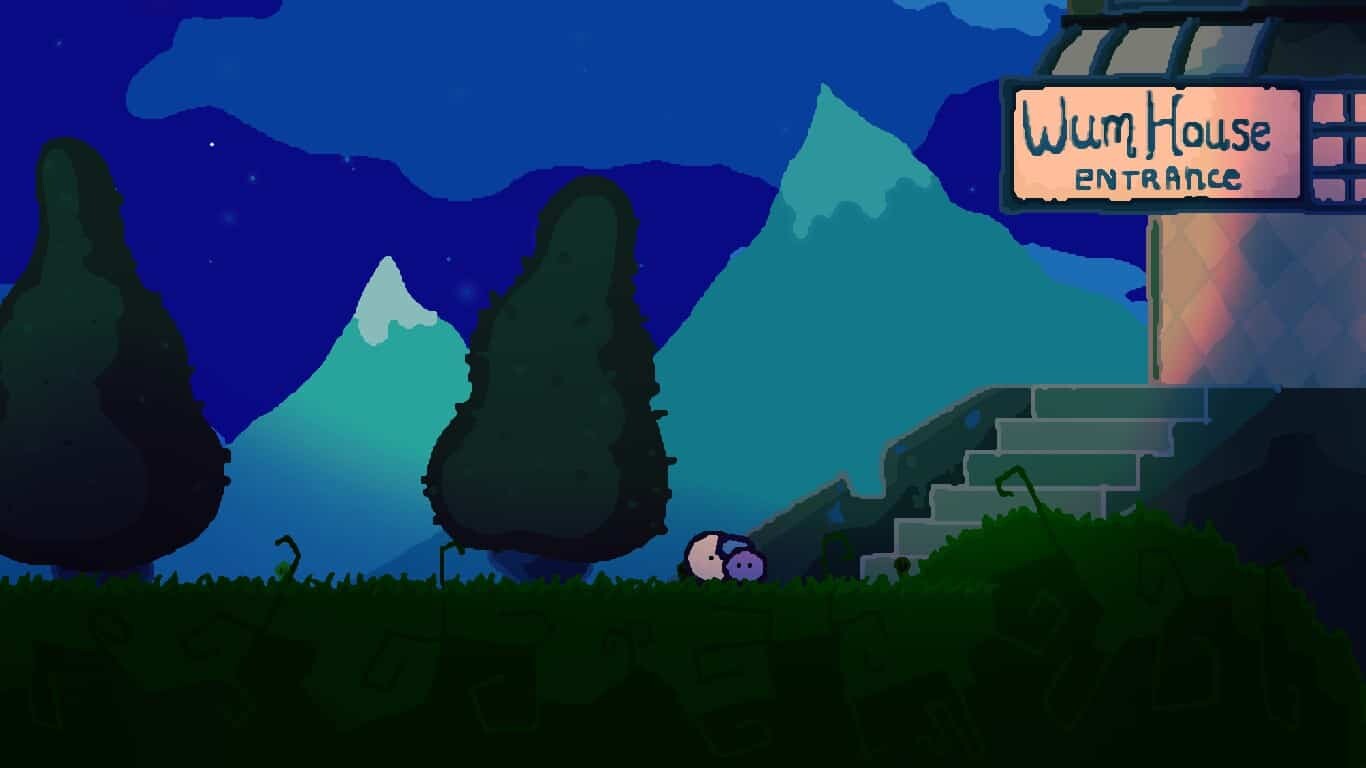 It all began with a chubby Wum, an ice cream cone, and an angry landlord. After being forced to abandon its home following an ice cream spillage, a lonesome Wum sets upon a journey to find somewhere it belongs. Searching high and low across the land, the Wum encounters various creatures, intriguing enemies and unlikely friendships. Within the marvelous world of Wuppo, this adorable little ball of Wum is difficult not to admire. Not to mention, its eternal longing for ice cream is certainly relatable.

Developed by Knuist & Perzik, Wuppo is the package deal. It delivers humor, charm, story, and challenging boss battles, circling the journey of a cute blob known as a Wum. Early on, it happens upon another of its kind known as Allesweter, who provides great detail on the history of Wums and other species.

To expose more fun facts, film strips are scattered throughout each environment and can be brought to Allesweter to unveil a short and sweet history lesson. However, some film strips deliver more comedy than information, adding a little extra flare to the overall content. Undoubtedly though, the constant cuteness is bound to make anyone smile. 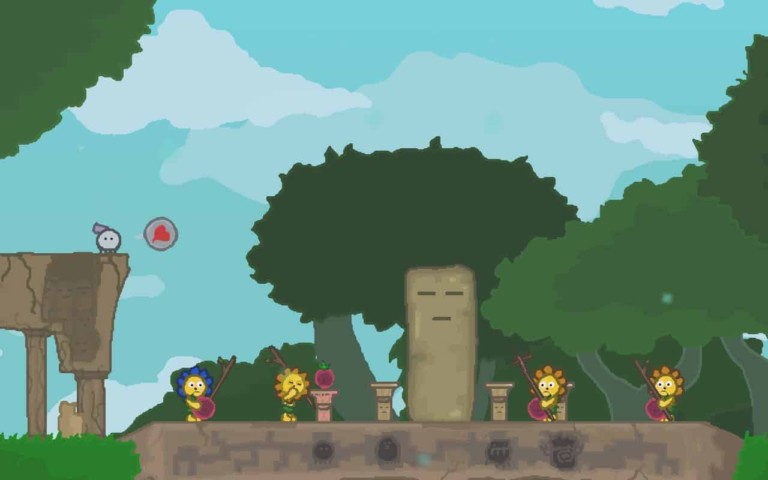 For example, as the little Wum travels onward, it stumbles into creatures known as Bliones. At first, these funny looking flower-like individuals are on a mission to destroy the Wum (if the Wum happens to accidentally attack them first), but eventually the Bliones practically devote their lives to the little blob. They’re quite amusing, because Bliones are definitely not the brightest bulbs on the tree, but they’re pretty dang adorable. Oh, and occasionally helpful, of course.

You Abuse The Ooze, You Lose

Aside from the delightful qualities of Wuppo, the gameplay packs one heck of a punch. Adventuring as a Wum isn’t as precious as it may appear. Its weight actually fluctuates throughout, depending on the fattening foods it devours for health or how much damage is taken. Surprisingly, its weight does affect certain moments. The smaller and lighter it is, the faster and higher it can jump. It’s common sense, really. 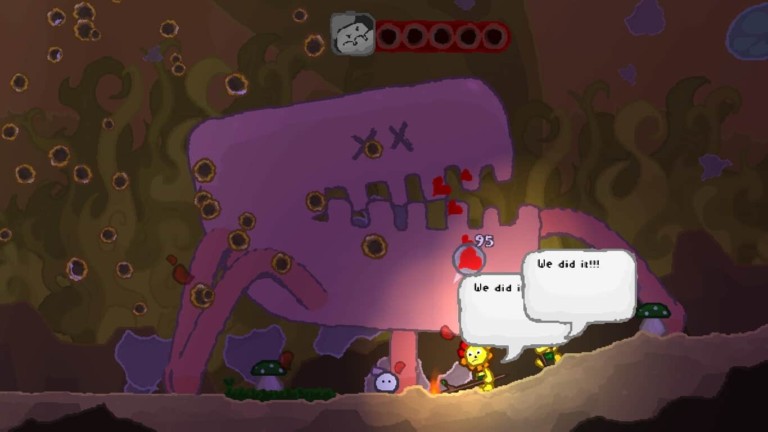 In all honesty, the maddening boss battles made my blood curdle, rage amplifying with every Wum death. At times, luck was assumed to be the only factor that mustered me through the impossible. Luckily, health items and weapons can be assigned to specific keys or buttons (controller support is definitely a plus), so healing the tiny Wum is easy as pie. Granted, I wasn’t even surprised when I was annihilated by a giant bakery monster, but I must admit it was incredibly rewarding to put it to rest.

Not only does the Wum battle some extremely massive creatures, it also has its charm put to the ultimate test. How the Wum reacts in certain conversations will affect the number of Happy Points it is rewarded. If it is appreciative and caring, it has a higher chance of receiving said points, which are ultimately its health.

Trust me – you want all the Happy Points imaginable. The Wum can also acquire money or “smurt” to purchase items via shops distributed amongst Wuppo. Smurt unfortunately isn’t commonly attained, so I found it necessary to spend it wisely on a random store artifact. You know, the important things. 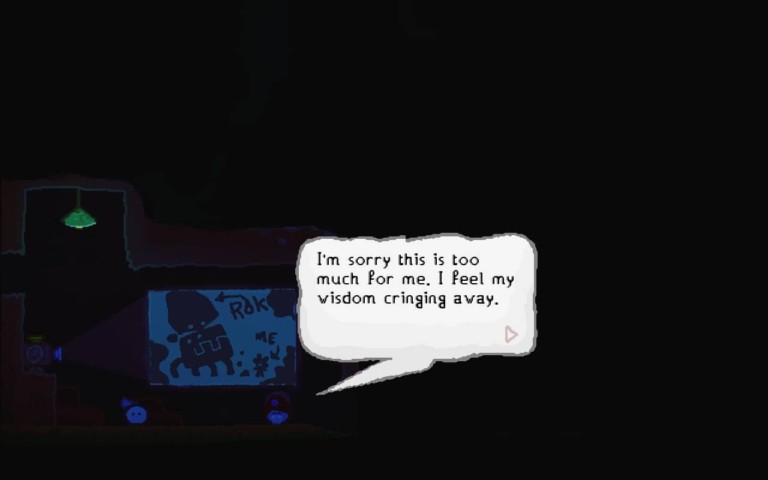 Various puzzles are also applied in Wuppo, and as long as a little wisdom is brought to light, they’re nothing to really stress out about. Of course, I certainly experienced moments where I wanted to surrender to Wuppo due to inevitable confusion, but there was something very melancholy about a homeless blob. What kind of person would I be to let it wander aimlessly without a place to reside?

Not to mention, a helpful little bird companion named Denksnavel is around to offer assistance and insight, depending on the Wum’s current predicament.

Overall, Wuppo is a very strange game with bizarre (yet adorable) creatures and random dilemmas. The Wum is no ordinary hero, but is rather just looking for a place to call home again. Though some battles are extremely infuriating and a lot of the game doesn’t make much sense, Wuppo is a breath of fresh air and truly swept me off my feet.

Wuppo is available via Steam.

Watch the official trailer for Wuppo below: 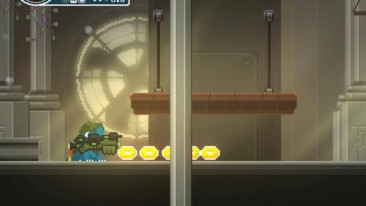 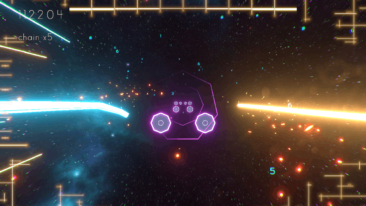