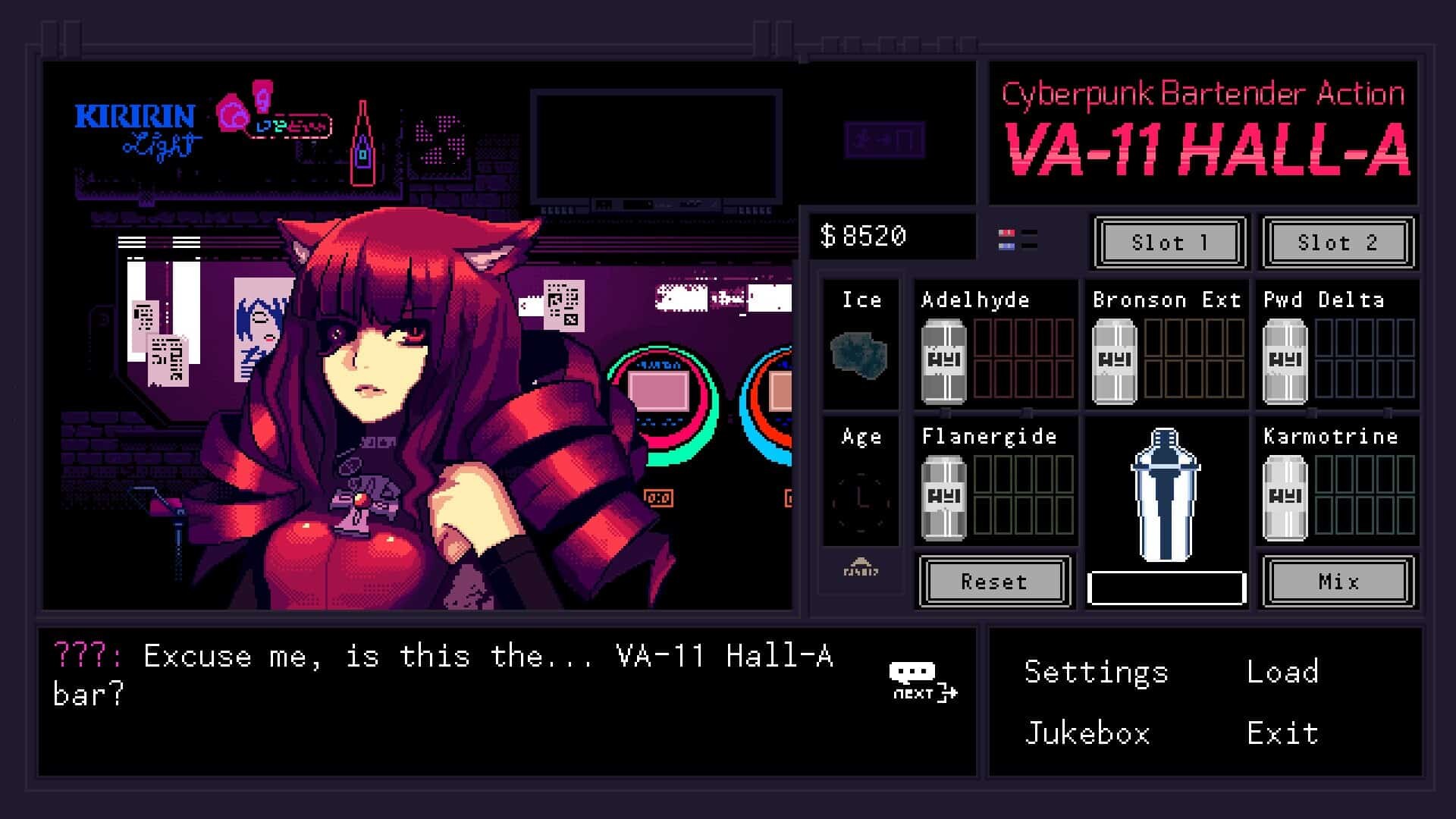 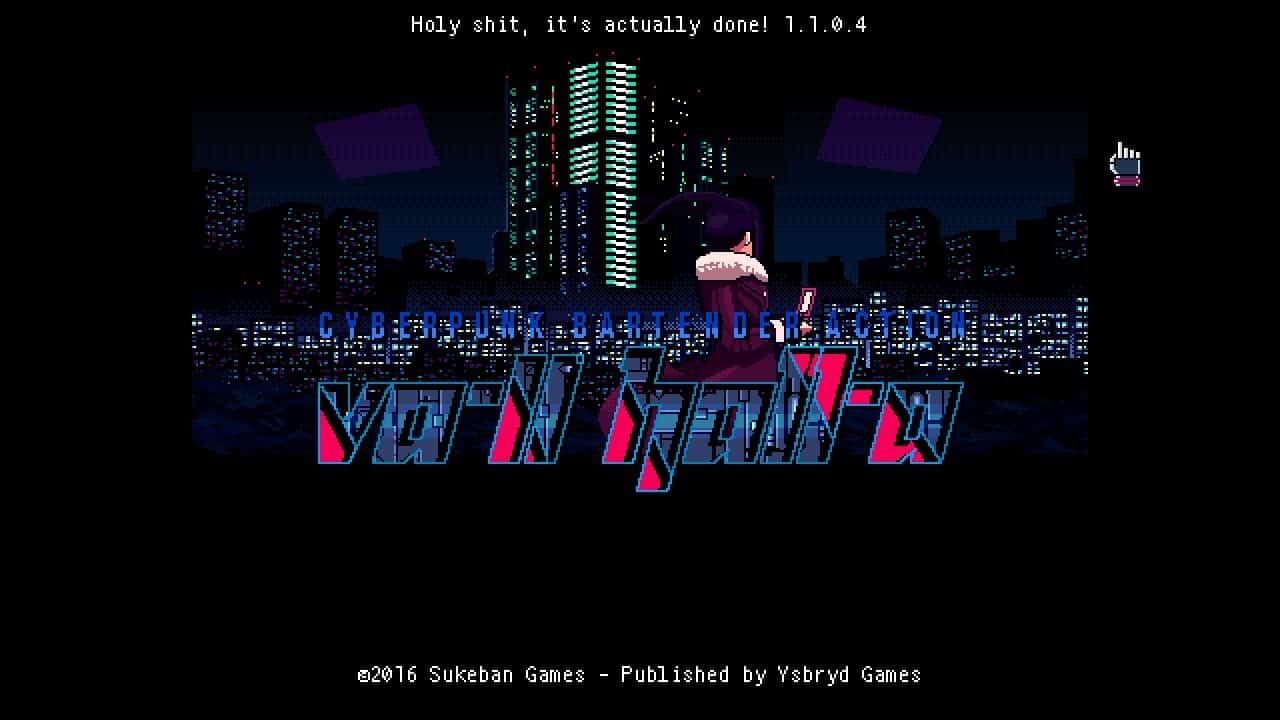 VA-11 Hall-A, more aptly referred to as “Valhalla,” attempts to define itself immediately.

Valhalla is the name of a grimy dive bar in the year 20XX. Told through the perspective of bartender Jill, the purpose of the game is to mix drinks for patrons and then attempt to enjoy life outside of work. The latter involves winding down by frequenting online message boards, fraternizing with other staff, shopping and even paying bills.

The interface of the game remains stagnant for the majority of play, with the phrase “Cyberpunk Bartending Action” brazenly emboldened on the top right of the screen. Does Valhalla live up to this title? In a literal sense it does, but it all depends on how it’s interpreted. 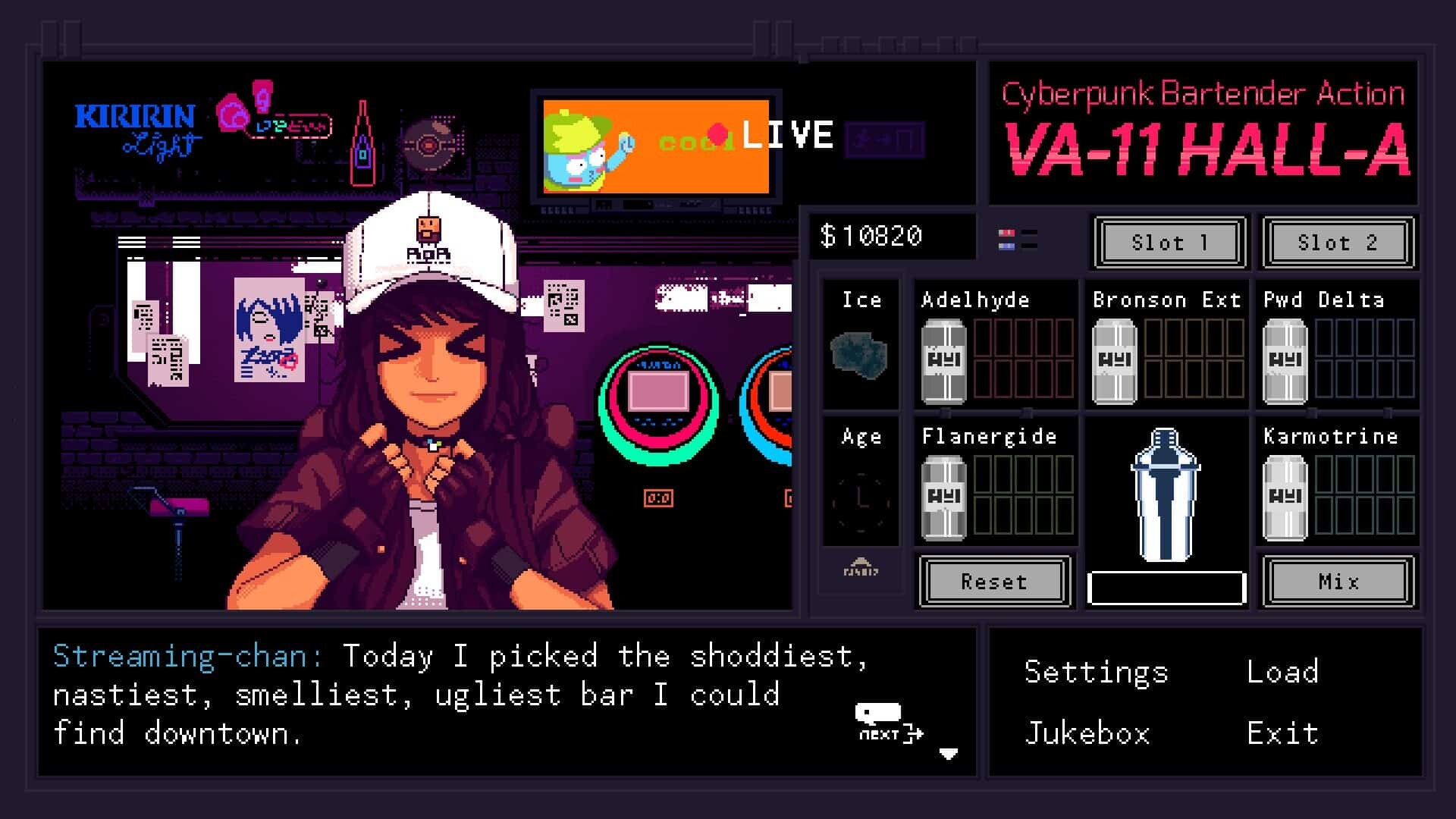 Well, What’ll It Be?

Let’s dissect each word of this self-proclaimed title, starting with cyberpunk. According to a number of definitions of the word, Valhalla is absolutely a cyberpunk title. Set in a world where robots and androids as well as technologically modified humans are commonplace, discord and crime run rampant in the streets. Valhalla itself is the bar in which human and non-human alike congregate to escape the harsh reality of what lies outside its doors. It’s gritty, dark and its characters are very…”adult.” This aspect of the game really helps Valhalla stand out as something out of the ordinary.

Next up is the bartending element in Valhalla; as each day is broken up into two parts (before and after Jill’s smoke break), Jill is only tasked with preparing anywhere from four to six drinks a day. There is a list of 24 drinks and a couple of promo drinks, each with defining tastes and qualities. Someone may ask for a classy drink or a girly drink, or perhaps order a specific drink by name. Drinks themselves are made by reading the preparation directions on the left side of the screen and preparing them in the mixer on the right using a series of clicks and drags. 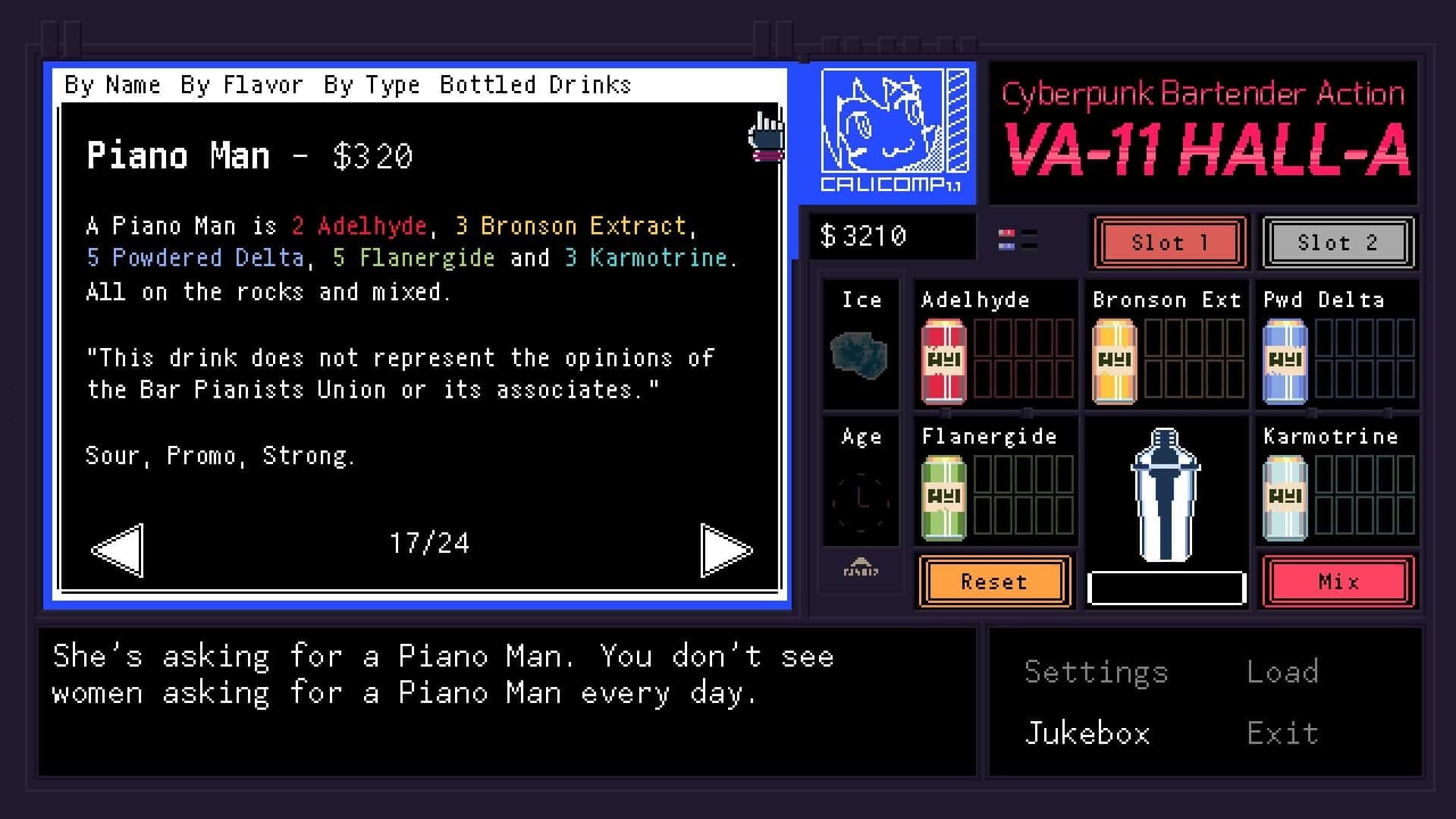 It’s All About Chemistry

Cocktails in this cyberpunk universe are created by combining certain amounts of five fictional chemicals. Drinks need to be either served on ice or aged, as well as mixed or blended. There’s no real challenge in the cocktail-mixing portion of this game. Occasionally the name of the drink is listed underneath the instructions, but not always, as the game tends to punish those players who choose to blast through the story of the game without paying close attention. However, sometimes messing up an order isn’t a bad thing, as it will open up a new conversation branch with the patron.

So yes, there is some bartending in the game. This brings us to our next dissection of the title: action. Once again, this is also subjective.

A very story-driven game, Valhalla is a visual novel. Any action that takes place in the game is described to Jill, and usually happens just outside of the bar or on news reports. This aspect of the game depends on how invested each player involves themselves in the story. Certain conversations may seem like mundane filler, but in reality just another piece to a larger story giving a sense of the state of the world. Is Your Waifu Too Lewd?

A robust soundtrack accompanies Valhalla, allowing the player to choose handful of songs out of dozens. These are played from the jukebox throughout the day. These ’80s-inspired chiptune tracks are very reminiscent to the soundtrack of another game I reviewed previously, Megamagic: Wizards of the Neon Age. As a whole, the soundtrack is quite enjoyable and fits in well with the game’s theme.

A lot of the crude elements of this world are further amplified by a lewd script, complete with every profanity under the sun and pop references running the gamut from Seinfeld to more niche-oriented fare like Hatsune Miku.

Subculture plays a huge role in the script. Interactions between Jill and her clientele are chock-full of either references to or parodies of North American and Japanese subculture. Internet message board culture is also parodied, specifically Japanese 2chan and its North American counterpart 4chan. The references are precise and easy to spot, bringing just the right amount of humor to an otherwise dark script. 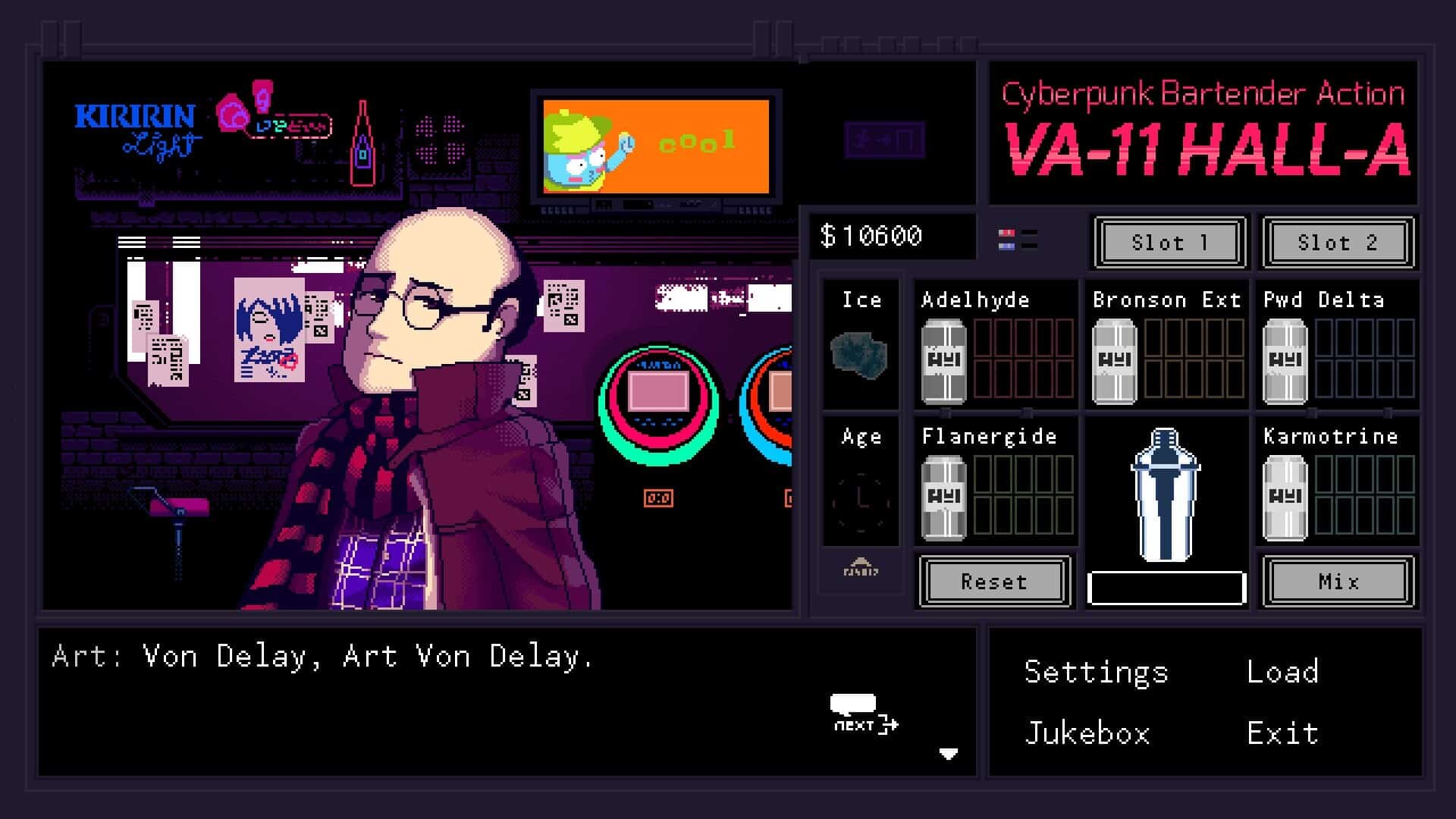 Shaking It Up in More Ways than One

Valhalla is a game about interactions with just a dash of bartending. As it has developed quite the fanbase online, certain fans see this as a sleeper hit, the next Stardew Valley or Undertale. As with anything that becomes very popular quickly, there are also many people who are quite outspoken about not liking the game at all. As with any game that leaves a mark in the landscape – it polarizes opinion.

Personally, my opinion may be biased as a fan of visual novels and Japanese subculture. Keeping that in mind, I really enjoyed this game. The script keeps the player engaged, there are multiple endings, and the characters are complex.

The game’s domain name “waifubartending.com” should be a direct indication if this is a title for you or not. I suggest taking the developer’s advice. Grab some drinks and snacks. Sit back, relax and enjoy VA-11 Hall-A.

Watch the official trailer for VA-11 Hall-A below: 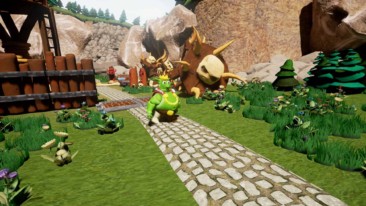 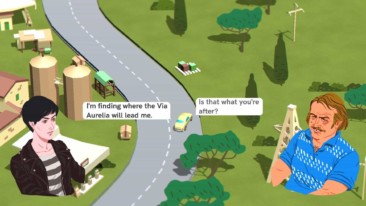