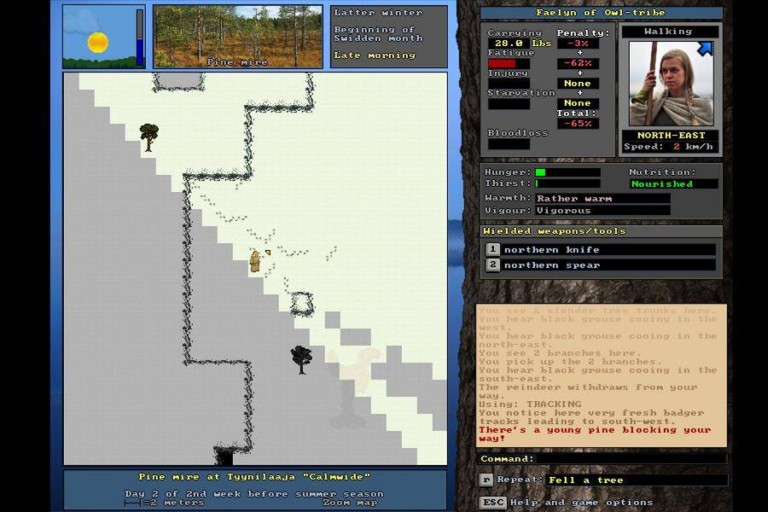 UnReal World – What We Think:

UnReal World is a survival simulation game created by a team of just two developers: Sami Maaranen and Erkka Lehmus. Whilst the game has only just appeared on Steam, it has been around for a long time, having been in development for over two decades. Over that time, UnReal World has enjoyed considerable praise and collected a dedicated group of fans who enjoy its deep and detailed gameplay. It’s worth noting that UnReal World can still be downloaded from its parent website as freeware, despite being a paid purchase on Steam.

Rather than being set in a fantasy world, UnReal World is set in a low-fantasy Iron Age Finland, so you won’t be fending off orcs and dragons here; instead, UnReal World focuses on the details of day to day survival and the threats that a person has to face from the environment itself. Starvation, exposure, predators and other people are the greatest dangers in UnReal World. 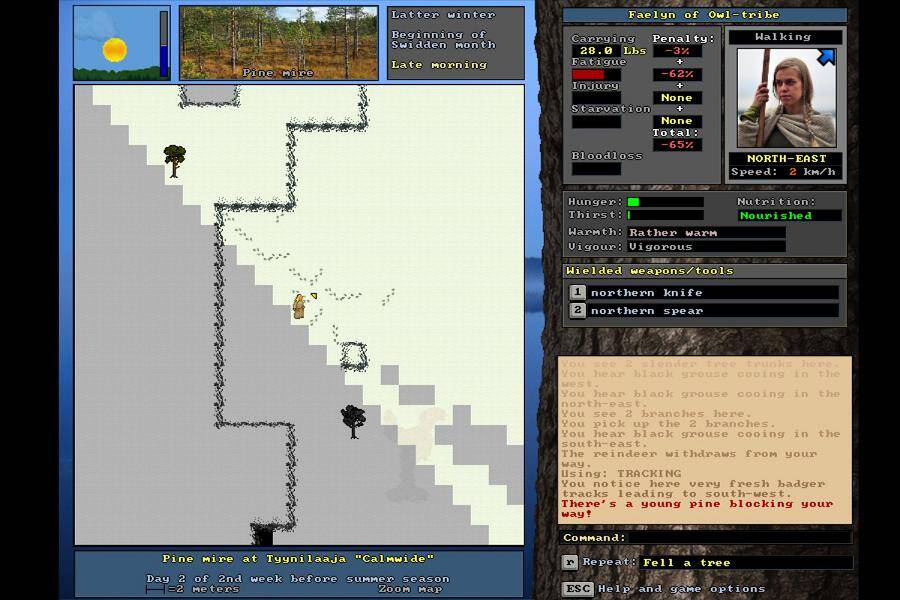 UnReal World offers options in droves; from the outset the game presents numerous possibilities, from quick and easy character creation options to setting up in detail and choosing a starting scenario. I chose to begin in the wilderness for my first attempt, a decision I would later renege on when I realized I was surrounded by pine forests in all directions and couldn’t find much of interest to do with myself. After wondering around and picking up sticks for some time, I decided to start again and begin near a settled village.

A World of Hurt

In this gentler environment I had a chance to get to grip with the control system, which is quite opaque at first. The mouse has a relatively minor role in UnReal World, and most of the game’s controls are through hotkeys and the slow process of menu navigation; this is not a game for impatient players. After pottering around in the village, I realized what I had been doing wrong in my first attempt; there are two maps through which you can explore the world: a zoomed-in local map (which I used exclusively with my first character) and a broader map which allows for much faster travel between key locations. Using this second map, I was able to explore the game properly. 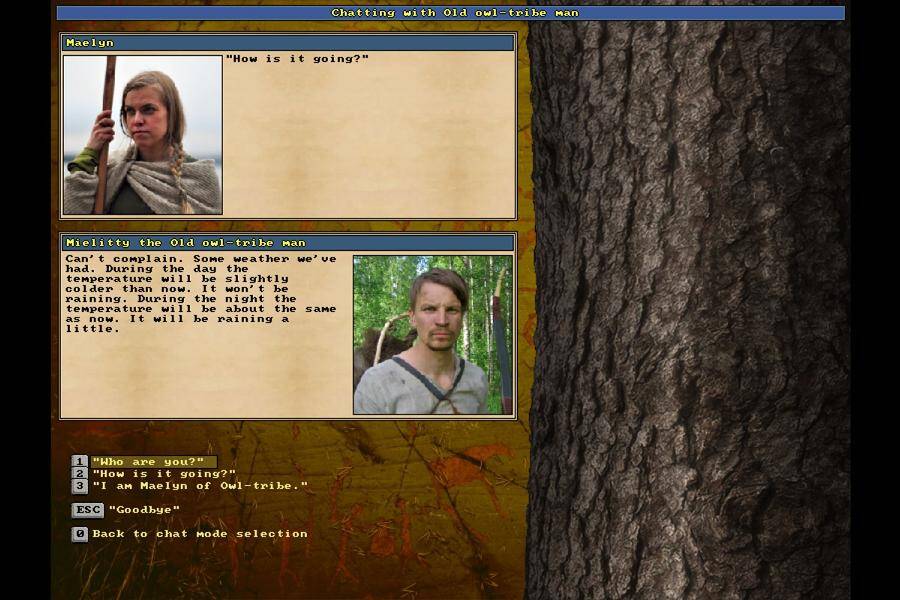 UnReal World’s character creation system allows for specialization in various key skills, and I focused mostly on combat (expecting the wild to be a dangerous place). I found the survival experience to be more quiet and atmospheric than action-packed, but I did learn a few things about how combat works. The game is mostly turn-based, and each movement the player makes allows time to pass. Chasing down potential food is more a matter of careful planning than it is about haste.

I learned my most important lesson about combat against non-player characters when I tried to steal some resources from the starting village: angry humans can make short work of a thieving traveler. The battle system is simple but effective, and the game presents plenty of options for trying (and usually failing) to get the upper hand.

Beyond combat, the depth of UnReal World is impressive. The skills system allows for specialization in numerous tasks, including fishing, trapping, cooking and more. Most skills are related to travelling or general survival, and the game emphasizes these basic concepts over anything more flamboyant. This is a simulator focused on creating a focused but rewarding survival experience. 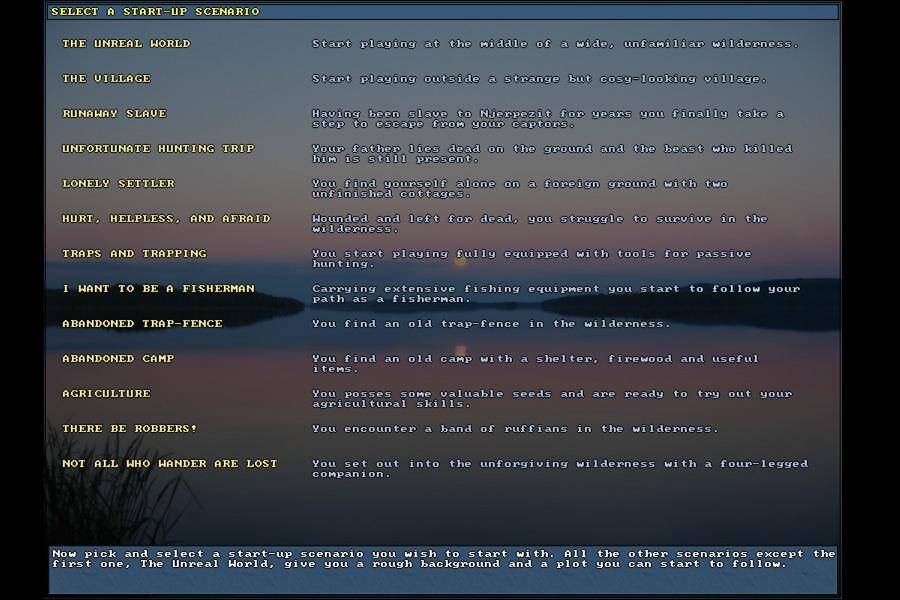 Visually, UnReal World will not excite. The graphics are basic and present only the minimum information necessary to understand the environment being explored. That being said, aesthetics are often in the eye of the beholder and, much like Dwarf Fortress, it’s possible to become completely engrossed in the game without the need for stunning visuals. The sound and music are similarly minimal, providing just enough to augment the atmosphere.

UnReal World is a hugely detailed survival experience that was around long before the modern titans of the genre existed. It remains an impressive and absorbing game that should appeal to anyone looking for an experience that values depth over aesthetics. A free version is available from the developer’s website, and it’s worth trying this out before committing to buy, as UnReal World certainly isn’t for everyone.

If you enjoy the game (or if you’re someone who simply can’t stand running a game outside of the Steam client) then it might be worth paying for the Steam version, as the developers certainly deserve to enjoy the fruits of their labor on this impressively complex survival simulation.

Watch the official trailer for UnReal World below: 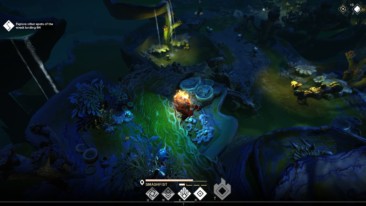 We Are The Dwarves – An Indie Game Review 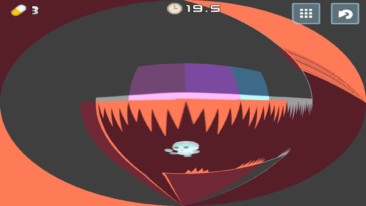