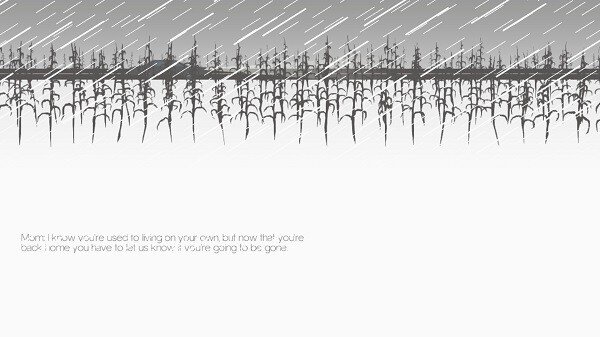 Three Fourths Home – What We Think

A bleak, partially interactive short story told through the unique conceit of a telephone conversation home during a drive through dangerous weather, Three Fourths Home sees you explore uncomfortable yet drearily ordinary family dynamics from the point of view of elder child Kelly Meyers.

Having recently dropped out of college and moved back home to rural Nebraska, you’ve gone on a long drive to sort things out, but you’re caught unaware by a sudden thunderstorm. As you drive through the wind and rain, the story of Kelly and her family reveals itself through a telephone call home to her worried family.

Unlike the numerous auto racing simulators on the market, you’ll instantly relate to the driving mechanic in Three Fourths Home, especially if you’ve ever spent seemingly interminable hours on straight, two-lane highways through rural America. The road doesn’t bend, so you don’t have to steer; just keep a finger on the right arrow key and your car moves inexorably forward.

The up and down arrow keys allow you to cycle through conversation options, when available. While you can select certain details in dialogue, however, the conversation moves toward certain fixed points regardless of your choices. This is a game about revealing a narrative, not creating one, so don’t expect to have much control over the outcome. 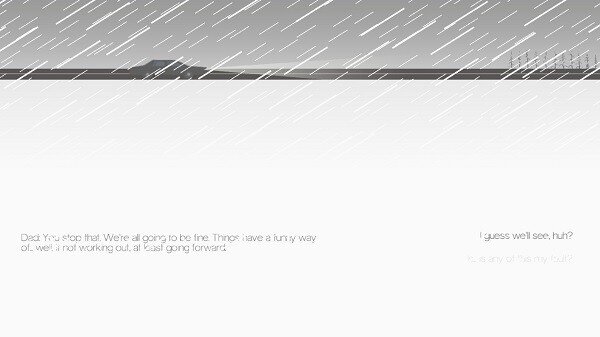 As your family at home passes the telephone around, you gradually get to know their foibles and their difficulties. Dad’s lost a leg through a work accident, and tends tomato plants and drinks too much beer (ostensibly it helps with phantom limb pain) to help distract himself from the family’s declining financial situation. Little brother Ben, on the autistic spectrum, has given up the guitar since you moved away but has recently taken up writing short stories. And mom’s just doing what she can to hold things together; the fact that you stopped calling home when you moved to Minnesota for college probably hasn’t helped.

It’s pretty everyday stuff, but the writing is exquisite, all the more because it’s delivered completely via dialogue. These aren’t cardboard cutout characters, but believable individuals with unique motivations and coping mechanisms. And if things occasionally edge toward Raymond Carver territory in that nothing seems to actually be happening, there’s the increasingly violent weather to provide narrative tension, especially when the tornado sirens kick in. 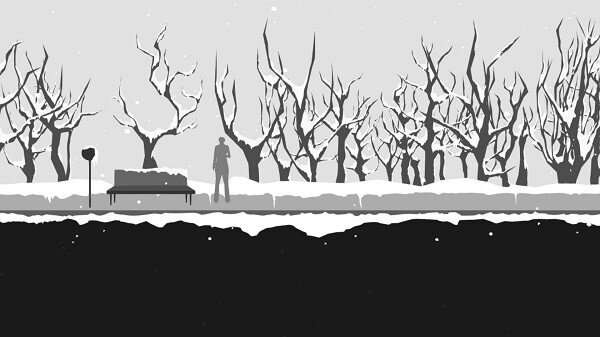 Those tornado sirens, along with the constant pelting of rain against your car’s windshield and hood, are as much a part of the storytelling mechanism as the text, as is the minimalist visual aesthetic, which consists for the most part of endless cornfields, with the occasional tree, building, or wind-buffeted bird to act as a sort of distraction. The new Extended Edition on Steam features an epilogue, also delivered as a telephone call but this time from a bus stop near Kelly’s college, to provide additional background and narrative heft. Bonus background material, including some of Ben’s short stories and Kelly’s final project for her photography class, is also included.

It all comes together to tell a very ordinary story in an extraordinary new way. It’s only a game in the very loosest sense of the word, and a lot of Twine and text-based gaming aficionados probably won’t even like it. The fact that it’s over in an hour or so, and that as a story with a definitive arc and ending, doesn’t lend itself to multiple play-throughs, probably doesn’t help. As an exploration of literature technique, though, it’s quite impressive—depressing but affecting—and it’s almost easier to imagine a work like this making a splash in the literary scene than the video game community.

Watch the trailer for Three Fourths Home below: 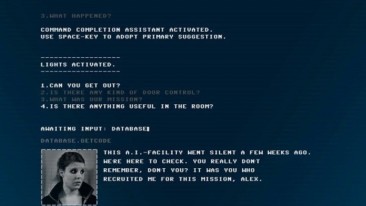 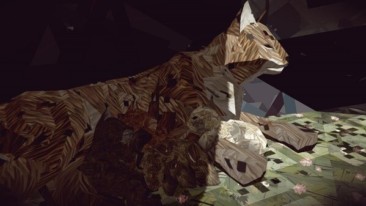